The imminent US tariffs on Chinese goods are expected to throw up some unexpected winners in Europe, a study shows. The gains for the European countries are only likely to increase if China chooses to retaliate. Move over Vietnam and Taiwan. The latest round of US tariffs on Chinese goods set to kick in on September 1 would also benefit the European economies, albeit moderately, a new report showed.

The gains would only multiply, if China retaliates with further tariffs on US imports, according to economists from the Munich-based ifo Institute.

US President Donald Trump announced a 10% tariff on another $300 billion (€268 billion) worth of Chinese goods earlier this month, escalating an ongoing trade dispute between Washington and Beijing that has seen the two sides slap punitive tariffs on each other's goods. China has threatened to retaliate to the latest round of tariffs even as it negotiates a trade deal with the US.

The trade dispute between the world's largest economies has weighed on global growth, even stoking fears of a recession. But a handful of economies in Asia such as Vietnam and Taiwan have so far benefited from the spat as more and more firms shift production out of China and US importers look for alternatives to Chinese goods. 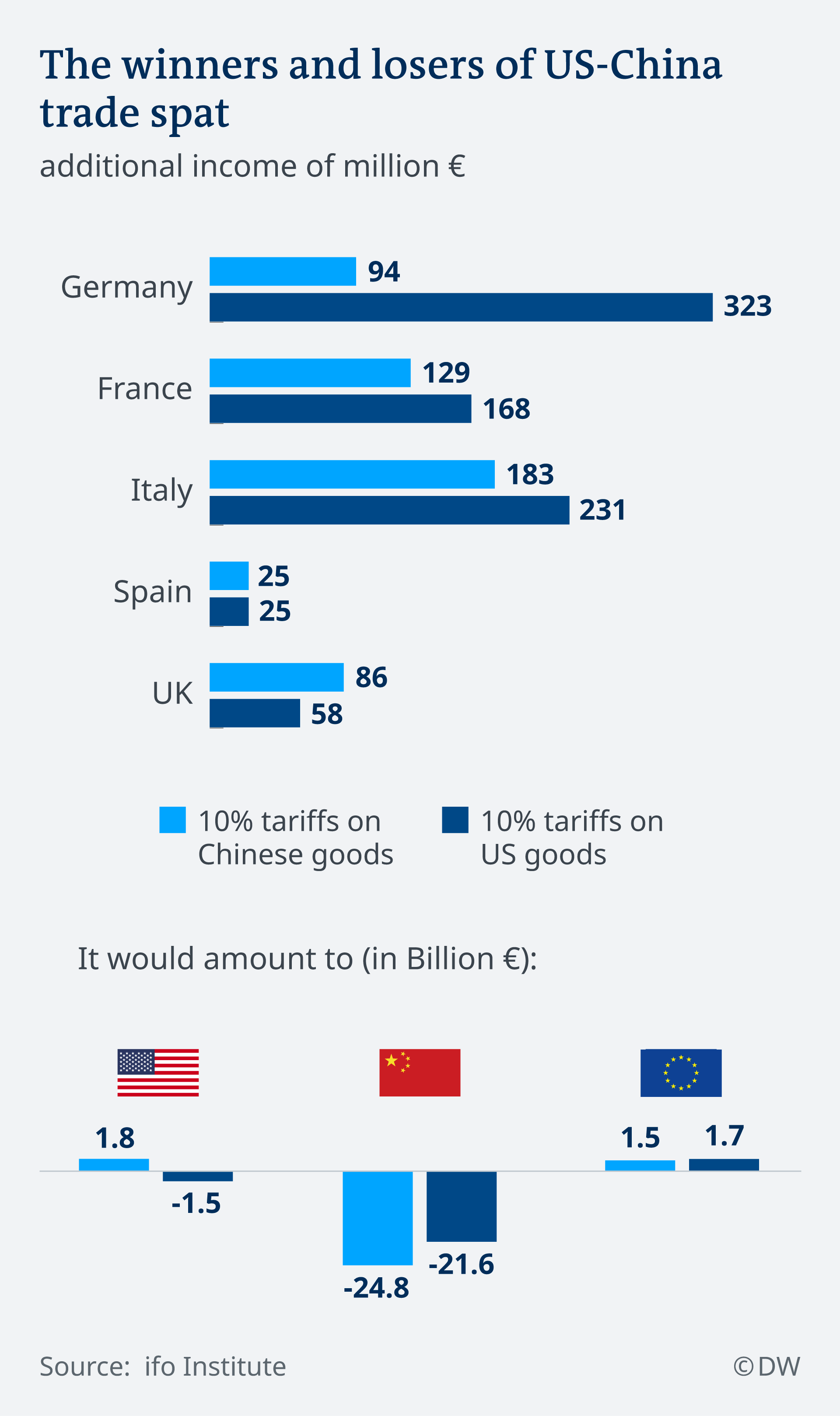 The ifo Institute report shows that even European Union economies will benefit from the trade diversion, provided the escalating trade tensions do not hurt the US and Chinese economies to an extent that they are forced to cut down on imports altogether.

The European Union is expected to see an additional income of €1.5 billion, if the US goes ahead with the 10% tariffs. Italy with €183 million would be the biggest beneficiary followed by France (€129 million) and Germany (€94 million).

If China retaliates with a further 10% tariff on US goods, the EU would see additional revenue of €1.7 billion. Germany would be the biggest gainer with €323 million in additional income. Italy (€231 million) and France (€168 million) would also significantly benefit from the Chinese retaliation.

Germany's export-driven economy is expected to be the biggest winner if China retaliates as Chinese importers would turn to Germany — a major producer of intermediate goods such as car parts — to source intermediate goods to avoid higher tariffs.

"If the barriers are higher between China and the US, they trade less with each other. But the demand for e.g. intermediate products to produce in China (and also in the US) would remain. So, they would look for third countries to buy the products they previously bought from each other," ifo researcher Marina Steininger told DW.

But increased exports from the EU to the US are likely to further strain the bloc's ties with Washington as they would enlarge its trade surplus with the US. Trump has threatened tariffs on EU goods over the trade surplus.

The report does not take into account the depreciation of the yuan or the negative effects of growing uncertainty for investors.

"The trade war will not be beneficial for anybody if it goes too far, including for the EU," Steininger said.

What's in a name? Clearly a great deal in the high-stake trade war between the US and China, which has escalated after US President Donald Trump named China a currency manipulator, says DW's Clifford Coonan. (06.08.2019)