US designates China a currency manipulator after yuan drop

The US Treasury has designated China a currency manipulator following the devaluation of the yuan. According to the department, the yuan's steep drop gives China an unfair competitive advantage in international trade. 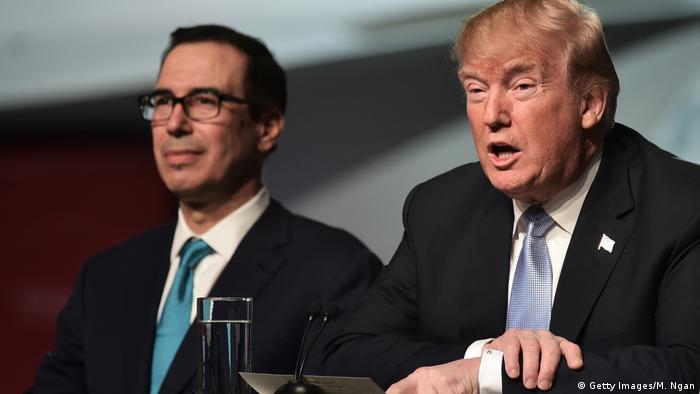 After identifying "concrete steps" that China has used to manipulate its currency while maintaining substantial foreign exchange reserves, the US government will engage with the International Monetary Fund to eliminate perceived unfair competition from Beijing, Treasury Secretary Steven Mnuchin (left in photo) said in a statement released late Monday.

On Monday, China let the yuan drop below 7 per $1 (8 per €1) Monday for the first time in 11 years, which gives exporters a price edge in world markets and lessens the effect of tariffs imposed by the United States. The devaluation prompted an irate Twitter outburst from Donald Trump (right in photo).

According to the US Treasury, a statement released Monday by the People's Bank of China openly acknowledged "that it has extensive experience manipulating its currency and remains prepared to do so on an ongoing basis." Therefore, Mnuchin, "under the auspices of President Trump, has today determined that China is a currency manipulator."

The US's own currency fell to a two-week low of $1.12 to €1 after the Treasury Department released its statement.

The 1.4% drop in the yuan's value comes after Trump vowed to impose 10% tariffs on $300 billion (€267 billion) of imports from China beginning September 1 — breaking a ceasefire in the trade war, which has disrupted global supply chains and slowed growth. The US Treasury Department charges that Monday's measure also violate China's G20 commitments to refrain from competitive devaluation.

The designation could pave the way for more US sanctions against China. In May, the Treasury Department declined to sanction China for manipulating its currency.

Read more: US to deploy new missiles in Asia 'sooner rather than later'

The United States last named China a currency manipulator in 1994, making it the last country to receive the Treasury Department's designation. The department named Taiwan and South Korea manipulators in 1988 — the year that Congress enacted the currency review law.