Can the EU′s Ursula von der Leyen fulfill her promises? | Europe | News and current affairs from around the continent | DW | 17.07.2019

Now that she's been elected European Commission president, Ursula von der Leyen can get to work realizing her EU vision. Who will she have to win over in the European Parliament, and which member states stand in her way? 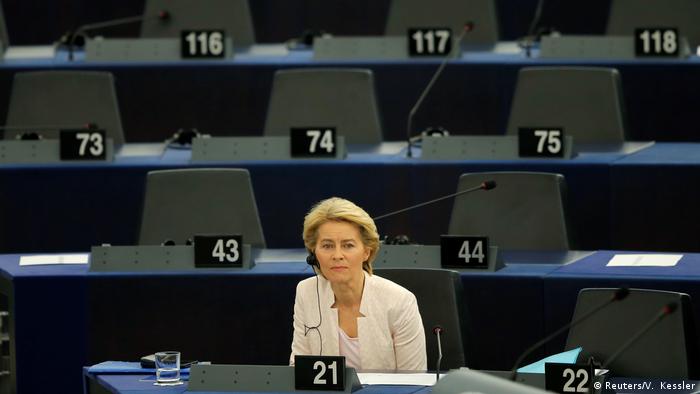 On Tuesday, MEPs narrowly backed Germany's Ursula von der Leyen to become the next president of the European Commission. In her bid for the European Union's top job, she made a range of promises and announcements, many of which appealed tremendously to Green and socialist MEPs. But whether she will actually be able to deliver on those promises over the next five years will not depend on her political prowess alone. She will require majority support in the European Parliament, and above all the backing of the Council of the European Union, which is comprised of ministers from all of the EU's 28 member states. When it comes to EU lawmaking, those two bodies are more or less equally powerful.

So, just how feasible are von der Leyen's policy pledges?

Von der Leyen wants to drastically cut carbon dioxide emissions and formulate a climate law within the first 100 days of her tenure. She wants carbon dioxide emissions to be reduced by 50%, or even 55%, by 2030. Thus far, the bloc's member states have struggled to agree on a concrete target. Some have proposed cutting emission by 40%, and the conservative European People's Party group — von der Leyen's ardent supporters — say their maximum cut is 45%. The Commission may suggest creating a new climate fund, and transforming the European Investment Bank (EIB) into a kind of "climate bank." However, the EU member states themselves are the EIB's shareholders and they would have agree to that kind of policy. So far, it unclear to what extent EU members will back von der Leyen's environmental policies.

The EU is deeply divided over how to deal with migrants and asylum-seekers attempting to enter the bloc via the Mediterranean or the Balkan route. The current Commission has suggested ways of better managing this, yet for years, EU members have failed to reach an agreement on the matter. Italy, Poland, Hungary, Austria and other states strictly reject taking in refugees, asylum-seekers and migrants. Some member states insist on binding redistribution quotas for refugees, though enforcing them has proven impossible. Even rulings by the European Court of Justice have been ignored. When it comes to these issues, von der Leyen most likely has more backing from the European Parliament than individual EU member states. When she praised various ongoing sea rescue operations, von der Leyen earned thunderous applause from MEPs — even though these operations are run by or originate from EU member states, not the EU itself. Von der Leyen's wish to expand the bloc's Frontex border agency to 10,000 agents by 2024 instead of 2027, meanwhile, looks extremely unlikely, as the member states have repeatedly rejected the move.

Designating who gets to be in charge of which portfolio will be a tricky "puzzle," as von der Leyen admitted to media. She wants to strike a balance between eastern and western member states, as well as between large and small ones, to ensure each have a say in key matters. She hopes this will go some way in reuniting the bloc. So far, incidentally, eastern member states have not secured any top jobs.

Von der Leyen also plans to "ensure full gender equality" among her 28 commissioners. She would like member states to put forward two candidates for each post. In September and October they will be vetted by the European Parliament, which will ultimately vote on whether it approves of the new Commission. EU law, however, stipulates that no candidate may be rejected on the basis of his or her gender.

Von der Leyen announced that Poland and Hungary will be vigorously investigated for breaching the rule of law. She also wants to introduce a new mechanism for punishing these kinds of violations. By doing so, she is taking a clear stand against the bloc's right-wing populists. Currently, however, the Council of the European Union is tasked with determining how to proceed with regard to Poland. The Commission has played its part. Meanwhile, the investigation against Hungary was not initiated by the Commission, but by the European Parliament. Here, too, the Council must now act. Poland's ruling national-conservative PiS party now claims von der Leyen only secured the bloc's top job thanks to its support, which is why Polish Prime Minster Mateusz Morawiecki said he now expects her to go easy on his country.

Von der Leyen was not the lead candidate of her parliamentary group in the run-up to the selection of a new Commission president. Instead, various EU heads of state and government proposed her candidacy. If von der Leyen opts to make the lead candidate system obligatory, respective EU laws would have to be applied. So far, however, member states have rejected this. It is unlikely they will voluntarily surrender their power to nominate the president of the European Commission.

The European Commission has unveiled an emergency plan to scale back gas consumption in case Russia totally cuts off supplies, which Commission chief Ursula von der Leyen has said is "a likely scenario."