Italy's foreign minister has called for recent problems posed by mass migration to be solved within a European framework. Italy has borne the brunt of a huge influx of migrants to Europe that erupted in 2015. 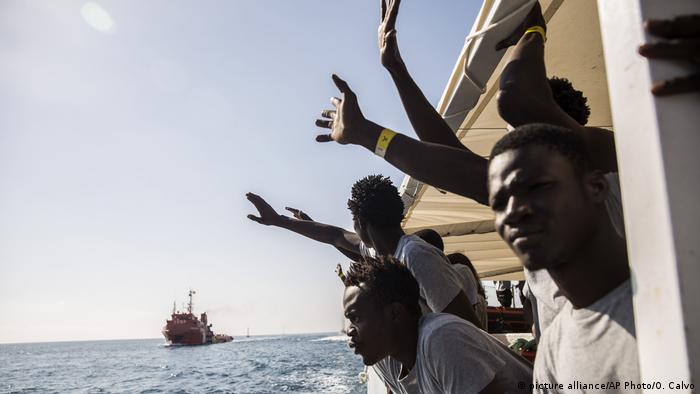 Italy's foreign minister on Sunday unveiled a raft of proposals aimed at restructuring the European Union's response to a migrant crisis that has strained relations between Italy and its EU neighbors.

Asylum applications should be filed at EU centers located outside the bloc, Enzo Moavero Milanesi told Sunday's Corriere della Sera newspaper. Those deemed eligible for asylum would be flown on chartered flights into the bloc, bypassing people traffickers and perilous sea journeys, the minister suggested in the interview.

"Those who have the right to asylum must be able to travel in dignified conditions, not in the hands of criminals," he said.

"Migrants are not looking for Italian, Greek or Maltese shores," Milanesi told the newspaper. "They are looking for Europe. Therefore we must find a solution within a European framework."

Incoming refugees should be distributed within the EU according to "objective and clear criteria," but "the system works only if a sufficient and significant number of EU countries joins," Milanesi said.

Milanesi also suggested European police and security forces should cooperate to fight against human trafficking and proposed greater investments in migrants' countries of origin — possibly financed by EU bonds — to help strengthen the social fabric of those countries.

Milanesi is expected to present his suggestions to his EU colleagues on Monday at the Foreign Affairs Council in Brussels. His German counterpart, Heiko Maas, said on Saturday that he expected "a decisive step" forward in the discussion.

Italy and Malta's recent reluctance to take in Mediterranean migrant rescue boats has reopened the thorny issue of burden-sharing among all EU member states.

Since Italy elected a populist government last year, the country has effectively closed its ports to rescue ships, meaning boats have had to stay at sea for extended periods.