The incoming head of the European Commission has said she will look for pragmatic solutions to the issue of migration. Ursula von der Leyen also spoke of plans for Italy's budget and her approach to Poland and Hungary. 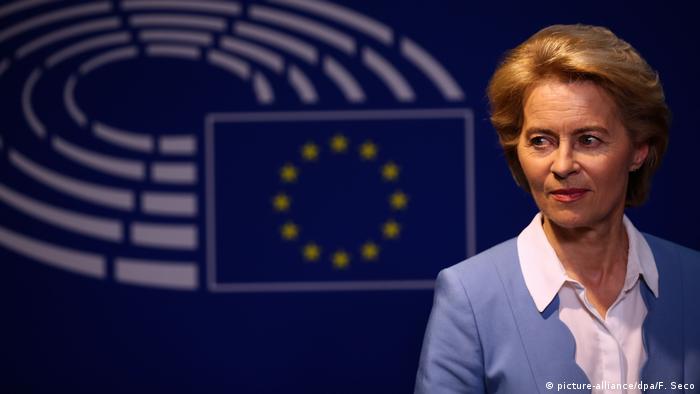 The incoming European Commission president has said she supports reforms to the EU's Dublin regulations, which are the rules that state asylum-seekers must file their applications in the first EU country they reach, often front-line states such as Greece, Italy and Spain.

"We must reform Dublin in order to achieve more fairness and burden sharing," Germany's Ursula von der Leyen told the Bild daily newspaper, in one of a series of interviews with European papers published on Friday. "I've never really understood why Dublin started with the simple equation: Where a migrant first stepped foot in the EU, that's where he or she must stay.

"Migration takes place by land or sea. We can only have stability on our external borders if we provide sufficient help to member states that are exposed to a lot of migration pressure because of their position on the map," she said.

Von der Leyen, who will take up her new post on November 1 for a five-year term, also called for taking a softer approach to central and eastern EU member states on the rule of law, saying that in disputes with Hungary and Poland "it is important to make the debates more objective."

Establishing the rule of law is the goal, "but no one is perfect," she told the Süddeutsche Zeitung. She added that financial sanctions against EU member states should only be a "very last resort after other steps have been exhausted."

The European Commission has already initiated infringement proceedings against Poland and Hungary over controversial judicial reforms. Her comments are likely to stir debate about what direction she plans to take EU executive.

Von der Leyen also suggested she would strive for a more accommodating line with Italy over its high budget deficit.

Although she said there were good reasons for the EU's budget rules, "there is also a lot of flexibility" to encourage investment and growth.

Italy must submit its draft budget for 2020 to the European Commission by mid-October. The Commission, which has just waived sanctions on Italy for its deficit, wants Rome to pledge that the budget will not violate EU fiscal rules.

Up to the last minute it was unclear if Ursula von der Leyen would be accepted as the next European Commission president. Her stellar speech and a lack of alternatives won MEPs over, says DW Editor-in-Chief Ines Pohl.  (16.07.2019)

German Defense Minister Ursula von der Leyen had faced an uphill battle as a compromise candidate. She won by a slim majority, with 383 out of 747 votes. (16.07.2019)