US Vice President Mike Pence has criticized Germany for allowing Washington to bear the "burden of defending Europe." Pence has also suggested deploying an additional 1,000 US troops in Poland. 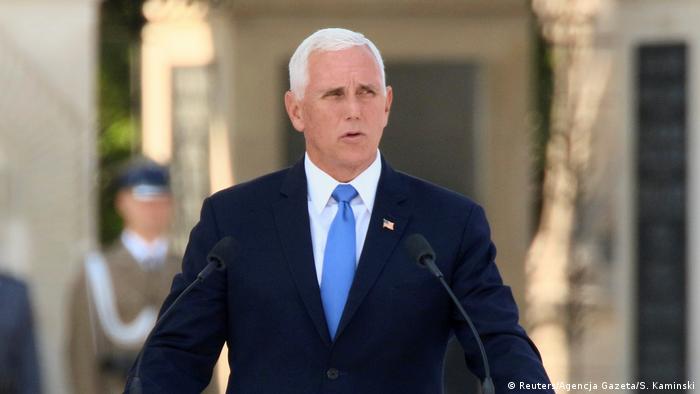 Pence is representing US President Donald Trump who had canceled his Warsaw trip at short notice, saying he needed to monitor hurricane Dorian.

At the meeting, Pence sharply criticized Germany for not meeting its NATO defense spending target and instead embracing the Nord Stream natural gas pipelines from Russia.

"It simply makes no sense for people of the United States to bear the lion's share of the burden of defending Europe...to see Germany become dependent on Russia for their energy needs is another point that President Trump will continue to raise."

Pence called for more vigilance towards Russia, but also commended Duda for complying with the NATO defense spending target of 2% of GDP.

US Militarization in Poland

Pence and Duda also discussed the reinforcement of US troops in Poland from about 4,500 to 5,500 soldiers.

Trump had threatened to withdraw soldiers from Germany in February for "not spending enough" on defense.

Trump again spoke of the withdrawal during Duda's visit to Washington in June, and mentioned relocating US troops from Germany to Poland.

Pence confirmed at the meeting that boosting the US military presence in Poland "is in the process as we speak and it reflects a part of the US' ongoing commitment to this alliance."

The vice president also encouraged Poland to take "even greater" steps to advance its judicial independence. The leaders discussed financial support to Ukraine, also likely to feature at an upcoming US bilateral meeting with Ukrainian President Volodymyr Zelenskiy.

At the meeting, Pence also said that Poland could soon join the 38 countries in the US Visa Waiver Program, which allows most citizens to travel to the US for up to three months without a visa.

Pence, who has been lobbying allies to ban Huawei, said that the agreement would "set a vital example for the rest of Europe."

President Duda also said at the meeting that Poland's counter-intelligence services had detected possible Chinese espionage activities in the country.

"Polish security services have conducted and are conducting activities in this regard and they detected actions which may be qualified as actions of an espionage character," Duda said.

Prosecutors were in the process of analyzing data, Duda added, and if they decide to prosecute, Polish courts would then decide on the matter.

Pence's European tour is still scheduled to include stops in Iceland on Wednesday, the UK on Thursday, and the Republic of Ireland at the end of the week.

A number of world leaders, including German President Frank-Walter Steinmeier and US Vice President Mike Pence, are in Poland to mark the 80th anniversary of the outbreak of World War II. (01.09.2019)