Leaders from a number of countries are gathering in Poland on Sunday to commemorate the outbreak of World War II on its 80th anniversary. The ceremonies started early in Wielun, the first city to be bombarded by the German Luftwaffe on September 1, 1939, with speeches by Polish President Andrzej Duda and his German counterpart, Frank-Walter Steinmeier.

The presidents, local officials and residents — among them survivors of the bombings — observed a minute of silence in memory of an estimated 2,000 victims.

In his speech, Polish President Duda thanked Steinmeier for his presence at the painful anniversary.

"Eighty years ago, at this very moment, all hell rained down on Wielun — fueled by German racist barbarity and the desire to annihilate," said Steinmeier. The German president also asked for Polish forgiveness. "I bow before the Polish victims of German tyranny, and I ask for your forgiveness."

Minutes later, Polish Prime Minister Mateusz Morawiecki and the deputy head of the European Commission, Frans Timmermans, led observances at Westerplatte Peninsula, on the Baltic coast, the site of the war's first battle as Polish troops put up resistance. 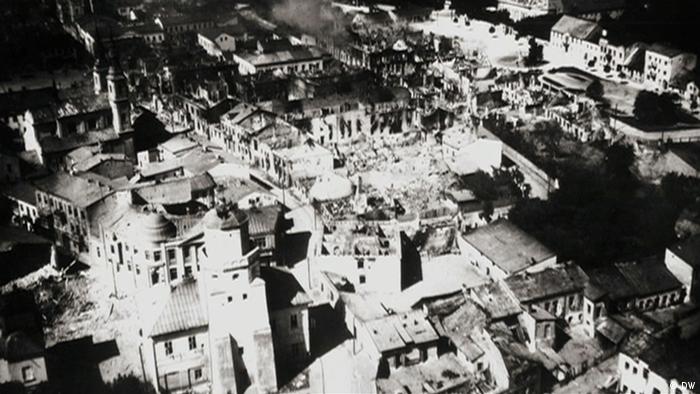 The destruction in Wielun after the German invasion

The main event in Warsaw will have a long list of participants, including German Chancellor Angela Merkel, French Prime Minister Edouard Philippe, Belgian Prime Minister and President-elect of the European Council Charles Michel as well as leaders from Croatia, the Czech Republic, Lithuania, Slovakia, Ukraine and Hungary.

US President Donald Trump was supposed to attend, but he canceled his planned trip, saying that he needed to deal with a hurricane approaching the southeastern United States. Vice President Mike Pence is participating in the event in Trump's place.

Few places suffered the level of death and destruction seen in Poland during World War II. It lost about a fifth of its population, including the vast majority of its 3 million Jewish citizens. The country remained under German occupation for more than five years.

After the war, Poland had to rise again from ruins and it remained under Soviet domination until 1989.

For Poland's ruling Law and Justice (PiS) party, the memory of World War II is a central plank of its "historical politics," aiming to counteract what it says is a lack of appreciation in the West of the extent of the nation's suffering and bravery under Nazi German occupation.

Critics say the party's ambition is to fan nationalism among voters at a time when populists around the world are tapping into historical revisionism. PiS says the country's standing on the global stage and national security are at stake.

In a move likely to increase tensions between Poland and Germany, fueled under the PiS government, Polish PM Morawiecki renewed calls for wartime reparations in recent days.

Germany, one of Poland's biggest trade partners and a fellow member of the European Union and NATO, has repeated that all financial claims linked to World War II have been settled.

This weekend, Poland commemorates the start of World War II in September 1939. For Germans, in particular, there is an increasing obligation to take a stand against the opponents of democracy, writes Jens Thurau. (01.09.2019)

German President Frank-Walter Steinmeier has cautioned about the re-emergence of nationalism across Europe. He spoke during a moving ceremony for the victims of the August 1944 SS massacres in central Italy. (25.08.2019)

Thousands of Europeans sought sanctuary in Africa during World War II — among them were many Polish people. A Canadian filmmaker explores the journey of his Polish forefathers in a documentary. (03.06.2019)