The leaders of Poland and Germany have joined around 30 international guests in Warsaw to mark the 80th anniversary of the start of World War II. In his address, the German president asked for Poland's forgiveness.

German President Frank-Walter Steinmeier marked the 80th anniversary of Nazi Germany's invasion of Poland in Warsaw on Sunday by asking for forgiveness for "Germany's historical guilt."

"My country unleashed a horrific war that would cost more than 50 million people — among them millions of Polish citizens — their lives. This war was a German crime," the president said in a speech before Polish President Andrzej Duda, US Vice President Mike Pence, German Chancellor Angela Merkel, French Prime Minister Edouard Philippe, as well as representatives of 30 other countries.

In his speech, Duda remembered not only the German invasion, but also the Soviet massacre of Polish officers at Katyn in 1940, as well as the mass murders at Auschwitz and other death camps built by the Nazis in occupied Poland. "One can say that the Germans humiliated Poles, because they left that machinery of annihilation on Polish soil," Duda said.

He also reminded those present that genocide and mass murder continued around the world today, and underlined the importance of international alliances like NATO and the European Union.

Both Duda's and Steinmeier's speeches were not without political significance: Duda mentioned Russia's alleged aggression in Georgia and Ukraine in the last few years (no representative of Russia was invited to the event in Warsaw), while Steinmeier appeared to acknowledge pressure from the US about Germany's contribution to NATO.

"We must contribute more to European security. We must do more for Europe's prosperity. We must listen more for the sake of European cohesion," he said. 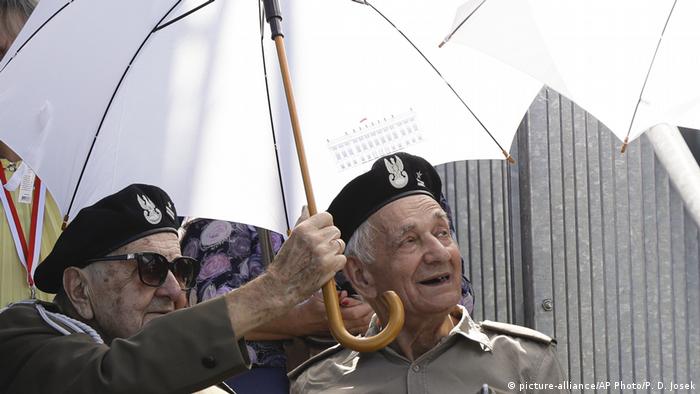 The speeches by Steinmeier, Duda and Pence were followed by the ringing of a bell of peace by all the international leaders present, and a wreath-laying at the Tomb of the Unknown Soldier, a central memorial in the Polish capital that is guarded round the clock by Polish soldiers. Some 6 million Poles are estimated to have been killed during World War II, with several Polish cities almost totally destroyed.

In his speech, Pence paid tribute to the "courage and strength deep in the Polish character that no one could destroy." He added that "Poland proved itself a homeland of heroes."

"Today we remember the long roll call of Polish heroes who fought for freedom," Pence said, before also remembering his own countrymen, as well as British soldiers who were killed and the resistance movements in France, Denmark, the Netherlands, Romania and elsewhere in occupied Europe.

Though US President Donald Trump was initially due to attend the ceremony, he canceled at short notice, citing the threat of Hurricane Dorian to the coast of Florida.

Read more: Opinion: 80 years after WWII, we must fight for an open Europe

The commemoration in Warsaw was the third of the day in Poland, after Steinmeier and Duda gave speeches at a ceremony in the morning in Wielun, western Poland, the first town bombarded by Adolf Hitler's forces on September 1, 1939.

In his speech in Wielun, Duda thanked Steinmeier for his presence at the painful anniversary. Minutes later, Polish Prime Minister Mateusz Morawiecki and the deputy head of the European Commission, Frans Timmermans, led observances at Westerplatte Peninsula, on the Baltic coast, the site of the war's first battle as Polish troops put up resistance. 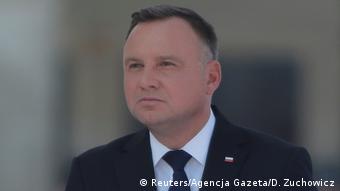 Morawiecki used his speech to renew calls for compensation from Germany for the atrocities committed during the war. The German government regards this question as having been settled by international agreements made during reunification negotiations in 1990.

For Poland's ruling Law and Justice (PiS) party, the memory of World War II is a central plank of its "historical politics," aiming to counteract what it says is a lack of appreciation in the West of the extent of the nation's suffering and bravery under Nazi German occupation.

Critics say the party's ambition is to fan nationalism among voters at a time when populists around the world are tapping into historical revisionism. PiS says the country's standing on the global stage and national security are at stake.