Lehman Brothers: Looking back at the basics | Business | Economy and finance news from a German perspective | DW | 12.09.2018

Lehman Brothers: Looking back at the basics

The demise of Lehman Brothers shook the finance world and had enormous knock-on effects globally. Even those who had never heard of the investment bank were impacted. Ten years on, we answer some fundamental questions. 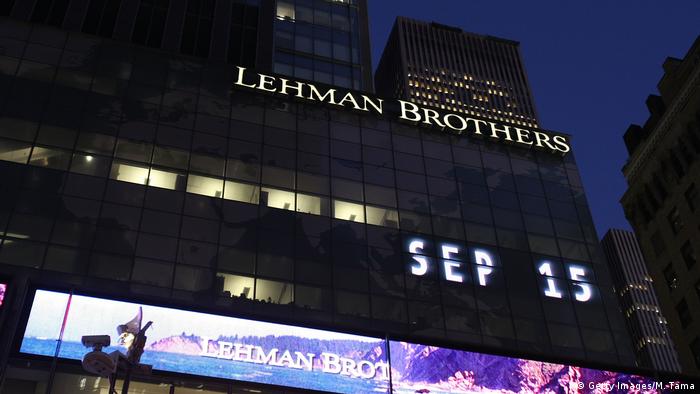 The collapse of the US investment bank, Lehman Brothers, 10 years ago was a shock that still reverberates today. It was itself an escalation of the financial crisis that started a year earlier and its massive repercussions cannot be downplayed. "The crisis shook the foundations of the Western financial system," says Axel Weber, the former president of Germany's central bank, the Bundesbank, and current chairman of Swiss banking giant UBS.

What led to the bankruptcy?

Like many other banks, Lehman Brothers was hit by the real estate crisis that had been going on for well over a year. On September 10, 2008, Lehman CEO Richard Fuld announced a loss of $3.9 billion (€3.3 billion) for the third quarter. This increased worries about insolvency; soon all trust was gone.

Read more: Central banks and the question of independence

Despite hectic negotiations a buyer for the bank could not be found and the only way out was declaring bankruptcy. On September 15, 2008, the bank filed the necessary paperwork.

Was the bankruptcy really a surprise?

Just a short time before the crash of Lehman Brothers, the then head of Deutsche Bank, Josef Ackermann, could not imagine such a thing happening. But politicians and the financial community were aware of their responsibility. At the time he said, "The collapse of a bank of this magnitude would lead to another wave of upheaval and thus to further losses and write-downs in probably all banks."

But the political pressure was great and after saving three banks there was little appetite for another billion-euro rescue package. Looking back though, Hans-Walter Peters, president of the Federal Association of German Banks, said that was a mistake. "The bankruptcy of the bank triggered first a financial and confidence crisis and then a severe recession."

Moving on? 10 years after Lehman Brothers

What were the direct consequences?

A crash of the financial markets. Because the banks could no longer rely on being saved by governments they were no longer willing to lend each other money in the short term as is customary in normal times. Many worried that the markets could dry up, so central banks pumped a lot of money into the markets worldwide. In the first few months of the crisis, the US and the six largest EU countries together provided €800 billion to support the financial sector.

In order to avoid a run on German banks, Germany's Chancellor Angela Merkel and the then-minister of finance, Peer Steinbrück, gave a guarantee that bank deposits were safe. This, however, did not prevent the severe economic collapse that followed. Millions of people worldwide lost their jobs; in Germany 1.5 million jobs were saved only by reducing working hours and with it pay packages.

How were investors affected?

Around 50,000 investors had bought certificates from a Dutch subsidiary of Lehman Brothers. This money was lost even though the securities had been sold as safe investments. But they were not the only victims of the bankruptcy. Consumers and savers are still paying the bill. Today, bank deposits hardly earn any interest, so savers need to save even more so that they can be financially secure in their retirement.

"These are repercussions that step over into the area of social policy," says Michael Heise, chief economist at insurance and asset management giant Allianz. And that has serious consequences, but not only materially. Recently, this dissatisfaction has increased and manifested itself in the rising electoral success of populist parties throughout Europe.

Are the banks safer now?

In short, partially. The US government recapitalized its banks during the crisis and today they are once again in great shape, says Christoph Schalast, a professor at the Frankfurt School of Finance and Management. In Europe, however, the taxpayer should no longer be held hostage by banks in the event of a systemic crisis: "There were different strategies that led — especially in Germany — to a downsizing of the banks," said Schalast.

At least Europe has created a single banking authority, though many banks say it regulates too much. "Many leading bank managers now act more like administrative managers, not entrepreneurs," says Professor Dirk Schiereck, a banking expert at the University of Darmstadt.

Too little has happened, warns the economist Martin Hellwig. In order to stabilize the financial sector in the long-term, banks should be required to have a higher equity ratio. Occupy, a group of globalization critics, agrees and will protest again this Saturday the 10-year anniversary of Lehman's collapse.

Did bankers really learn anything?

Many of those responsible at the time have moved on to other lucrative jobs. The then boss of Lehman, Richard Fuld, now works for the financial advisory firm Matrix Private Capital. Many others have also had soft landings. This Saturday they are reportedly meeting in London, not to 'celebrate' the bankruptcy of course, but to "cultivate the network," as one of them said recently.

Are we safe from another crisis?

Today there are many risks like high real estate prices, increased sovereign debt — for example in Italy — and the currency crises in Turkey and throughout emerging markets. Hedge fund manager Steve Eisman, who was one of the first to bet on the demise of Lehman Brothers and made $1 billion in the process, sees substantial risks in cryptocurrencies, American car loans and in Tesla.

Last but not least, the current monetary policy is a risk, warns UBS Chairman Axel Weber: "Central banks would do some good if they slowly turned the system back towards normalcy. I see this happening very slowly and that in itself can be another risk to stability."

A decade ago, the subprime crisis began in the US, which a year later became a global financial crisis with the failure of Lehman Brothers. DW explores what politicians and the financial world have learned. (04.07.2017)

Ten years after the bankruptcy, the documentary The Crash – The Investment Bank Lehman Brothers charts the risky rise and ruinous fall of a global financial services giant. (24.07.2018)