Donald Trump impeachment inquiry has Ukraine, Zelenskiy in a bind | Europe | News and current affairs from around the continent | DW | 20.11.2019

Donald Trump impeachment inquiry has Ukraine, Zelenskiy in a bind

The public impeachment inquiry into US President Donald Trump has moved Ukraine into the global spotlight. Officials in Kyiv are worried about the negative fallout, which has already begun. 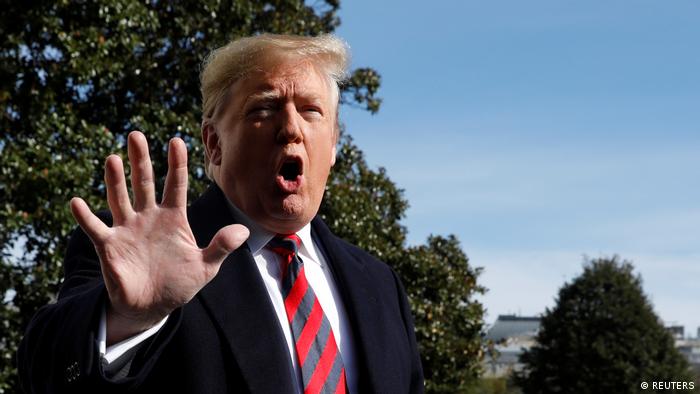 Volodymyr Zelenskiy was already well known in Ukraine as an actor, director and screenwriter before he was elected president in April. He had aspired to be world-famous, he told an interviewer in October. His dream has come true — though not in the way he had imagined. "I didn't want this," the 41-year-old said about his latest role: at the center of the impeachment inquiry into his US counterpart, Donald Trump.

Following a whistleblower's report of possible misconduct by Trump in a telephone call with Zelenskiy in July, the Ukrainian president and his country are the central focus of US politics and the international media — and the intensity is increasing. Congressional Democrats are investigating whether Trump abused his office by requesting that Ukraine investigate former US Vice President Joe Biden, who has declared his intent to challenge the incumbent in the 2020 election. According to the testimony of various US officials so far, Trump had asked Zelenskiy to publicly announce whether Biden's son Hunter had engaged in misconduct while sitting on the board of the Ukrainian petrol company Burisma. Before that phone call, Trump had ordered the State and Defense departments to withhold a total of $391.5 million (€350 million) in aid payments to Ukraine. Trump and Zelenskiy have denied a connection between the money and the US president's request.

Should the impeachment process move beyond the inquiry stage, Ukrainian officials would most likely be invited to give evidence against the US president in Washington. That would be unprecedented.

When Russia annexed the Crimean Peninsula in 2014, Ukrainian officials worked to receive headlines and attention in the United States. Today, it is the opposite. In public, Zelenskiy rarely utters a word about developments in Washington. On Tuesday, he told CNN that people were "tired" of the hearing about the work of Biden's son with Burisma, a privately owned Ukrainian gas company. The country, he said, has problems of its own.

Ukraine will need help from the United States no matter what happens in the impeachment hearings or the 2020 election. "Should he admit to pressure from Washington, Zelenskiy would lose the goodwill of the current US president," said Serhij Rudenko, a DW columnist based in Kyiv. "If he denies it, he could slam the door to the White House in case Joe Biden, for example, moves in."

Without the US's support, Ukraine would effectively be alone against Russia. "Kyiv's strategy is to avoid taking sides," Volodymyr Yermolenko, of the Internews Ukraine media organization, told DW.

That doesn't mean that Ukraine's government has remained entirely neutral. Zelenskiy has said that if Washington could provide evidence, his government would consider investigating whether Ukrainians had meddled in the 2016 US presidential election in an effort to tip the vote to Trump's opponent, former Secretary of State Hillary Clinton.

Ukrainians are beginning to notice the negative consequences of the attention. "The worst thing that can happen is that we become a bargaining chip," Foreign Minister Vadym Prystaiko told the BBC's Ukrainian service in November. "Unfortunately, we are that coin now," he said.

Prystaiko's US counterpart, Secretary of State Mike Pompeo, said Washington had ultimately released the military aid and would continue to support Ukraine. Yet diplomatic ties remain shaky: Neither country has had a regular ambassadors in the other for months. After Democrats announced their intent to depose him in September, Kurt Volker resigned as the US's special representative for Ukraine negotiations, and the position — one that is very important to Zelenskiy's government — is still vacant. The last confirmed ambassador, Marie Yovanovitch, was recalled by Trump in May. William Taylor has held the position in an acting role since June.

Other observers say the entire country has become toxic in the United States. "Ukraine as a whole and all aid programs are being scrupulously monitored," Alyona Getmanchuk, the head of the New Europe Center think tank in Kyiv, wrote in her blog.

It now seems unlikely that the United States would play a role in negotiating with Russia to put an end to its backing of separatists in eastern Ukraine. It is also questionable whether Zelenskiy would accept an invitation to the White House for an official visit while Trump is in the midst of impeachment proceedings, much as it is difficult to imagine that Trump would travel to Kyiv under the circumstances. The presidents' brief meeting on the fringes of the UN General Assembly in September may well have been their last for the foreseeable future.

US diplomat Gordon Sondland has testified that Donald Trump's personal lawyer was pursuing a "quid pro quo" with Ukraine. The envoy to the EU is a crucial witness in the impeachment inquiry into the president. (20.11.2019)