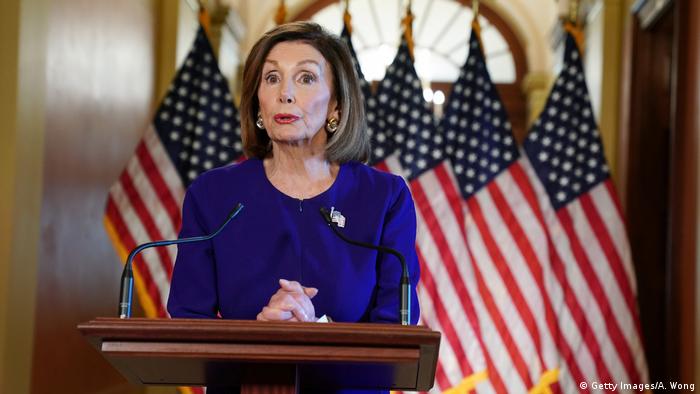 House Speaker Nancy Pelosi announced on Tuesday a formal impeachment inquiry into US President Donald Trump. The move represents the first step in a process that could remove the president from office, and is sure to heighten partisanship ahead of the 2020 election.

"The actions of the Trump presidency revealed the dishonorable facts of the president's betrayal of his oath of office, betrayal of our national security, and betrayal of the integrity of our elections," Pelosi said in a televised address.

"The president must be held accountable, nobody is above the law."

The decision to launch a formal impeachment inquiry was triggered by allegations that Trump sought help from a foreign government in his reelection bid.

At the center of the scandal is a secret intelligence whistleblower complaint about the president's July 25 phone call with Ukrainian President Volodymyr Zelenskiy, in which Trump allegedly pressured his counterpart to dig up dirt on former vice president and possible 2020 Democratic rival Joe Biden and his son, Hunter.

Meanwhile, at the UN General Assembly in New York, Trump tweeted that he would release a full transcript of his call with Zelenskiy.

"I am currently at the United Nations representing our country, but have authorized the release tomorrow of the complete, fully declassified and unredacted transcript of my phone conversation with President Zelenskiy of Ukraine," Trump wrote.

"You will see it was a very friendly and totally appropriate call. No pressure and, unlike Joe Biden and his son, NO quid pro quo! This is nothing more than a continuation of the Greatest and most Destructive Witch Hunt of all time!"

Earlier Tuesday, the Republican-controlled Senate approved a nonbinding resolution calling on the Trump administration to provide the House and Senate intelligence committees with a copy of a whistleblower complaint.

Trump admitted he had temporarily frozen nearly $400 million (€363 million) in US aid to Ukraine a week before the call, but denied he did so to pressure Zelenskiy to initiate an investigation that would damage Biden. Instead, he said the funds were withheld to pressure the Europeans to provide more support to Ukraine's government. The aid money was released last week.

The inquiry sets the stage for a divisive constitutional and political battle head of next year's elections.

Pelosi had waivered on opening a politically explosive impeachment inquiry 14 months before the election in which a number of swing states and districts are up for grabs. She was instead aiming to tip the Senate and White House in 2020 by focusing on core issues voters care about.

But the latest scandal put her under mounting pressure from her Democratic caucus to open an impeachment inquiry.

In recent days, a swell of moderate Democrats joined the liberal wing of the party and several Democratic presidential hopefuls in calling for an inquiry. There are now at least 170 out of 235 Democrats in the House supporting impeachment, according to political analysts.

However, only 37% of the American public thinks Trump should be impeached, according to Reuters/Ipsos opinion poll.

Trump's reelection campaign claims the impeachment proceeding will "only serve to embolden and energize [his] supporters."

The prospect of impeachment has hung over the Trump presidency for months, but the chances of a probe diminished after special counsel Robert Mueller's investigation into Russian meddling in the 2016 election ended without a clear directive for lawmakers. Democrat House committees launched probes into Trump's business dealings and other scandals, but all appeared likely to last for months as the White House withheld information and stymied lawmakers.

The process of impeachment

Under the constitution, the House has the sole power of impeachment, while the Senate has the power to try impeachment. Even if the Democratic-controlled House votes to impeach, the Republican-controlled Senate would have to convict. With Republicans backing their president, a conviction in the Senate appears unlikely.

Only two presidents in US history have been impeached: Andrew Johnson and Bill Clinton. However, neither was forced from office. Richard Nixon resigned to avoid a House impeachment vote.