The US president alluded to a discussion about democratic presidential hopeful Joe Biden and his son in a phone call with Ukraine's Zelenskiy. The statement, albeit vague, has added fuel to calls for impeachment. 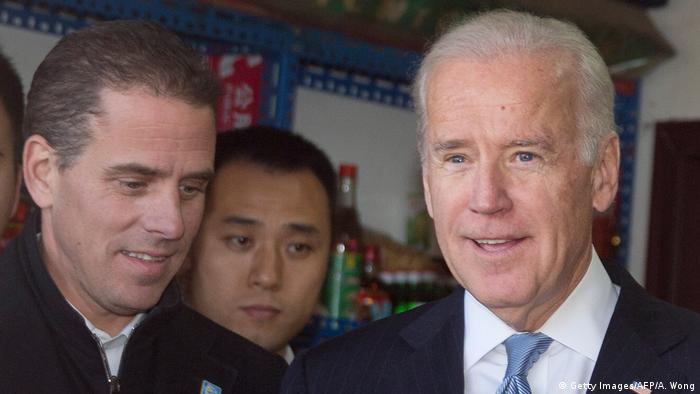 US President Donald Trump says he and Ukrainian President Volodymyr Zelenskiy talked about the fact that "we don't want our people, like Vice President Biden and his son" contributing to corruption in Ukraine in a phone call on July 25.

The incident intensified the debate around the possibility of impeachment charges for the US president.

The Sunday statement stopped short of admitting that the pair discussed investigating the Democratic presidential front-runner and his son, Hunter. The call is the subject of an anonymous whistleblower complaint filed in August and has ignited debate over whether the president abused his power for political gain.

"The conversation I had was largely congratulatory, was largely corruption, all of the corruption taking place," Trump said outside the White House before departing on a trip to Texas and Ohio. "Was largely [about] the fact that we don't want our people, like Vice President Biden and his son, creating to the corruption already in the Ukraine."

Hunter Biden worked for a Ukrainian gas company until 2019. Trump and his allies have seized on the connection to publicly speculate that the presidential candidate and his son engaged in illegal activities.

Corruption is an ongoing concern in the Ukraine. Zelenskiy, who has no political experience, was elected president in April on the platform of ending corruption in the country.

Trump encouraged the Ukrainian president to investigate Hunter Biden's activities in the country, a person familiar with the matter told The Associated Press. The US was sitting on up to $250 million (€226 million) in military aid pegged for Ukraine at the time of the call.

The president says that he did "absolutely nothing wrong" in the July phone call and that he would look into releasing a transcript of the call.

There is no evidence that Biden or his son engaged in illegal activity in the Ukraine. On Saturday the Democratic candidate said "Trump deserves to be investigated" for "trying to intimidate a foreign leader."

Adam Schiff, the Democratic chairman of the House Intelligence Committee, signaled a change of stance on Sunday during CNN's "State of the Union."

"If the president is essentially withholding military aid at the same time that he is trying to browbeat a foreign leader to do something illicit, to provide dirt on his opponent during a presidential campaign, then that may be the only remedy that is co-equal to the evil that conduct represents," Schiff said.

Fellow impeachment holdout and Democratic Speaker of the House, Nancy Pelosi, said Sunday that administration officials "will be entering a grave new chapter of lawlessness which will take us into a whole new stage of investigation" if acting director of national intelligence, Joseph Maguire, fails to provide further information about the whistleblower complaints.

Maguire oversees the US government's intelligence inspector, Michael Atkinson, who has called the complaint "serious" but has failed to turn the complaint over to Congress.