The revelation by The Wall Street Journal was related to a whistleblower complaint about Trump. The US president said it was "dumb" to think he would say something inappropriate in phone calls with foreign leaders. 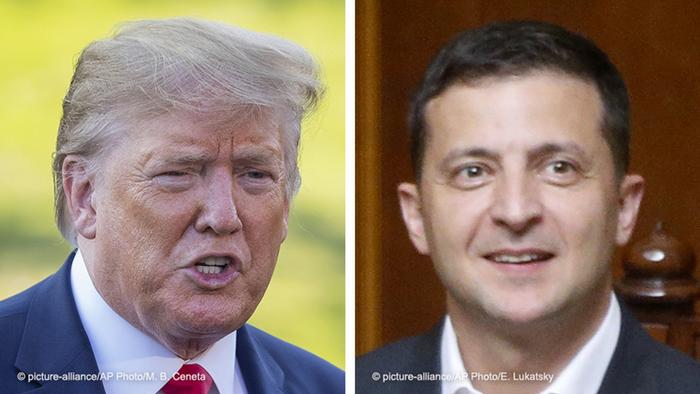 The revelation, which the WSJ based on unnamed sources familiar with the matter, is said to be related to a complaint filed by a whistleblower within the intelligence community.

Biden's son, Hunter Biden, joined the board of Ukrainian gas firm Burisma Holdings in 2014. The company has been accused of corrupt practices, but he has not been personally linked to any wrongdoing.

Joe Biden is the current front-runner in the Democratic presidential primary and is seen by many as a potentially strong challenger to Trump in 2020.

According to the WSJ, Trump allegedly urged Zelenskiy eight times during a phone call in July to work with his personal lawyer Rudy Giuliani on a possible probe of the former vice president's son.

The source told the WSJ that Trump did not make any promise of foreign aid to Zelenskiy in exchange for an investigation into Biden, even though the US was holding up $250 million (€226 million) in military aid for Ukraine at the time.

"Virtually anytime I speak on the phone to a foreign leader, I understand that there may be many people listening from various US agencies, not to mention those from the other country itself," Trump tweeted on Thursday.

"Knowing all of this, is anybody dumb enough to believe that I would say something inappropriate with a foreign leader while on such a potentially 'heavily populated' call," he wrote.

Trump has been under fire over the whistleblower's complaint, which was filed on August 12. It warned the US intelligence community of the president's behavior during a communication with a foreign leader.

The details of the whistleblower's complaint have not been made public. But The Washington Post later reported that the complaint centered on Ukraine.

A source, who requested anonymity, told Reuters news agency that Trump had engaged in not just one phone call, but "multiple acts" that raised flags.

The whistleblower, whose identity has not been disclosed, filed the complaint with the inspector general of the intelligence community, Michael Atkinson, labeling the information as of "urgent concern."

Atkinson deemed it to be "credible" and on August 26, he passed it along to acting Director of National Intelligence Joseph Maguire, a Trump appointee.

Maguire then blocked the complaint from being forwarded to the US Congress, arguing that the whistleblower complaint did not meet the definition of "urgent concern."

Chairman of the House of Representatives Intelligence Committee, Adam Schiff, a Democrat, said that Maguire's actions raised the specter of a cover-up, designed to protect Trump or someone close to him.

Three committees in the Democratic-controlled House have demanded that the Trump administration hand over a transcript of the call.

"If the president is trying to pressure Ukraine into choosing between defending itself from Russian aggression without US assistance or leveraging its judicial system to serve the ends of the Trump campaign, this would represent a staggering abuse of power," Schiff said.

Biden blasted Trump over the WSJ revelations, saying the reports showed the president's "willingness to abuse his power and abase our country."

"It means that he used the power and resources of the United States to pressure a sovereign nation — a partner that is still under direct assault from Russia — pushing Ukraine to subvert the rule of law in the express hope of extracting a political favor," Biden said in a statement.

US Democratic debate rivals slug it out over health care

Democratic Party candidates vying to take on Donald Trump in the 2020 presidential election thrashed out their differences. Front-runner Joe Biden came out fighting amid criticism his policies were too moderate. (13.09.2019)

The Obama-era vice president has rejected claims that he commended pro-segregation lawmakers from the civil rights era. One candidate said it was "hurtful" to hear him talk about racist lawmakers in that way. (28.06.2019)