US Democratic debate rivals slug it out over health care

Democratic Party candidates vying to take on Donald Trump in the 2020 presidential election thrashed out their differences. Front-runner Joe Biden came out fighting amid criticism his policies were too moderate. 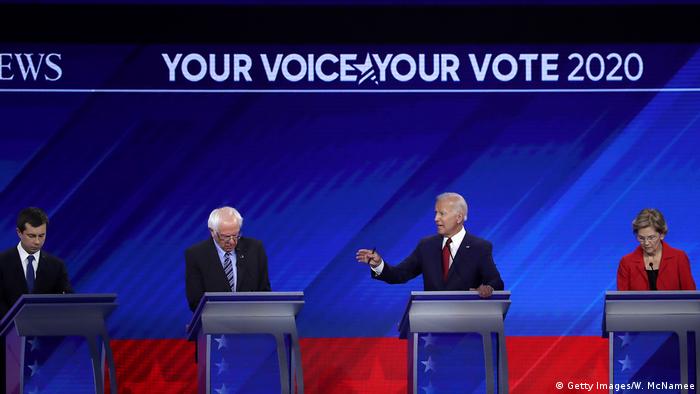 Leading contenders to be the next US Democratic presidential nominee clashed on Thursday, in a debate that saw  former Vice President Joe Biden in a combative mood.

Ten hopefuls took to the stage in Houston, a tightened lineup from previous debates in June and July which featured 20 hopefuls over two nights. However, the three older contenders — who are also the favorites — provided the initial focus with a fierce debate on health care.

The more politically cautious Biden — the early frontrunner in the race — hit out at the two most prominent progressives, Elizabeth Warren and Bernie Sanders over their "Medicare for all” plan to extend government-funded health care to all Americans.

Sanders had claimed that as Obama's vice president Biden bore responsibility for millions of Americans going bankrupt under the Obamacare system.

Biden hit back by dismissing universal health care as a pipe dream with costs that had not been properly estimated. He defended his own plan, which builds on Obamacare.

Sanders, who advocates a shift away from private health insurance to a universal system, assured voters: "We will finally make sure that every American has health care as a human right, not a privilege."

Warren, an ascendant in the race, said a universal health care policy would be funded by those who could most afford it.

With the main three contenders in their seventies, it was up to the younger contenders stand out to stay relevant.

Obama-era Housing Secretary Julian Castro launched his own attacks on Biden, arguing that it was time for new solutions.

"Our problems didn't start with Donald Trump," Castro said in his opening statement. "We won't solve them by embracing old ideas."

However, those hoping to emerge from the pack saved their harshest criticism for Trump.

Several more candidates are set to join a further debate next month, which will be spread over two nights.

US: Republican Mark Sanford joins list of Trump challengers in 2020

Republican former governor Mark Sanford once described Trumpism as "a cancerous growth" and is now seeking to challenge the president's reelection bid. Sanford said the Republican Party had "lost its way." (08.09.2019)

Trump tells Democratic congresswomen of color to leave US

The US president told Democratic congresswomen of color to go back to where they came from. Three of the women he targeted were born and raised in the United States. (15.07.2019)

The Obama-era vice president has rejected claims that he commended pro-segregation lawmakers from the civil rights era. One candidate said it was "hurtful" to hear him talk about racist lawmakers in that way. (28.06.2019)

Brexit: UK to restart trade talks with EU after threatening to quit 45m ago