Ukrainian President Volodymyr Zelenskiy said he was merely speaking his mind when criticizing the leaders of France and Germany. During a call with Donald Trump, he said Merkel and Macron were not doing enough for Kyiv. 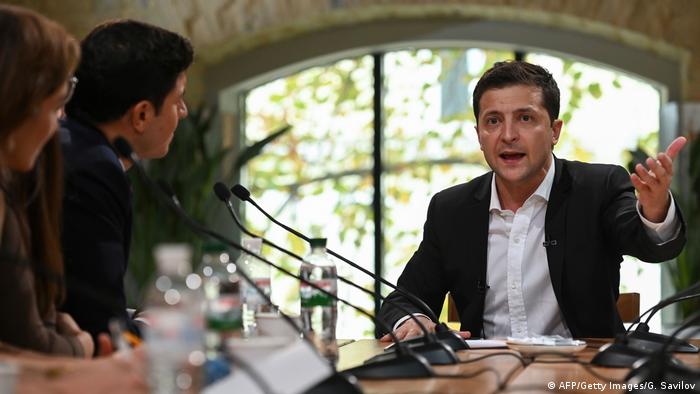 Ukrainian President Volodymyr Zelenskiy boasted of a "very good relationship" with German Chancellor Angela Merkel on Thursday, but refused to walk back the critical remarks he had made in a recently declassified call with US President Donald Trump.

During the July call, Zelenskiy told Trump that Merkel and French President Emmanuel Macron were not enforcing sanctions against Russia. The Ukraine leader also agreed "1,000%" with Trump's assertion that Germany "does almost nothing for you" and that many other European countries behave in the same way.

According to the memo summarizing the call, Zelenskiy told Trump he was "absolutely right" and that the US was "a much bigger partner than the European Union and I'm very grateful to you."

On Thursday, a DW correspondent asked Zelenskiy if he would like to apologize to the leaders of France and Germany.

"I did not mean to insult anyone," Zelenskiy said in response. "I just said what I think. I always do this."

Still at odds with Macron and Merkel

The Ukrainian leader said that Germany's Merkel was aware of the motives behind his criticism, which include Russia's return to the Council of Europe and construction of a pipeline which would connect Russia and Germany, making Ukraine's position as a gas transit country less relevant.

The Ukrainian leader said he could not agree with this viewpoint.

The phone call between Zelenskiy and Trump prompted an impeachment probe against the US president. During the conversation, Trump urged Zelenskiy to investigate Hunter Biden, the son of Joe Biden, who is a potential election rival for Trump in 2020.

"Biden went around bragging that he stopped the prosecution so if you can look into it … It sounds horrible to me," Trump said.

No evidence of wrongdoing on the part of Joe or Hunter Biden was ever found.

The publication of the previously classified remarks also dealt a political blow to Zelenskiy and his uncompromising image. His opponents accuse him of fawning and trying to ingratiate himself to Trump. During the call, Zelenskiy drew parallels between Trump's political rise and his own and called Trump a "great teacher," and mentioned that he stayed at the Trump Tower during his last trip to the US.

Zelenskiy also used a phrase often repeated by Trump, saying that he wanted to "drain the swamp" in Kyiv.