Phase one agreement aside, could the trade war future mean choosing China or the US? | Business | Economy and finance news from a German perspective | DW | 15.01.2020

Phase one agreement aside, could the trade war future mean choosing China or the US? 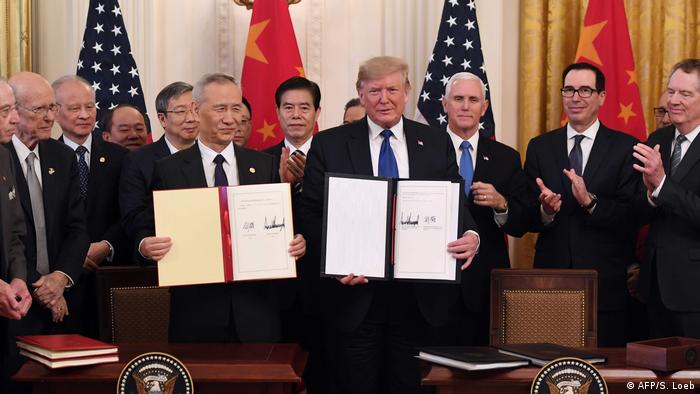 So, the US and China are signing a "phase one" trade deal at the White House on Wednesday.

The limited agreement sees a pause in the trade war between the countries, with some levies being called off and China agreeing to increase some US imports, particularly in agriculture.

But does this really represent a significant breakthrough? "Not a chance," says Steve Tsang, director of the SOAS China Institute at the University of London.

He says the Chinese economy is going through a fundamental restructuring which means the current tensions with the US, both economic and otherwise, will endure beyond the presidency of Donald Trump.

In his view, Xi Jinping's leadership has brought about major changes to China's relationship with the US and the Western world. "This is a leader who fundamentally changes the way the Chinese view the rest of the world," he told DW.

"He wants the Chinese economy to be no longer dependent on the West. That is what Made in China 2025 is all about. So whether you have Donald Trump or not, we would see China moving in the direction the government deems it is able to, in order to reduce Chinese dependence and economic dependence on the rest of the world."

Under Xi Jinping, China has increasingly looked to challenge American dominance across a range of areas. Economically, the Made in China 2025 strategic plan and the Belt and Road Initiative, a development strategy involving infrastructure development and investments in 152 countries, are the signature moves.

American and Western governments have long taken issue with several Chinese economic policies, not least its once gigantic trade surplus and heavily protected economy. But its muscling in on America's lead global role has taken things to a new level, as seen in both the row over Huawei and through the trade spat.

That trade war, prosecuted zealously by Donald Trump, undeniably has his stamp but few expect that conflict to depart with him, or indeed, to depart on the back of any phase one agreements.

"It is a bipartisan shift in how the US views its relationship with China, it is going to survive Donald Trump," says Tsang. "The specifics of the trade war [are] a very Trumpian thing but the structural shift is not."

That raises the question as to what will happen in the mid-term future if the China-US trade conflict escalates to the extent that the two countries start to expect countries to prioritize trade with one or the other, in order to keep doing business with their chosen superpower.

Given the extent to which the US and China dominate global trade patterns, and feature prominently in the export and import lists of practically every economy around the world, that seems difficult to picture.

Yet it does not require an especially vivid imagination to foresee the US-China relationship deteriorating to the extent that countries must "choose" the trade partner they value most.

Tsang envisages a Chinese "decoupling" from both the US and other Western economies in the coming years. "It is a decoupling primarily from the United States and from whoever decides to stay with the US rather than China. If you choose to side with China, then you won't get decoupled," he says.

Although he emphasizes that is dependent on the Chinese economy holding up in the face of the Communist Party's current policies and on Xi Jinping staying in power. Those are two things he has doubts over, as he says the party has begun to repeatedly make "mistakes" and many are beginning to question Xi Jinping in private.

"If the Chinese economy seriously bombs, then Xi Jinping's domination of Chinese politics could be challenged. Unless that happens, it will not be challenged. We don't know," he said.

China or the US?

A huge amount of countries around the world count China as their biggest source of imports, with the US not that far behind (see graphic above top).

Taking the entire European Union as one entity (as it is for trade), then the Chinese trade influence extends from all across Asia, into Africa, across Europe and into parts of South America. There's also the fact that the US itself imports more from China than anywhere else.

American exports dominate in North, Central and some of South America.

In terms of countries that count either America or the China as the biggest markets for their own exports (see second graphic), the picture is a little different. The EU counts the US as its largest export market, as does China itself, Canada, Mexico and several other large countries.

China is the main export market for several Asian countries, as well as some big hitters in Africa, the Middle East and South America, such as Brazil.

Something for the future

Perhaps most significant are those countries that count China or the US as both their largest import AND export market (see graphic below).

Those most intwined with Chinese trade are all within Asia and Australasia, with the exception of Peru and Chile. Chinese trade is especially critical to the books of Australia, Hong Kong, Indonesia, Mongolia, Myanmar, New Zealand, North Korea, South Korea, Japan, Thailand, Malaysia and Philippines. And this kind of deep level of trade with China has risen noticeably around the world in recent years.

On the US side, the influence is noticeably geographic. Barbados, Canada, Colombia, Costa Rica, the Dominican Republic, Ecuador, El Salvador, Guatemala, Haiti, Honduras, Jamaica, Mexico, Nicaragua, Saint Kitts and Nevis, Trinidad and Tobago and Venezuela are those that count the US as their largest import and export partner.

It's important to point out that many countries in both lists do extensive trade with both the US and China, for example Japan, South Korea and Australia. Most EU nations do too. The prospect of ending trade with either the US or China would be economically disastrous, politically explosive and incredibly complicated. It is not something they could imagine to contemplate anytime soon.

But it is not beyond the bounds of possibility that it is something both America and China may be contemplating in the years ahead, despite the soothing sounds coming from the White House this week.