China growing at slowest pace in decades not a sign of weakness | Business | Economy and finance news from a German perspective | DW | 15.07.2019

China's economic growth slowed to 6.2% in the second quarter — the weakest pace since 1992. But the numbers may not be as gloomy for the world's second-largest economy as they appear, says Wang Tao from Swiss bank UBS. 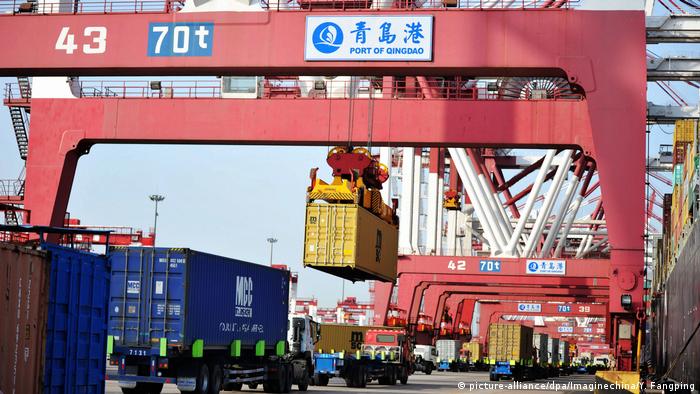 The Chinese economy grew at its slowest pace in at least 27 years in the second quarter, mainly hurt by the ongoing trade dispute with the United States.

The economy grew 6.2% over a year ago, down from the previous quarter's 6.4%, government data showed Monday. The slump came even as June factory output and retail sales pointed toward a recovery.

There are expectations that Beijing may be forced to inject more capital into the economy, even if it means adding to its already ballooning debt. Many economists argue that the stimulus measures, including tax breaks for businesses, announced in March were falling short.

DW spoke to Wang Tao, the chief China economist at UBS, a Swiss investment bank, to help interpret the latest set of data.

DW: China's growth rate in the second quarter was the slowest in decades. Why do you think China is struggling to stimulate its economy?

Wang Tao: China's growth has slowed from the first quarter to 6.2% in the second quarter. I would actually say that this is A) in line with expectation and B) that is still very good growth considering the external shock and domestic weakness.

I wouldn't put it in a general 'this is the slowest in decades,' because compared to 30 years ago or 25 years ago when China had slower growth, the size of the economy of course was much smaller and the stage of development was also very different.

For a $13-trillion economy growing at 6.2%, China is still contributing a third to global growth. So I wouldn't paint this as a very weak story somehow.

Is it just trade tensions with the US or is there more to it?

Well, compared to last year, I think it's the trade tension and therefore weaker exports. But also the trade war-related uncertainty hurts business investment and business sentiment. And on top of that domestic automobile sales have been very weak in the past 12 months or so. I think it's the slowdown in property, the slowdown in auto financing and also the end of the previous policies. All of these are factors as well. So there are domestic reasons as well. But the trade war and related uncertainty is certainly the biggest factor.

Many say that the stimulus measures that China announced in March, including tax cuts, are falling short. How do you see that?

I think if the objective of the stimulus is to stabilize the economy, it's doing fine. Growth is stabilizing. This year's growth target is 6-6.5%. So far the first half is 6.3%. We expect growth to slow further in the second half and stabilize at 6.2%.

And another point, especially from maybe Germany or Europe's point of view, this Chinese stimulus may not have as big a spillover effect on the rest of the world because the tax cuts have been more focused on supporting domestic demand and this stimulus is not accompanied by a big property boost as in the past.

Do you think there is a scope for more stimulus? What are the measures that China can adopt?

There is scope for more stimulus. China still has space for more fiscal easing and more monetary easing. But I think at this moment in our baseline, which we assume that trade war will not escalate further, we don't really expect the government to adopt major new stimulus. We think they will fine tune the current policies to keep growth stable for this year. And growth stabilizing above 6% is enough. They don't need to do more. I mean they can do more, but there are negative consequences. For example, that will push up debt levels even higher. That is not so desirable.

Is this something that is holding back China, the fact that more stimulus could push up debt levels?

In terms of China's potential growth, long-term growth is coming down because China has become more developed than 25 years ago. And the population is aging. So long-term potential growth is about 6% at the moment and it's going down to 5% over the next few years.

If they do that, that means they are going to put policy support into areas that may not be so productive and that pushes up debt levels and makes things unsustainable. That jeopardizes financial sector stability and so that is not desirable.

What's your expectation from the Chinese economy in the second half of the year?

In the second half, we expect stabilization at 6.1%, a bit further slowdown compared to now because the higher tariffs that were put on since May should still have more negative effect coming through. The government will continue to ease marginally further but that's going to be offset by additional downward pressure from the external side and it will affect business sentiment, investments and consumers as well. If you put all this together, we still expect growth to be at 6.1% in the second half and for growth overall for this year at 6.2%.

What are the positive signals coming out of China?

From today's data, you can see that quite a few data points have surprised on the upside — the industrial production, retail sales, auto sales and property investment. Not to say, that they are necessarily sustainable. One thing that I think is positive is that the Chinese consumers remain resilient especially outside of the automobile sector. And the labor market has been resilient despite the external shock. The unemployment rate has gone up a little bit but not as much as feared earlier. That helps to explain the resilience in consumer spending.

The second area that's positive is not necessarily reflected in growth numbers, but the fact that despite the external shock and the trade war negotiations, the authorities have chosen to continue to open up domestic markets further, cutting tax and fees for corporations and making it easier for the private sector to borrow funds. I think all of these measures should help sustain growth in the longer term.

What does this latest set of data mean for China in the ongoing trade negotiations with the US? Do you think China's position has been weakened or strengthened?

I don't think one can just look at one month of data to say that has an important bearing on the trade negotiations. I doubt that's how things really work. In general, I think China has faced negative shocks from the US-China trade dispute. Because China exports more to US than the other way around and because it depends more on exports in general, the negative impact on China will be bigger than on the US. That's just the reality. So China needs to stimulate and support its domestic economy to keep growth stable, which it has done. I don't think that today's data has changed that.