China's second-quarter growth has slowed to 6.2%, its weakest rate in almost three decades. The figure reflects trade pressure from the US and weakening global demand. 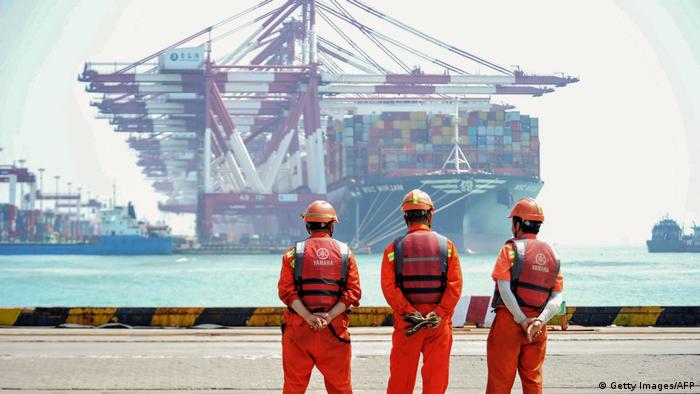 The Chinese economy has suffered a loss of momentum in the second quarter, with the GDP falling to 6.2 % from a 6.4 % expansion in the first three months of the year, figures released by the National Bureau of Statistics showed on Monday.

The growth rate, the slowest since at least 1992, reflects growing pressure on the world's second-largest economy as a Sino-US trade war drags on and demand for Chinese goods slackens in the rest of the world.

"Economic conditions are still severe both at home and abroad, global economic growth is slowing down and the external instabilities and uncertainties are increasing," said NBS spokesman Mao Shengyong.

Government measures taken to boost growth, such as massive tax cuts worth nearly 2 trillion yuan ($291 billion; €258 billion), have so far failed to offset the slowdown. On Monday, the central bank also finalized a previously announced cut to the reserve requirement ratios (RRR) for small and medium-sized banks.

The slump came despite some bright spots in the economy in June, such as a rise in industrial output of  6.3 % from a year before, and retail sales jumping 9.8 % to the fastest rate since March 2018.

The trade conflict between China and the US, which is using tariffs to try and force Beijing to open up its economy, has fueled worries of a global recession. The two economic giants together have now imposed punitive tariffs covering $360 billion in two-way trade.

High-level trade talks that resumed this month has so far not succeeded in bridging the differences between the two sides.

tj/rc (Reuters, AFP)Each evening at 1830 UTC, DW's editors send out a selection of the day's hard news and quality feature journalism. You can sign up to receive it directly here.