The president pointed to the "bigger picture," including Nazi Germany's invasion of the Soviet Union, when asked about the Nord Stream 2 pipeline. This did not go down well with Ukraine. 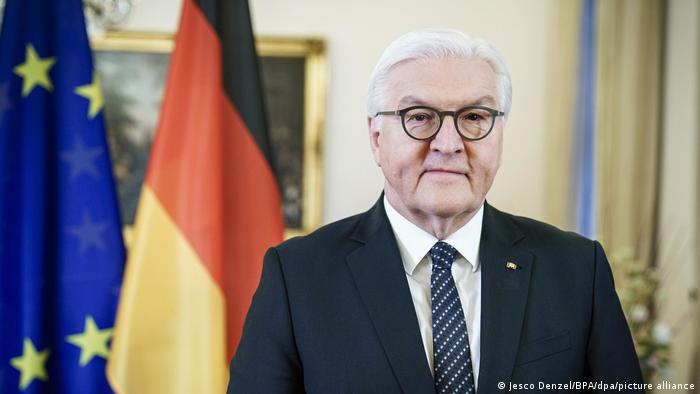 The German president said burning bridges does not show strength

Andriy Melnyk's reaction came as officials from Ukraine and many other European countries have grown increasingly frustrated with the German government's insistence on completing the project and effectively doubling the amount of gas that Germany imports from Russia.

In an interview with the German newspaper Rheinische Post, Steinmeier defended the pipeline by saying that fuel sales were "one of the last bridges between Russia and Europe."

"I believe that burning bridges is not a sign of strength," Steinmeier said.

"For us Germans, there is another dimension," the president said, noting that June will mark 80 years since the Nazis invaded the Soviet Union. He said 20 million Soviet citizens were killed in World War II.

"There have been phases of fruitful partnership, but even more times of terrible bloodshed," Steinmeier said.

"This does not justify any wrongdoing in Russian politics today, but we must not lose sight of the bigger picture," he added. "Yes, we live in the presence of a difficult relationship, but there is a past before and a future after."

Melnyk said Steinmeier's stance was met by "surprise and indignation" in Kyiv. The comments "struck deep" into the hearts of Ukrainians, the ambassador said, according to Germany's DPA news agency.

Steinmeier's comments ignored Ukrainian victims of Nazi Germany, Melnyk said. Ukraine was a part of the Soviet Union during the war, and millions of Ukrainians also lost their lives. Kyiv is currently engaged in a prolonged conflict with Moscow, and the completion of the pipeline could  deprive Ukraine of valuable gas transit fees.

On Tuesday, Steinmeier's office dismissed Melnyk's complaints by saying it was met with "complete incomprehension."

"The text of the interview speaks for itself," they said.

When asked about what the Biden administration has contacted him about the pipeline, which the previous Trump administration sanctioned, Steinmeier said dialogue "on this issue has not even begun."

Germany has come under pressure for continuing to work on construction of the Nord Stream 2 gas pipeline from Russia to Germany via the Baltic Sea. France told Germany last week that it should halt production due to Russia arresting and sentencing opposition leader Alexei Navalny to more than 2.5 years in prison. Germany has demanded that Navalny be released.

Construction on the pipeline resumed earlier this month. Just 150 kilometers (93 miles) of pipeline from the more than 2,300 long pipeline remained to be built as construction resumed.

During the Soviet occupation of eastern Germany, Nazi war criminals were held in "special camps." But many innocent people were also imprisoned, often on flimsy charges, and many of them perished.

The Russian-led pipeline in the Baltic Sea has almost been completed, despite US sanctions and opposition from some EU member states. The controversial project will double the amount of natural gas exported to Germany.

Germany has called for the release of opposition leader Alexei Navalny, after Russian prosecutors agreed with prison officials that the Kremlin critic breached the terms of a 2014 suspended sentence.