The measures are included in the final draft of the 2021 defense policy bill. Work on the €9.5 billion pipeline, which has been halted for a year because of the threat of sanctions, is scheduled to restart soon. 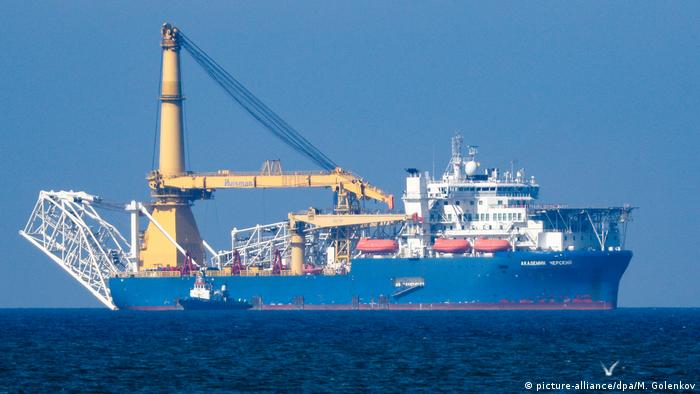 US lawmakers have agreed to extend sanctions on companies involved in the Nord Stream 2 gas pipeline, just as the Russian-led company behind the project vowed to restart construction anytime soon — about a year after work was halted.

Under the draft of the annual US defense policy legislation for 2021, agreed to by US lawmakers on Thursday, more firms involved in the €9.5 billion ($11.6 billion) pipeline to deliver gas from Russia's Siberia region to Germany could be hit with penalties.

Companies that facilitate the construction of the pipeline, including ships that help operations to lay pipelines or move rock formations on the seabed, would face sanctions, along with those that provide insurance, reinsurance, testing, inspection and certification services.

More than 120 companies from 12 European countries could be affected, according to reports.

The defense bill still has to be passed by Congress.

There would be no sanctions against the governments of EU states, including Germany, or the European Union itself in relation to the pipeline, and the draft bill calls for US officials to consult with their counterparts in the bloc before levying penalties.

The US first passed legislation over Nord Stream 2 last December, levying sanctions if companies did not comply with a 30-day order to withdraw from the project. Outgoing US President Donald Trump complained the pipeline would leave Europe too economically and politically reliant on Russia.

"Whether it comes through a pipeline through the Baltic Sea or across a pipeline across Belarus and Poland or Ukraine, it's still the same molecules that we are buying. I mean, we get the gas molecules, Russia gets the euros."

There are hopes in Germany now that President-elect Joe Biden would take a more pragmatic approach than Trump.

The first sanctions bill prompted a halt to the project, specifically construction work on the Danish island of Bornholm, where two Swiss laying vessels ceased their work under pressure from Washington.

Twelve months later, however, the Gazprom-led consortium behind Nord Stream 2 is due to restart construction work on Saturday.

On Tuesday, the maritime authority in the German city of Stralsund informed shippers to beware of pipeline-laying activities from December 5 until the end of the year in the area of the Baltic Sea where the pipeline will make landfall.

A statement said the work would be carried out in the Adlergrund area near the German island of Rügen. It said anchoring or fishing in the area was not permitted and warned of measuring and demarcation buoys.

On Friday, Nord Stream AG didn't explicitly confirm the restart to DW but pointed to the German waterways authority statement from a few days earlier.

The Switzerland-based Zug company said its representatives would not comment on the draft US bill. However, company officials agree with the European Commission and EU governments that consider the sanctions a violation of international law.

Read more: As Russia battles coronavirus, its military pushes ahead with recruitment

The construction of Nord Stream 2 is nearly complete. Just a 120-kilometer (74-mile) stretch of the 1,230-kilometer pipeline needs finishing.

As well as the US, Poland and Ukraine oppose the construction, saying Nord Stream 2 will give Moscow a stranglehold over Germany.

The German government has said the pipeline will create a direct and secure energy supply, with gas demand in the country growing as it cuts dependence on nuclear and coal power.

As the Navalny case respins the geopolitical kaleidoscope, Poland is pushing Germany to scrap Nord Stream 2. DW looks at Berlin's options for the costly, controversial and delayed gas pipeline.

The Biden administration has announced plans to impose sanctions on Nord Stream 2 AG, the company building a controversial gas pipeline from Russia to Germany.