The innocent victims of Germany′s postwar Soviet special camps | Germany | News and in-depth reporting from Berlin and beyond | DW | 30.08.2020

During the Soviet occupation of eastern Germany, Nazi war criminals were held in "special camps." But many innocent people were also imprisoned, often on flimsy charges, and many of them perished. 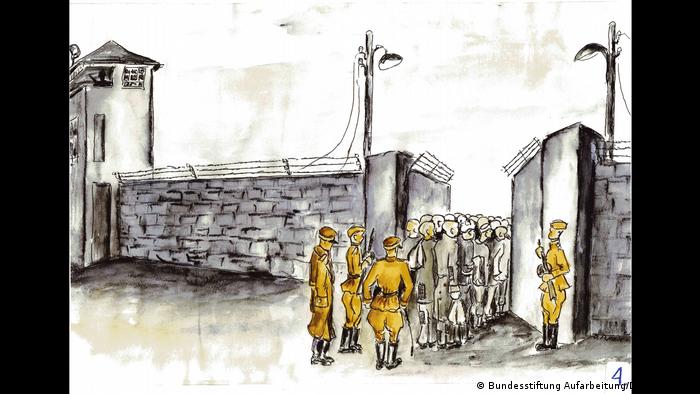 A picture of prisoners in the Soviet special camp at Sachsenhausen, drawn by Detlev Putzlar, who died in 2018

Karl-Wilhem Wichmann was studying to be a teacher in the northern German city of Greifswald. While giving a lecture on the future of the German people after losing the Second World War, he said a few things that ultimately spelled his undoing.

The then-18-year-old spoke out against Soviet-style land reform. Someone must have denounced him afterwards, because Wichmann was brought before a Soviet military tribunal and accused of spreading anti-Soviet propaganda. He was sentenced to 10 years in prison.

Wichmann was sent to a prison camp near Torgau, Saxony. "We didn't have day release, there were three of us to a cell, we had little to eat and we had to see how we spent our time," Wichmann, who is now 92 years old, told DW.

Torgau was one of 10 "special camps" established by the Soviet Union between 1945 and 1950, while occupying eastern Germany after World War II. The Western powers also built camps to house high-ranking Nazis and other war criminals in order to hold them accountable for their atrocities, as agreed to with the Soviets.

However, Soviet dictator Josef Stalin and his secret services had something else in mind from the beginning: They wanted to quash any protest or resistance to the establishment of a communist dictatorship in what was to become East Germany. As a result, thousands of innocent people were ultimately sent to the Soviet special camps. 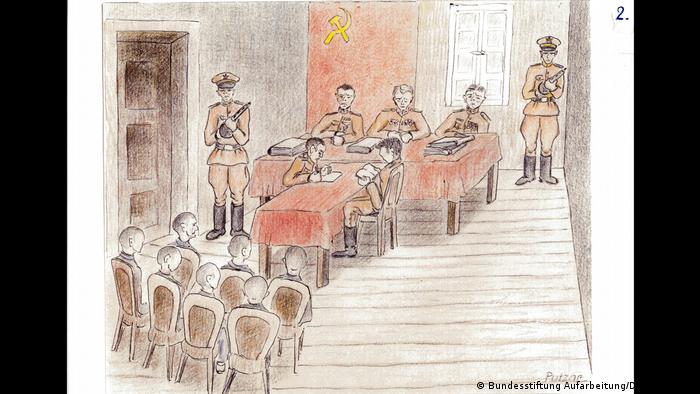 A Soviet military tribunal drawn by Detlev Putzlar, who was sentenced to 10 years in a prison labor camp in 1945

As cynical as it sounds, Wichmann was one of the lucky ones. Around one-third of the 176,000 prisoners did not survive the torture they endured, according to the latest estimates.

"They starved, they died from deficiency diseases such as tuberculosis or dysentery," Anna Kaminsky, who heads a government-funded foundation studying East Germany's communist dictatorship, told DW. She began studying the Soviet special camps shortly after the 1989/90 peaceful revolution that brought down the East German regime.

Her findings and those of other researchers corroborate the kind of mental and physical suffering Karl-Wilhelm Wichmann had to endure. He was imprisoned in the Soviet special camps in Torgau and then Sachsenhausen until 1950. Afterwards, he was returned to Torgau as a prisoner of the newly founded East German state.

A victim of East German propaganda

After he was released in 1954, Wichmann wasn't allowed to discuss his ordeal, at least publicly. "I was seriously instructed not to talk about it," Wichmann said. He only shared details with a few close confidants, including his wife.

Wichmann was well advised to remain silent, it turns out. All of the prisoners were stigmatized as Nazis in official East German propaganda, even though around one-fifth of them were not. Anyone who expressed doubt or reported on the conditions in the camps was guilty of "agitation" and "slander." 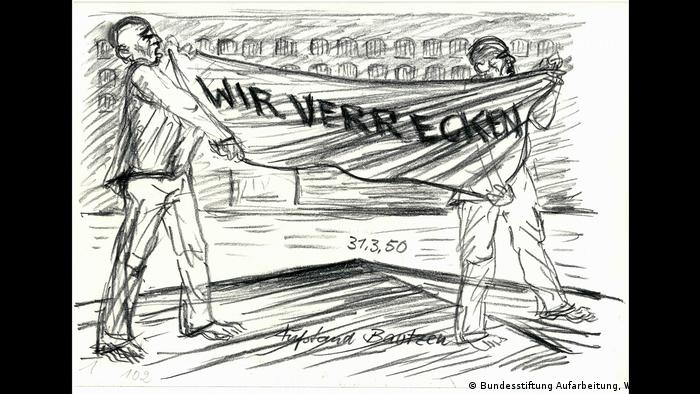 In this drawing, prisoner Wilhelm Sprick documented an uprising at a Soviet special camp in Bautzen

There are no known contemporary photos of the conditions behind the special camp walls. However, some prisoners were able to document what happened there through their own pictures and sketches. They include the illustrations featured in this article by Detlev Putzlar and Wilhelm Sprick. They were convicted on flimsy charges as teenagers in 1945 and sentenced to lengthy prison terms, which they served at multiple special camps. One of them was north of Berlin at Sachsenhausen, which was originally built by the Nazis as a concentration camp.

After the fall of East Germany, mass graves containing 7,000 dead were discovered at Sachsenhausen. The victims were not former concentration camp prisoners, but rather inmates of the special camp built at the same site. Because of these kinds of discoveries, and their high death rates in particular, some see little difference between the Soviet special camps and the Nazi concentration camps. However, Anna Kaminsky says that equating the two is out of the question.

At a site like Sachsenhausen, which housed two different kinds of camps, it is particularly important "to present the different camp phases, their historic contexts and the intentions of their operators in a differentiated and scientifically sound manner," Axel Drecoll, director of the Brandenburg Memorials Foundation, told DW. "One serious difference was the targeted mass murder, which was specific to concentration camp terror."

However, Drecoll added that it was also clear that thousands of people died from hunger and illness in Soviet special camps.

In order to distinguish the different characters of the camps at Sachsenhausen, the two areas have been separated and the victims are honored at different locations. Drecoll emphasized the importance of this distinction.

The victim forgives his torturers

On Sunday, a memorial service was held at the site of the Soviet special camp in Sachsenhausen. Former prisoner Karl-Wilhelm Wichmann was there. His wrongful conviction was confirmed by the Russian prosecutor general in the early 1990s. He was officially exonerated after the Soviet-era files became public. 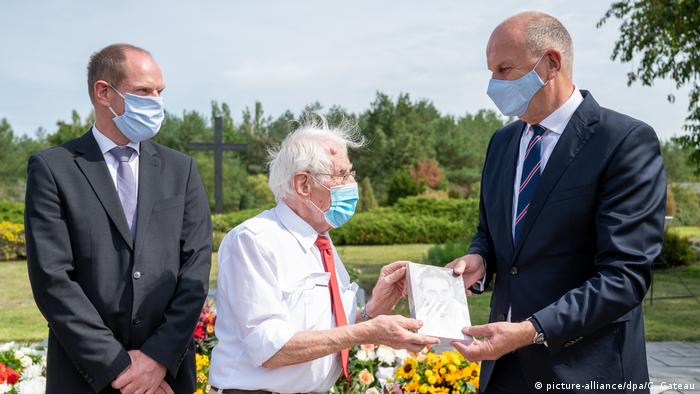 "I don't foster any hate," says Wichtmann today, despite everything that has happened to him. He considered himself as someone "who atoned for the crimes of the Nazi era." He was wounded while working as a "Luftwaffenhelfer," or air force assistant, during World War II. "I survived the horror of war — and also a terrible time after that." In connecting the memory of the crimes against humanity committed by the Nazis and his own personal fate in the Soviet special camps, Wichmann has one wish: "I would like for this to never happen to our grandchildren and great-grandchildren."

What US soldiers found at Dachau

When the soldiers of the US Army reached the Dachau concentration camp gate, they had no idea what was behind it: over 30,000 prisoners, many of whom had died, starved to death.

Builders made a grim discovery as they worked at a prison site in the German state of Saxony. While digging, they found the bones of several people thought to have been executed by the Nazis.