World War II and the battle over collective memory in Eastern Europe | Europe| News and current affairs from around the continent | DW | 09.05.2020 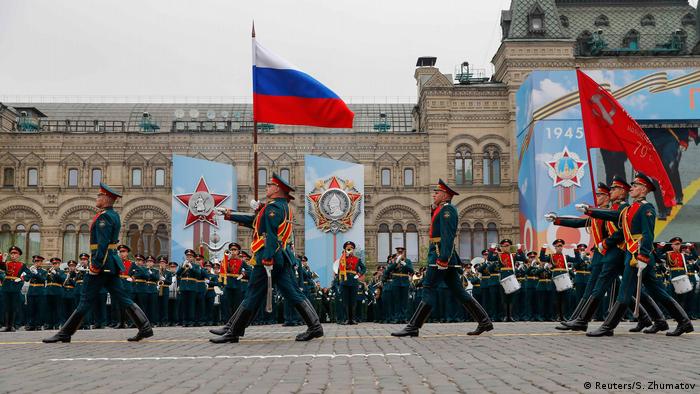 Seventy-five years ago, Russian, Ukrainian and other Soviet Red Army soldiers took Berlin. Still, there has not been a common commemoration of that historic event for years.

Recently, according to Berlin's Tagesspiegel newspaper, Ukraine's ambassador to Germany, Andrij Melnyk, turned down an invitation from Berlin Mayor Michael Müller to participate in a wreath-laying ceremony on May 2, alongside representatives from Russia and Belarus. Melnyk pointed to the ongoing war in eastern Ukraine, in which Kyiv views Russia as an occupying force, as the reason for his rejection.

But approaches to how Russia and Ukraine view the end of World War II did not suddenly begin to diverge with Russia's annexation of Crimea or the war in Donbass.

This year's commemorations have been upended by the coronavirus pandemic, and that is especially disappointing for Russia, the country that lost the most lives in the war. While the end of hostilities was never celebrated with pomp in the West, that was decidedly different in the Soviet Union and continues to be the case in Russia.

One major difference is the date marking the official end of the war. Whereas May 8, 1945, the day Nazi Germany signed its surrender in Reims, France, has marked the event in the West, Russia celebrates Victory Day on May 9. The later date comes from the fact that Soviet leader Josef Stalin insisted on another signing in Berlin on that date.

The decision to postpone this year's traditional military parade in Russia was very difficult for President Vladimir Putin according to his spokesman. It was not until mid-April, after weeks of sticking to original plans despite the spread of the coronavirus pandemic, that Putin announced no military parades would take place on Red Square in Moscow, nor anywhere else in the country.

This year's celebration was set to be one of the biggest in years, one that would have seen the return of high-ranking foreign guests, such as French President Emmanuel Macron, for the first time since Russia's 2014 annexation of Crimea. Still, according to the Kremlin, the health risks, especially for veterans, were simply too grave to proceed. Now, the only part of the event that is still scheduled to go ahead is the air show element of the celebration. 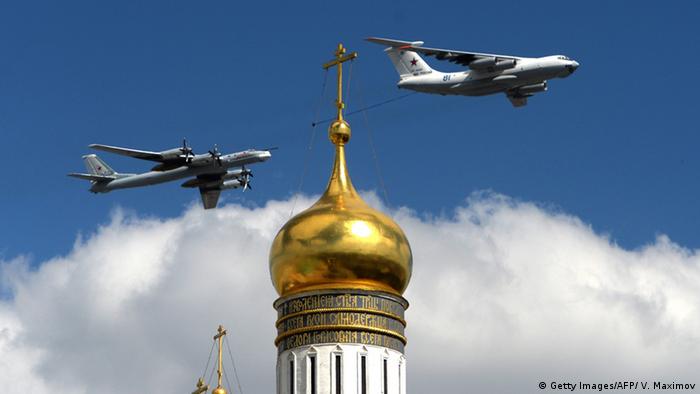 The air show element of the Victory Parade will go ahead this year, despite the coronavirus crisis

Russia inherited the May 9 tradition of "Victory Day in the Great Patriotic War" from the Soviet Union, yet it has undergone a number of changes since the fall of the USSR. In the 1990s, parades took place sporadically and were staged without tanks, missiles and other heavy military machinery.

When Vladimir Putin came to power he took a new tack, unofficially making Victory Day the nation's most important public holiday. From that point, the parade saw ever more soldiers participating, as well as the presentation of the country's most advanced military hardware. Another addition was that of the "Immortal Regiment," which the Kremlin adapted from regional groups marching in the streets carrying pictures of family members who fought in the war. Putin, too, has marched in such processions.

Putin at the front lines of the debate

But the Victory Day parade is not the only forum in which modern Russia eclipses the old Soviet Union when it comes to commemorating World War II. The commemoration of victory over Adolf Hitler and Nazi Germany has been expanded into a vehicle for mobilizing vast swaths of Russian society, not only socially, but also politically – the whole fitting seamlessly into Putin's declared ideology of patriotism. Other symbols of this shift can be seen in bumper stickers reading, "Thank grandpa for victory," or, "On to Berlin," as well as a recent increase in the number of new Stalin monuments going up around the country.

Not long ago, Putin interjected himself directly into the debate surrounding the idea of collective memory and the war. In late 2019, he criticized the European Parliament for claiming the Soviet Union had been partially responsible for the outbreak of the waras a result of the non-aggression pact signed by Nazi Germany and the USSR in August 1939 – allowing the two to divide Poland between them.

Putin vehemently denied that assessment, choosing instead to blame Poland, France and the United Kingdom for the start of hostilities as a result of their approval of the 1938 Munich Agreement.

Putin styles himself as a Russian warrior against what he calls the "falsification of history." Moscow author and DW columnist Viktor Jerofejew says the current "war of concepts" will continue as long as Russia sees itself as the "political and historical-ideological heir" of the Soviet Union. Jerofejew says the shift toward a more positive image of Stalin is just one part of this development.

Neighboring Ukraine, which was the second most populous republic in the USSR, has taken an altogether different approach to May 9. From 1991 onward, the country upheld Soviet tradition and continued to commemorate the date, although increasingly without military hardware.

As time went on, there was also an increase in attempts – especially in western Ukraine – to elevate and honor nationalist rebels who fought against the Soviet Union. Such sentiments were controversial as some of those nationalists had in fact collaborated with the occupying Nazis. Some politicians today seek to exploit and instrumentalize the tensions that such efforts have given rise to.

Ukraine then took a very big step away from Soviet tradition under President Petro Poroshenko. Since 2015, the country has observed May 8 as a day of remembrance and reconciliation focusing on the memory of the millions of lives the war took, much like it is in the West. While May 9 remains a national holiday, it marks the end of World War II and not the "Great Patriotic War."

Ukraine is currently in a transitional phase that has had hitches. For instance, bans on Soviet symbols such as the hammer and sickle have been the source of conflict, including some during May 9 marches.

The Saint George's Ribbon is another symbol that was banned in Ukraine in 2017. The black and orange striped ribbon has become a central symbol of Victory Day celebrations in Putin's Russia, where it is worn by veterans, politicians, artists and citizens.

In eastern Ukraine, however, it is also a symbol favored by pro-Russian separatists. That is likely yet another reason the Ukrainian ambassador decided to steer clear of commemorations alongside his Russian colleagues.

This story has been updated to reflect the Munich Agreement was signed in 1938.

Frank-Walter Steinmeier noted with sadness that due to the pandemic, commemorations are especially subdued this year. He also called on people to reject the temptations of "new nationalism" and isolationism. (08.05.2020)