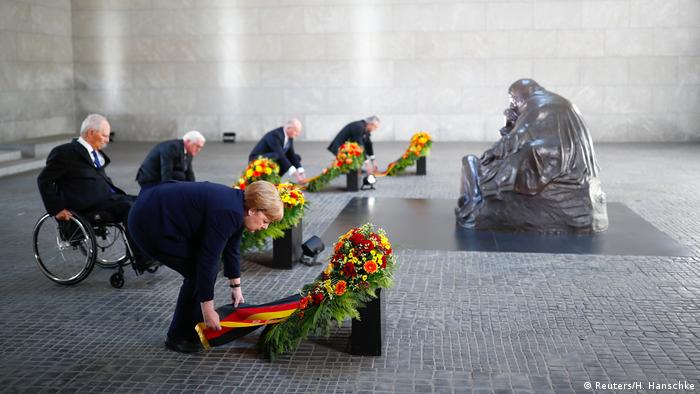 German President Frank-Walter Steinmeier and Chancellor Angela Merkel on Friday came together – 1.5 meters apart – to mark a somber and "lonely" commemoration for the 75th anniversary of the end of World War II in Europe.

In his speech, Steinmeier noted with sadness that representatives of the Allied nations that defeated Nazi Germany, as well as thousands of young people that had been invited from all over the world, were unable to attend the ceremony due to the coronavirus pandemic.

"Perhaps this being alone will take us back to May 8, 1945, because at that time the Germans were actually alone...defeated militarily, politically and economically…morally shattered. We had made ourselves the enemy of the whole world," Steinmeier said.

Speaking from the Neue Wache in Berlin, Germany’s main memorial to the victims of and dictatorship, the president noted that May 8,, 1945, the day the Nazis officially surrendered, "was the end of National Socialist tyranny, the end of bombing nights and death marches, the end of unprecedented German crimes and the Holocaust’s breach of civilization."

However, he noted, that while it is now called "Liberation Day," at the time, "it was far from being that in the minds and hearts of most Germans." It took years, indeed decades, Steinmeier noted, for Germany to undergo the process of de-Nazification and earn its place back in the community of nations. Steinmeier thanked the survivors of Germany’s crimes, the descendants of victims, and "all those in the world who gave this country the chance to start again," for allowing that to happen.

The president also struck a positive tone, at one point highlighting that today, Germany "is a strong, solid democracy…in the heart of a peaceful and united Europe. We enjoy trust and reap the benefits of collaboration and partnerships around the world."

But, Steinmeier warned, people must remain vigilant, amidst "the temptation of a new nationalism. The fascination of the authoritarian. Of distrust, isolation and hostility between nations. Of hatred and agitation, of xenophobia and contempt for democracy - because they are nothing but the old evil spirits in a new guise."

Alluding to a recent increase in xenophobic and anti-Semitic crimes, Steinmeier then spoke of the victims of three such attacks in the past year, in the cities of Hanau, Halle, and Kassel.

"You are not forgotten!" he said.

Steinmeier closed out his speech by calling on all Germans to reflect on the victims of the Holocaust and the other crimes of the Nazis before he and Chancellor Merkel laid a wreath at the Neue Wache.

Many events that had been planned to mark the liberation of several Nazi concentration camps throughout the course of April, all of which were either canceled or severely scaled back. This year, for the first time, May 8 had been declared a state holiday in Berlin, and many other events had to be called off due to the ongoing public health crisis.

Germany's minister for culture and media, Monika Grütters, said she was "endlessly sad" that the memorials had to be reduced to video messages or recordings of sparsely attended ceremonies.

Jens Wagner, the director of the memorial at the former Bergen-Belsen concentration camp, said that aging survivors were "deeply disappointed" that they could not attend this year’s event.

Wagner noted that they didn’t even know if they would be able to travel next year, and of course, how many would still be alive.

As survivors become fewer and fewer, commemorations can take on a new significance, reminding people in the absence of witnesses of the crimes of the Holocaust and as a warning not to repeat history.

For a transcript of Steinmeier's speech in English click here.

Is the view of World War II and V-E Day skewed? That's what British historian James Holland thinks and calls for a realignment of the way we look at those events. (07.05.2020)

Seventy-five years after the end of World War II, the legend of the innocent Wehrmacht is no more, says historian Hannes Heer. For decades, some Germans considered the SS to be the only war criminals. (07.05.2020)

How WWII affects the grandchildren of the war generation

A German filmmaker, plagued by nightmares of WWII battle scenes he never experienced, spent years looking into his family's past. He's not the only one who faced this problem. (08.05.2020)

75 years after WWII: Memorials in Berlin

Following years of violence and destruction, the Second World War ended 75 years ago. Many memorials in Berlin mark the historic events or commemorate the victims. (05.05.2020)

Countless memorials and monuments around the world commemorate the heroes and victims of the Second World War, which ended in Europe on May 8, 1945 with the victory of the Allied forces against Nazi Germany. (06.05.2020)

VE-Day marks Nazi Germany's unconditional surrender in WW2. Russia celebrates it on May 9. Increasingly, President Vladimir Putin has used the day to serve his own domestic purposes.