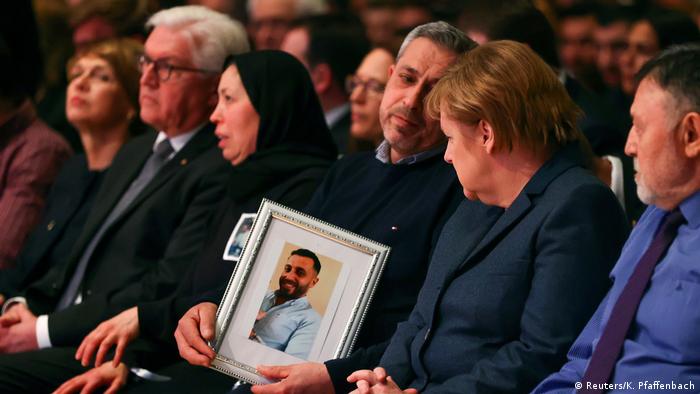 During the service, Steinmeier called the shooting an "attack on peaceful society" and a "brutal act of murderous violence," adding that it served as a reminder of Germany's "pre-existing history of exclusion and discrimination of people with a migrant or Muslim background, of so-called outsiders."

Steinmeier read out the names of the victims as well as the prime suspect's mother, who was found dead at his residence.

Read more: After attack, Hanau takes a stand against racism

The alleged gunman, 43-year-old German Tobias R., killed nine people in two different hookah bars in Hanau on February 19. He was found dead hours later at home, along with the body of his mother. Police are still investigating the likelihood that he killed her and then himself after the shootings.

German federal prosecutor Peter Frank told German media that all of the victims had an immigrant background. They included both German and foreign citizens. Prosecutors have attested that the gunman possessed a "deeply racist mentality." 'He grew up in Hanau'

Mirveta Mrkalj-Durben, a relative of Hamza Kurtovic — one of the victims of the Hanau shooting — spoke to DW  on Wednesday, explaining how her cousin was visiting the hookah bar for the first time when he was murdered.

"He called in with a friend to buy something, and both of them were killed. Hamza was to all intents and purposes German. He grew up in Hanau. He only spent his holidays in Bosnia, perhaps for seven days each year," she said.

Mrkalj-Durben was expelled from her hometown of Prijedor in western Bosnia in the early 1990s because of her Muslim background and came to Germany as a refugee. She also drew parallels with the conflicts her family had in the Balkans decades ago.

"Today, Europe is being defended in Hanau. He we are defending what we missed the opportunity to defend 30 years ago in Bosnia — in a country that was seen as part of "europe" with a small e."

'Fundamental values not secure without our support'

During the memorial service, the German president warned: "Yes, racism does exist in our country — and not just for a few weeks. Yes, there is widespread Muslim hostility," adding that people "with darker skin color or with a headscarf experience discrimination." Yet he stressed that this applied only to a minority of people, calling on the silent majority to combat such sentiment wherever it raised its head.

"Our fundamental values, our freedom, our peace — these are not secure without us," Steinmeier said. "Democracy does not live because the constitution commands it to. It lives and endures if we want it and if we stand up for it — against those who want to put it in question or undermine it. We must actively defend it. Us, the state, and me."

Steinmeier said "there are no second-class citizens" in Germany and "no gradations in being German." He said every person in the country "must be able to live in security and peace."

Hanau also held an evening service to honor the victims of the February 19 attack.

Kaminsky said a memorial in the city's main cemetery would be erected for the victims so that "their names" and "their suffering" would "never be forgotten."

German police say they are expecting attacks by far-left groups and cannot rule out a violent reaction from the radical Islamist scene. Politicians are also calling for gun ownership rules to be tightened. (22.02.2020)