After attack, Hanau takes a stand against racism | Germany| News and in-depth reporting from Berlin and beyond | DW | 04.03.2020

After attack, Hanau takes a stand against racism

Hanau has held a memorial service for the lives lost in an attack two weeks ago. Though the city is in mourning, local groups combating racism have found renewed support in the aftermath of the shooting. 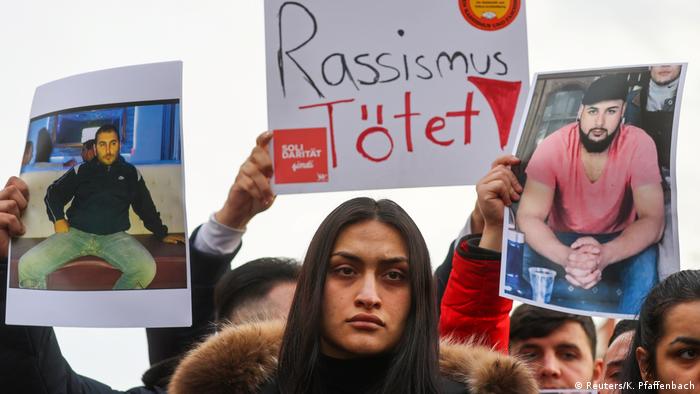 It's been two weeks since a mentally ill man killed nine people in a shooting rampage in the Frankfurt suburb of Hanau, in what investigators called a racist attack. The aftermath of the attack permeates daily life in the small town, as John Kannamkulam meets up with fellow campaigners to take a stand against racism.

Kannamkulam was born in Hanau and is the son of Indian immigrants. He's been actively involved in the city for years and helped initiate the International Weeks Against Racism, which has taken place for the past 25 years in Germany and for the past eight in Hanau. The events coincide with the UN International Day for the Elimination of Racial Discrimination on March 21.

"The most important thing is that we make our presence known on this day. And that we send a strong signal and stand together in solidarity against racism," Kannamkulam tells DW. 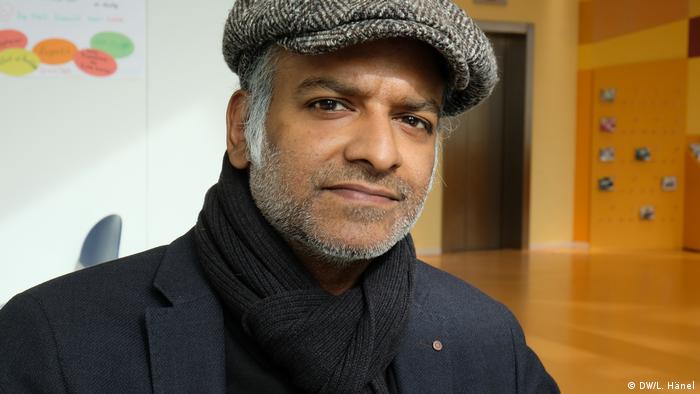 This year's event — which begins on March 9 and includes readings, film screenings and workshops — will inevitably be dominated by the attack on February 19. Kannamkulam says the attack affects everyone, not just those with immigrant roots.

"This is about our democracy, which is being threatened. Whoever doesn't understand that has already lost the battle," he says.

Seven of Kannamkulam's fellow campaigners have joined him downtown. Together, they set up an information stand outside of a shopping center, advertising the International Weeks Against Racism on two posters. Activists fan out in all directions to distribute pink flyers printed with the words: "100% human dignity."

Read more: 'Ferhat wanted to do something good for Hanau'

Wolfgang Kischel heads the council that coordinates the events and individual initiatives involved in the International Weeks Against Racism. Between conversations with passersby, he says that this year is the first time there were concrete inquiries and larger outside interest. 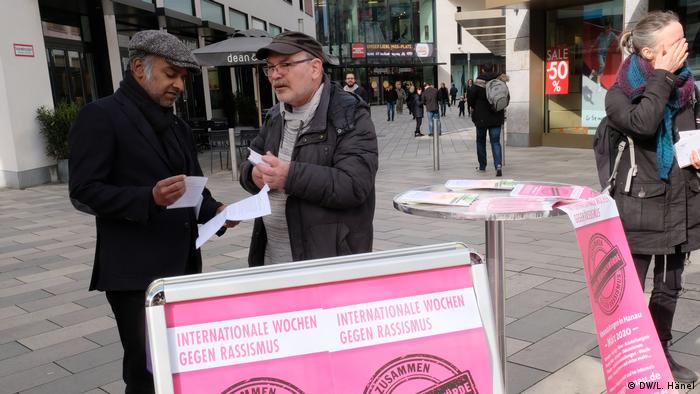 "Schools, for example, have asked me to either send them our program brochure or bring it to them," he says. "That didn't happen in previous years, so we had to make sure we could hand them all out. Out of around 3,500 brochures we now have around 800 left — the rest have been passed out to the public."

Distributing flyers is just the beginning. Out of respect for the victims of the attack, Kannamkulam and his colleagues plan on launching their larger promotional campaign only after the memorial service on Wednesday, which German Chancellor Angela Merkel is expected to attend.

But standing with the group in downtown Hanau, it quickly becomes apparent that there is already an interest in combating racism. After less than an hour, all of the flyers have been handed out. Even Hanau's mayor, Claus Kaminsky, stops by to talk to people about their concerns after the attack.

Kannamkulam wants to bring a few flyers to the town's Cultural Forum. The building in the center of Hanau has a library, public reading rooms and event spaces. In one of the welcoming, open rooms with tall windows, Kannamkulam meets with Elke Hohmann, who heads Hanau's adult education center.

The conversation quickly turns to the attack. On two Fridays in March, the Cultural Forum will host an open discussion group where everyone is welcome to share their thoughts and pain after the racist attack. 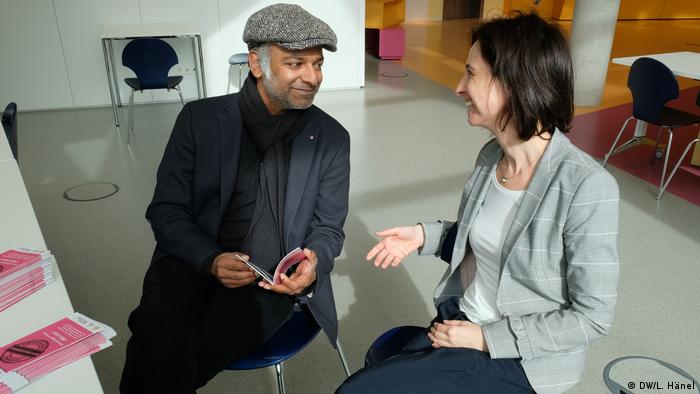 "People in Hanau are talking a lot about the attack. I think it's about processing and about dealing with all the feelings that come along with it — the worries, fears, and also anger that can arise," says Hohmann.

The International Weeks Against Racism will be no exception, Hohmann adds, saying she cannot imagine there will be an event that does not address the attack in some way.

Racism 'makes me an unequal person'

For Kannamkulam, who has experienced racist harassment since childhood, fighting racism begins with listening, and with people who openly come to him with an earnest desire to understand the damage that racism inflicts.

"Racism means dehumanization, it makes me an unequal person," he says.

But the work doesn't end there. There needs to be a new way of talking about racism and its impact, he says.

"My parents lived through racist experiences, but they never talked about it and were made to feel smaller as human beings. They were at a loss for words," Kannamkulam says. His parents' experiences convinced him to fight for a more open and diverse society.

Kannamkulam says racism can only effectively be fought with a two-pronged approach: making people aware of the issue, and at the same time prosecuting right-wing extremist groups with the full force of the law.

His hometown of Hanau is still in mourning, and Kannamkulam says citizens are processing the attack with the five stages of grief: denial, anger, bargaining, depression and acceptance. He hopes residents will be able to ride out the emotional, mentally draining waves that follow in the wake of trauma — and that in the end, a new and stronger sense of community will remain.

"We must not lose confidence," says Kannamkulam. "Looking back on the centuries of immigrant history in this city, including my family and other families, we will be able to do this together."

An expert group to tackle Islamophobia in Germany has been floated by Chancellor Angela Merkel's interior minister. The move follows a racist multiple shooting last week and precedes an integration summit in Berlin. (29.02.2020)