Germany′s worldwide call to arms against racism | News and current affairs from Germany and around the world | DW | 24.02.2020 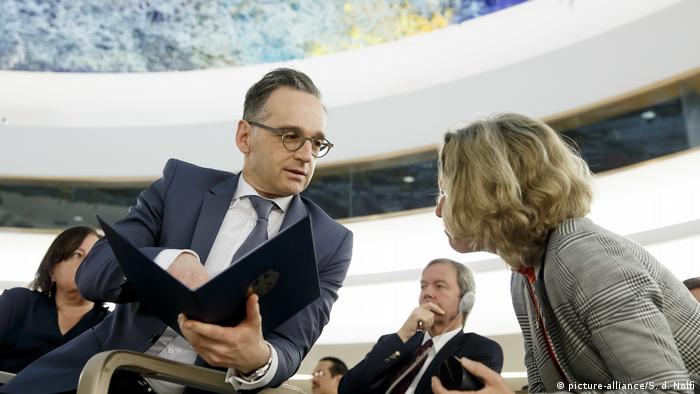 Countries should step up to fight racism and protect minorities from hate crimes, German Foreign Minister Heiko Maas said on Monday. The call comes a week after a right-wing extremist gunman killed nine people when he  attacked hookah bars in Hanau before turning the gun on himself.

Maas called racism a "disease" and said the whole world is suffering from it.

"It is a disease that blackens the entire world, a disease we must all fight together," he told the UN Human Rights Council in Geneva.
"We can wait for more attacks, more abuse, more violations of human rights to happen, more horror. Or we can decide that we have seen enough and take action."

Those who "look different," "live different," or "love different" suffer from hate, Maas said, before adding that hate and racism were also behind last Wednesday's attack on Hanau's migrant community in Germany.

A 43-year-old right-wing extremist shot dead nine people in two different shisha bars in the city of Hanau on February 19. He was found dead hours later at home, along with the body of his mother, in what appeared to be a murder-suicide.

German federal prosecutor Peter Frank told German media that all of the victims had an immigrant background. They included both German and foreign citizens.

Speaking in front of the Council, Maas also denounced the mistreatment of ethnic and religious minorities including China's Uyghurs.

He also talked about violent conflicts in the Middle-East and Africa, saying Germany was involved in the fight against impunity.

Maas condemned the ongoing violation of fundamental freedoms in North Korea, China, Egypt and Russia as well as human rights abuses in Venezuela.