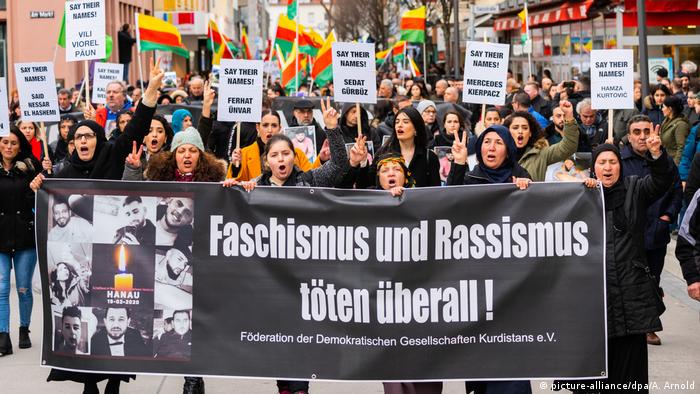 Thousands of people in the city of Hanau marched against right-wing groups and racism on Saturday in the wake of the double shooting that killed 11 people, including the suspect.

Police reported that about 3,000 people took part in the protests in the central German city, 15.5 miles (25 kilometers) east of Frankfurt.

Protesters first gathered in Freiheitsplatz — which translates as Freedom Square — in the city center to remember the victims of Wednesday's terror attack. They then walked throughout the city behind a banner that read, "United against racism and fascism," to the two places where the nine victims were shot.

Protesters held banners and placards with messages criticizing Germany's far-right AfD party for its xenophobic rhetoric. Placards included messages reading "Must people first have to be killed for you to be outraged?", "Human rights instead of right-wing people" and "Strengthen anti-fascist action." Some protesters carried pictures of the victims.

DW's Kate Brady said the protests had a palpable anti-AfD element, with people protesting not just against xenophobia, but against the far-right party and its rhetoric. The demographic of the crowds reflected Hanau itself, with a diverse mix of ages and backgrounds, according to Brady.

Read more: We all belong to Germany — but racism does not

The rally was organized by the "Solidarity instead of division," alliance.

Greens politician Cem Özdemir, who has Turkish background, presented a wreath for the victims of the attack. "It's hard to find words," he said.

Speaking in the Hanau neighborhood of Heumarkt, where the attacker shot some of the victims, he said he hoped "this year will go down in history as the year in which the republic takes right-wing radicalism seriously."

Leader of the Greens Robert Habeck also spoke out in favor of having the AfD monitored by the Federal Office for the Protection of the Constitution, Germany's domestic security agency. Habeck told German newspaper Passauer Neue Presse that the AfD "Fuels racism and encourages right-wing extremism."

Relatives of the victims also spoke out against racism at the rally and called for action. 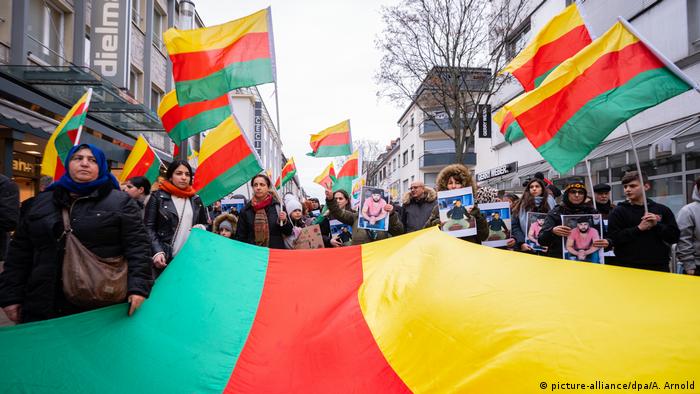 The alleged gunman, a 43-year-old German Tobias R.,killed nine peoplein two different shisha bars in Hanau on February 19. He was found dead hours later at home, along with the body of his mother, in what appeared to be a murder-suicide.

Investigators said all of the victims in the shisha bar attack were of immigrant origin — some were German nationals, while Turkey has said at least five had Turkish citizenship. Several of the victims were reported to be ethnic Kurds. The dead also included one person each from Bosnia-Herzegovina, Bulgaria and Romania. 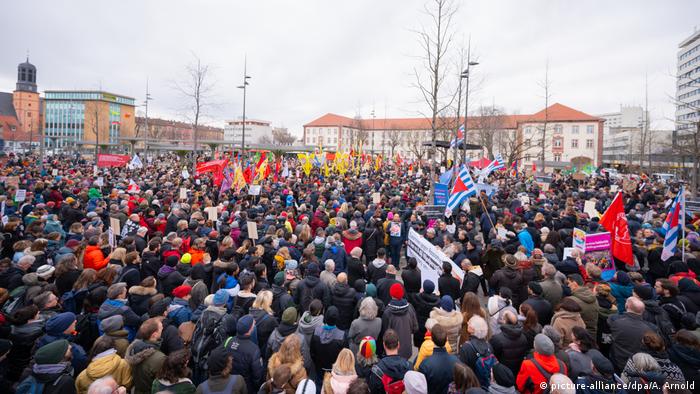 Around 3,000 protesters took to the streets in Hanau

German authorities confirmed on Thursday that the suspect behind the two shootings showed signs of a "deeply racist mentality." Attorney General Peter Frank said a video and manifesto posted on the suspect's website expressed "not only crazy thoughts and convoluted conspiracy theories, but also a deeply racist mentality." He cited this as the reason for the attorney general's office to immediately take over the investigation.