In a press conference, he warned that authorities should be braced for imitator attacks, pointing out this was the "third far-right attack in a few months."

He announced increased police presence all over Germany, especially in mosques, train stations, airports and at borders.

Seehofer also disagreed with center-left Social Democrat Justice Minister Christine Lambrecht, who identified far-right attacks as the "greatest threat to our democracy." Seehofer said he "could not accept," that statement.

"Far-left attacks are also a great danger," he said. 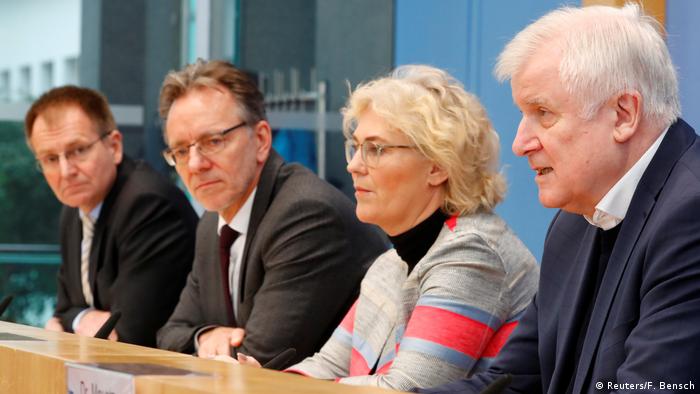 Lambrecht added that Thursday was a "day of great mourning," and announced plans for new legislation against hate crimes.

"We do not want to leave the victims and their relatives alone at this time," she added, stressing that German authorities had set up a 24-hour hotline for any who have questions.

Seehofer had announced extra security in Hanau on a visit to the Hesse town on Thursday.

German Muslim leader: 'This was not a lone attacker'

Aiman Mazyek, leader of the Central Council of Muslims in Germany said "these are not lone attackers any more" in a later press conference, referring to other far-right attacks in Germany in recent years.

"These people can access far-right hate easily," he said. "They get support from all over the world."

"What else needs to happen, so that this will never happen again?" he added.

What happened in Hanau?

Police reported that a gunman killed nine people in two different hookah bars in Hanau on February 19. Five Turkish nationals were among those killed. The suspect was found dead hours later at home, along with the body of his 72-year-old mother, in what appeared to be a murder-suicide.

A letter of confession written by the suspect and a video in which he espouses far-right ideology were also found. Federal prosecutors said they had taken charge of the case due to its likely extremist motivation.

"Today is the day we must show that we will hold together. We won't be intimidated," German President Frank-Walter Steinmeier said on Thursday.

Chancellor Angela Merkel called racism and hate "a poison in society." Thousands gathered for vigils to honor the victims on Thursday evening.

Christine Lambrecht's nomination as Germany's defense minister came as a surprise to many. The left-leaning Social Democrat may find it a challenge to win over the troops.

Germany marked the anniversary of a racist attack in the city of Hanau. Nine people with immigrant roots were gunned down by a far-right extremist, who subsequently shot himself. The victims' families say they still have more questions than answers.