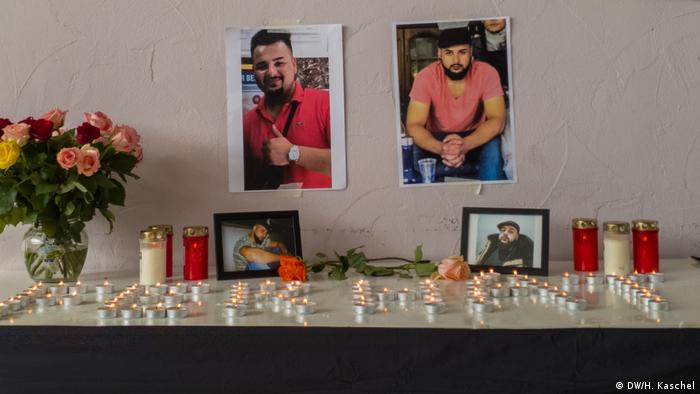 Candles, flowers, and photos on a table on display in memory of Ferhat Unver, a 23-year-old man killed in a xenophobic shooting in Hanau

Two days after the extremist far-right murders in Hanau, something resembling normal everyday life is returning to the streets around the city's central Heumarkt area. Not far from the Midnight shisha bar, which is still cordoned off, people of different ages and backgrounds go in and out of bakeries, drugstores, and banks.

Just a few meters from the scene of the crime is Mustafa Bayram's grocery stand. The 59-year-old Turkish-Kurdish man sits behind a glass counter filled with baklava, stuffed dates, and sunflower seeds. "I have been here for over five years. I'm not afraid. Why should I be afraid, if I get on well with my customers, with the people?" Bayram has lived in Germany since 1978. Aside from a robbery, he says nothing has ever happened to him here. 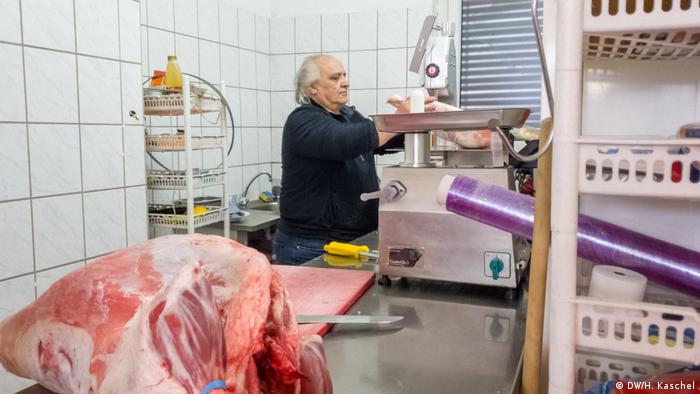 Mustafa Bayram sells meat and other groceries in his store

Bayram says a journalist asked him whether he wants police protection in the wake of Wednesday's shooting. He said no. "Why should police come and stand outside waiting with me for 12 hours? If someone is afraid, they can stay home, they can stop going out. If something happens, it happens. But I don't think anything will happen."

Read more: Hanau: What we know about the victims

After the Hanau attack, German Interior Minister Horst Seehofer called for a stronger police presence throughout Germany. Federal and state police will be deployed at airports, train stations, and border crossings. Mosques and other "sensitive institutions" will be more heavily guarded, he said. Meanwhile, the Central Council of Muslims in Germany has called for "visible protection" at mosque communities.

Saban Sakalikaba is somewhat open to the increased security measures. The 32-year-old works in a Turkish barber shop run by his brother, where he offers tea as he sits down for a short interview. "If somebody comes in here now, you take a careful look. Because what happened in the shisha bars could also happen to us in the shop." 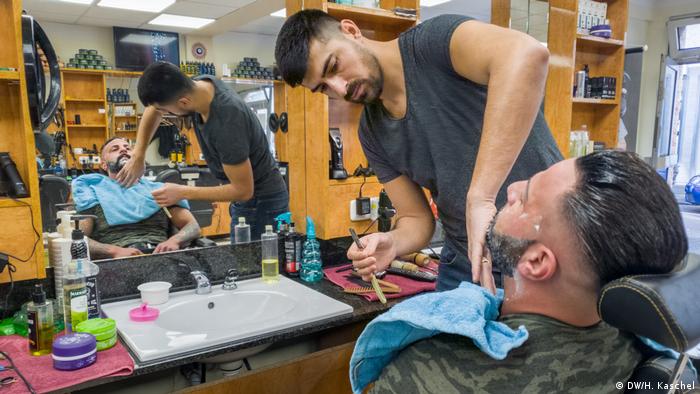 Saban Sakalikaba would like a greater police presence in his neighborhood

Sakalikaba was born in Turkey, but has lived in Germany since he was nine. After the attack, which took place just minutes from where he works, he says he hopes "there will be more protection for businesses, that maybe now there will also be more police in the street sometimes, that in the coming weeks there will be a little more security."

He says he could never have imagined that a man would kill nine people for racist reasons in his hometown, which he describes as "multicultural."

"This is a Turkish barber shop here," Sakalikaba says. "People from every nation come to us. Germans, Italians, Turks, Arabs, people from Africa. We are good with everyone."

Read more: Opinion: We all belong to Germany, but racism does not

'Right now we have to show strength'

Safia Shams, an 18-year-old student with Afghan roots, says she would have "never expected" an attack like Wednesday's "right in a city like Hanau, which is known for diversity and multiculturalism." She says that on the day after the shooting, some of her fellow students didn't feel safe going to school. "Right now we have to show strength," Shams says. People have to show they are standing up "against hate, against terror."

The young woman, who wants to study law or dentistry after graduating from high school, said she hoped that Germany would now do more to oppose the comments coming from Germany's main far-right party, the Alternative for Germany (AfD). Citizens should "show what Germany actually stands for. What Germany is, what German values are, what our democracy and our freedom are here." 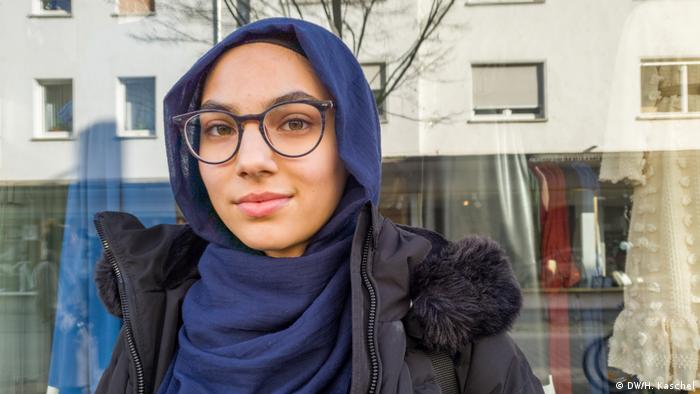 As a German with grandparents who emigrated to Germany, everyday racism is not foreign to her, Shams says. She still notices it, even today. "As a teenager, it's much harder for me to find a part-time job, for example. Or I get looks or comments on the street. Unfortunately this still happens, even in a city like Hanau, which is very close to Frankfurt, where many people with foreign backgrounds live."

A grandfather built the streets of Hanau. A grandson installed the heating.

In an industrial area about five minutes by car from Heumarkt, men and women with chai and coffee sit on benches in front of an orange bungalow with lace curtains. Peeling lettering adorns a sign on the building: "State Side Insurance" and "Auto Shipping".

In fact, the building houses a Kurdish association. Soft drinks and fruit are served on long tables in a hall. On a table at the back of the room the name "Ferhat" is formed with tea lights. Above them hang pictures of 23-year-old Ferhat Unvar, who was shot dead on Wednesday evening while fetching cigarettes from a kiosk in the Kesselstadt district.

The community is only gradually realizing the full scope of the tragedy, "that we miss these people, that they're gone forever," says Aydin Yilmaz, a cousin of Ferhat Unvar's father. "We'll never again hear that burst of fun and laughter or spend evenings sitting together in shisha bars."

Ferhat, who grew up with two brothers and a sister and loved to play football, was a peaceful and cosmopolitan person, "a young man who had dreams, who had ideas about his future," says Yilmaz. He had just recently completed his training as a heating installer and wanted to start his own business. Loud, piercing weeping can be heard as Yilmaz is speaking — other relatives of the young man are sitting in the next room. "Ferhat wanted to do something good for Hanau. His grandfather built the streets of Hanau back then as a guest worker. Ferhat wanted to give the people a warm home. Now his own home is cold."

'We are all Ferhat'

As people with non-German backgrounds, do they feel adequately protected? "If we need to, of course we will call the police and they will continue to be our friends and helpers. But I think it's much better if we look after each other together: The German neighbor, the German friend, the Afghan family, all together." 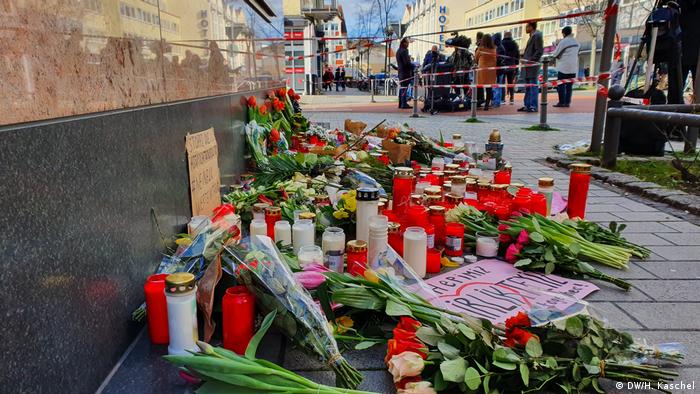 Candles and flowers near the Midnight shisha bar in Hanau

As for getting an explanation for the violent crime, Yilmaz has "complete trust" in the authorities, the German government, and German law. Like many others in the past two days, he has been calling for social cohesion. After the attack in Hanau it should now be clear to everyone how serious the situation is and that action has to be taken. Now is the hour of solidarity.

"You can already see people trying to drive us apart, but we won't let them. We're still open-minded. We're still citizens of this country. We're all Ferhat. We're all just like each other. We're standing here and will continue to live together. Peacefully."