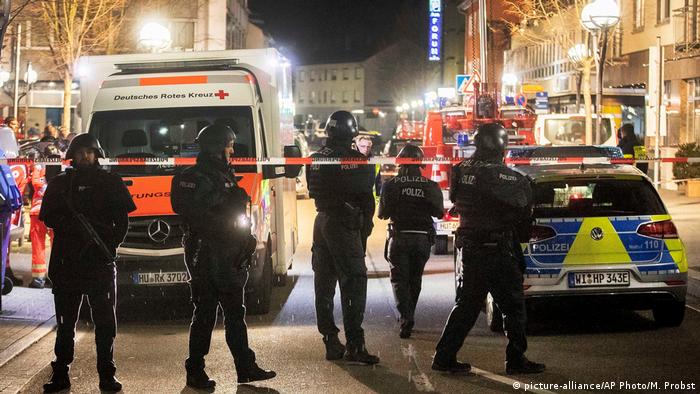 Security forces in Germany are preparing for possible reprisal attacks in the wake of this week far-right shootings in Hanau, one of the country's biggest media outlets reported on Saturday.

The Funke media group cited terrorism investigators as saying that revenge violence by left-wing extremists is now likely, as well as attacks on representatives of the far-right Alternatíve for Germany (AfD) party.

The sources told Germany's third-largest media publisher that although there were no specific threat of reprisals from the country's radical Islamist scene, the possibility cannot be ruled out.

On Wednesday evening, a 43-year-old German man shot dead nine people in Hanau, near Frankfurt. His victims all had an immigrant background. The gunman was later found dead in his home, along with his 72-year-old mother.

As well as fears over reprisals, security is being stepped up at mosques across Germany as they may be targets for further far-right attacks.

Meanwhile, two German political parties have floated the possibility of having mandatory psychological assessments for gun owners and applicants.

"After the violence in Hanau, we have to examine very seriously whether we need to readjust the weapons law," Social Democrat Party interior affairs expert Helge Lindh told the newspaper, Die Welt.

"If It turns out that the authorities cannot sufficiently examine the psychological or personal suitability of gun owners, we must reform the law accordingly."

It's possible that in the future, the approval of gun ownership licenses will require the presentation of a psychological report or test, he said.

"If it is true that [Hanau gunman] Tobias R. was only recently psychologically evaluated for his gun permit, this does not cast a good light on the evaluation process, " Irene Mihalic, domestic policy spokeswoman of the Green parliamentary group in the German parliament told Die Welt. The goal is to only allow those who have the "physical, cognitive and psychological aptitude for possessing firearms" to receive legal ownership permits.

Read more:Germany in shock and rage: reactions to the shooting in Hanau

In Saturday's edition of Bild, Seehofer also demanded additional psychological tests in the form of a "medical report or confirmation" for holders of firearms permits. It must be guaranteed "that everything is in order there and that the mental instability of a person does not become a danger to the general public."

'Blind in the right eye'

Seehofer has insisted that Germany had already stepped up efforts to tackle far-right extremism. Increased resources have been devoted to fighting crimes by neo-Nazi groups, including the recruitment of hundreds of new federal investigators and domestic intelligence agents, he said.

Prior to the Hanau attacks, the German cabinet approved a bill to crack down on hate speech and online extremism. Under the proposed legislation, internet companies will have to report a wide range of hate speech to police. Additionally, retweeting such material or condoning it publicly could be subject to prosecution.

"We are not blind in any eye," Seehofer insisted, in reference to accusations that German security forces are "blind in the right eye," or have easily overlooked right-wing activity and racism.

Holger Münch, head of the BKA, Germany's equivalent to the FBI, said the threat from mentally disturbed people has grown in recent years, as they latch on to ideas often found online and turn violent.