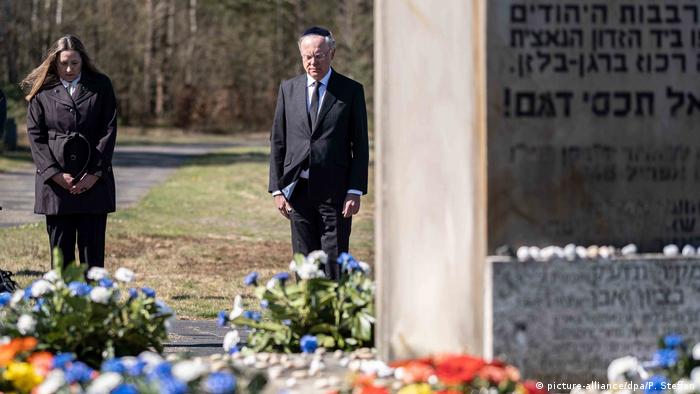 Commemorative gatherings originally planned to mark the April 1945 liberations of three former Nazi deaths camps — near Hanover, and north of Berlin — were largely replaced on Sunday by politicians' digital and video messages.

Only at Bergen-Belsen, east of Hanover, did Lower Saxony State Premier Stephan Weil lead a very small gathering instead of a planned 5,000-guest event — postponed due to the pandemic until April 2021.

Jens-Christian Wagner, director of the memorial site on the grounds where 52,000 inmates — including Anne Frank — and another 20,000 prisoners of war perished, said elderly survivors were "deeply disappointed."

They did not know if they would be fit for travel next year, or "whether they would even still be living," said Wagner.

In her video message from London, cellist and survivor Anita Lasker-Wallfisch, who had been foreseen as the main speaker, said Belsen was unique in that without gas chambers its inmates "simply perished" under the inhumane conditions.

Premier Stephan Weil of Germany's center-left Social Democrats (SPD) described Bergen-Belsen as a place that "shows us the cruelty and mercilessness of the darkest part of our history."

"Over 20,000 people lost their lives in Sachsenhausen concentration camp. If we held a minute's silence for each of them, there would be silence for two weeks," Maas estimated.

Referring to Germany's current role as rotating chair of the International Holocaust Remembrance Alliance, the foreign minister said Berlin would use the year to "battle against those who deny or distort the history of the Holocaust."

Whereas many people asked was God present, "my father asked often, where was the human being in these times," said Rabbi Nachama.

In her Sunday message, Monika Grütters, Germany's minister for culture and media, said she was "endlessly sad" that April 2020 remembrances were largely reduced to digital events.

Grütters, who had originally been due to deliver the key address at Ravensbrück, also north of Berlin and once a major Nazi camp holding women, said it remained a "perpetual task" to remember the victims and the inhumane crimes committed.

Small ceremonies had also been held last Wednesday and Thursday at Sachsenhausen and nearby Ravensbrück.

Ravensbrück memorial site director Insa Eschebach said in a video presentation on public Berlin-Brandenburg television (rbb) that initially 40 survivors and their relatives and "many further guests from around the world" had been keen to attend the 75-year commemorations.

A program with 30 events had also been planned, including exhibitions and readings.The interest was great, Eschebach said "because here in this camp 120,000 women and children from over 30 countries were imprisoned."

In the postwar period, many women survivors became politically active on issues of humanitarian and European importance," said Eschebach. "There children and their offspring remember the fate of their mothers and grandmothers and are long associated with Ravensbrück."

"Unfortunately because of the coronavirus we had to cancel," said Eschebach. "That was really hard."

From 1939 to its liberation in late April 1945 by Soviet troops, historians estimate that 28,000 inmates died at Ravensbrück.

Only employees of Buchenwald's memorial site attended the anniversary event due to Germany's coronavirus lockdown measures. Authorities called out increasing right-wing extremism in a "Thuringian declaration." (11.04.2020)