Karl Cramm’s father was one of the more than 1 million German soldiers still considered missing after WWII. The 83-year-old had last seen him when he was just a boy. Then he got some surprising news. 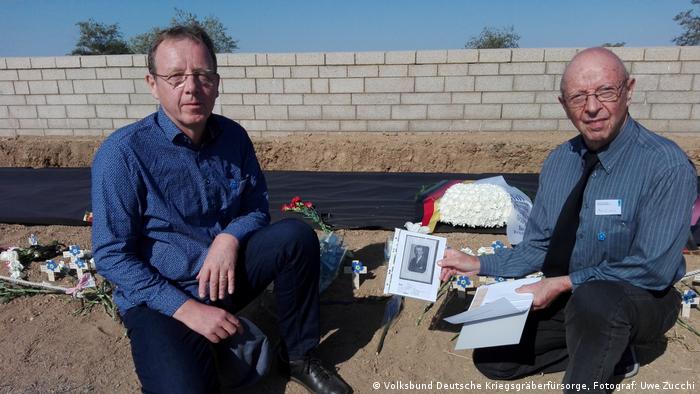 Karl Cramm will never forget the day in June 2019 when he received the kind of message he never expected to be confronted with. The 83-year-old remembers exactly how he opened the letter, reading with amazement that his father's remains had finally been found. The letter had been sent by the German Federal Archives, which assists families in discovering the fates of the missing.

Seventy-six years had passed since his father, a soldier in the Wehrmacht, disappeared in the Russian city of Stalingrad, today called Volgograd. "When I last saw him, I was five years old," Cramm says.

His father's last letter from the front came in January 1943, arriving in the village of Gross Lafferde, near the western city of Braunschweig where most of the family still lives. After that, the letters that his mother sent 3,000 kilometers (1,864 miles) away to Stalingrad were returned unread.

"Our grief was profound," he says.

Thereafter, there was no sign of his father, who was drafted by the army in 1939 and sent directly to the front. In 1942, the young corporal received his marching orders toward Russia. Stalingrad, which had been attacked and then besieged by the Wehrmacht in the winter of 1942-43, is well-known for being the location of one of the most brutal and costly battles in terms of casualties of any World War II campaigns.

Childhood without a father

In the years after the war, he felt his father's absence very strongly, explains Cramm.

"I was so sad when I would see other children with their fathers, knowing mine would never come back," he says, adding that he had to help with the harvest so that his family could afford everything he needed for school.

"When other children were out playing, I was working in the field with my mother."

Later, after getting a job as a commercial clerk, he started a family of his own. But he always hoped he would find something out about his long-lost father. He sought the help of the German War Graves Commission ("Volksbund Deutsche Kriegsgräberfürsorge"), which tends the graves of soldiers killed during the war and searches for the remains of the missing. The commission estimates that 1.3 million German soldiers were never found.

But all Cramm's research was in vain — until a letter arrived last summer from the Federal Archives.

"At first, I simply could not believe it, that any news had come at all," explains the 83-year-old. "I was of course dumbfounded and began to cry." 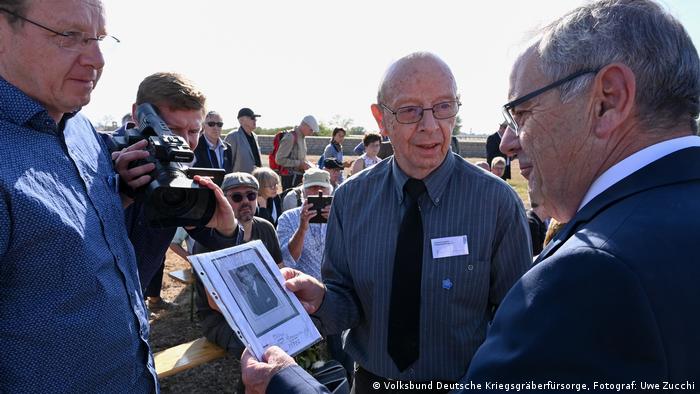 His father's bones were found on a construction site in Volgograd. They were part of a mass grave of more than 1,800 German soldiers.

For Cramm, the discovery was almost miraculous. "My joy was incredible," he says. There is no way to know exactly when and how he died, "but I am happy that I know where he has been laid to rest."

That the fallen man in a mass grave in Volgograd was ever identified as Cramm's father is thanks to the identification tag that was found with his remains. Every Wehrmacht soldier had to carry such a marker with them, expressly for the purpose of identifying them in the event of their death. However, in many cases, after so many decades buried underground, these markers can be too damaged to read or have disappeared entirely.

But in this case, the oval piece of metal was still there — somewhat weathered, but luckily, legible. However, the marker still had to be decoded. His name was not written on it, just his identification number. 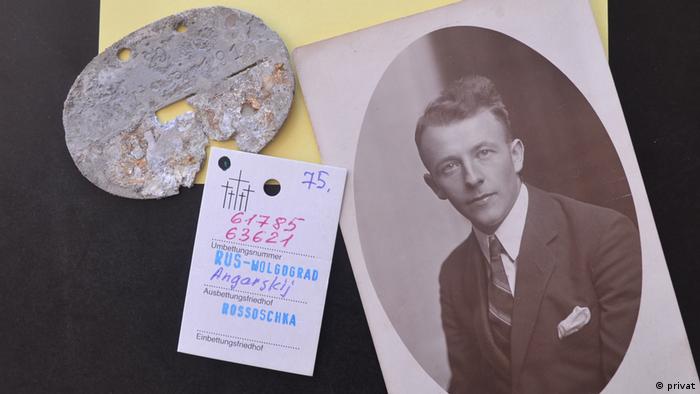 Returning names to the dead

The marker was then sent to the archives in Berlin, the only place where it could be decoded. There, specialists like historian Robert Balsam track down the names to which the numbers were assigned. For his research he must draw on a treasure unique to the archive: a comprehensive file of every single German soldier who fought in World War II, from private to general.

"There are more than 18.5 million name cards here," explains Balsam, pointing to all the gray file boxes sitting on his shelves.

The card index was created during the war and gradually added to. Each card contains personal and military information on a soldier, including the identification number. For the missing, a relative's address is also included.

"There are still many people who are searching, and for whom this is a part of their life," the historian says. Cramm, alongside his son who accompanied him on a trip to Russia, pay their respects at a funeral ceremony.

Some 1,200 identified every year

The chances of a soldier's fate being unearthed after 75 years are not actually that slim. Remains are constantly found during construction projects, excavations, exhumations, and in former battle fields.

"Every year, about 1,200 soldiers classified as missing are identified here," Balsam says. For him, every single identification is a "completely special moment," because then a family gets not only knowledge of their relative, they have a place to lay flowers and find closure.

Only after such an identification, says Balsam, is it possible for many to say, "Now it is finished for me, now I know where he is."

It was just like this for Cramm. After receiving the letter from the Federal Archives, he made his way to Russia. He traveled to Volgograd with his son, where his father's remains were buried at Rossoschka German War Cemetery. He took part in the funeral ceremony, laying a bouquet of white lilies and a photo of his father on the grave. He also brought flowers to the memorial for the Soviet soldiers, as a sign of reconciliation.

"The most important thing for me was that I could take his identification marker with me after that," he explains. "He carried it from the beginning of the war to the end, so it is a part of him."

The marker is now in the 83-year-old's bedroom, where he can see it every day. "For me, it's like my father has come back."

Hundreds of descendants of German Jews who fled Nazi persecution have been fighting for years for naturalization. The Interior Ministry last year eased restrictions — but, for many applicants, it’s not enough. (12.02.2020)