The unconditional surrender of the German Wehrmacht came into effect on May 8, 1945 at 11 p.m. Western European Time. 75 years later, Europe is again being put to the test, writes the author György Dalos. 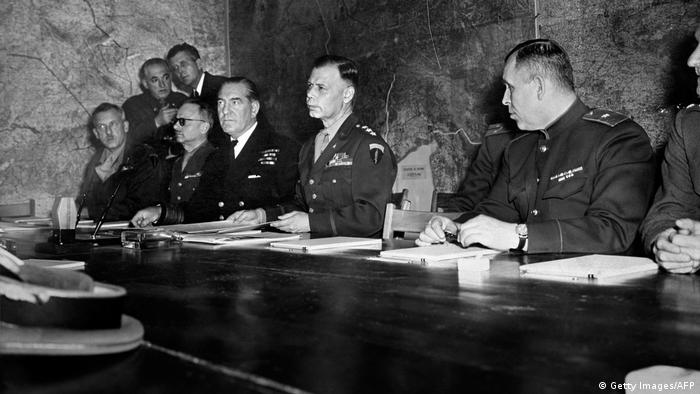 For the European continent, World War II ended on May 9, 1945. At least, that is the date the anti-Hitler coalition agreed should be marked as Victory Day, instead of May 8, when some units of the German Wehrmacht were still pursuing military activities, in defiance of the act of surrender at Reims. At the same time, fighting in the Far East between Japan and the United States was still raging as intensely as ever.

Only the two atomic bombs dropped by the Americans on Hiroshimaand Nagasaki, as well as the entry of the USSR into the fighting in Manchuria in northeast China, led to the unconditional surrender of the Japanese Empire on September 2, 1945 — the final act in the global conflagration that had erupted almost exactly six years earlier.

Read more: Opinion: When victory does not mean liberation 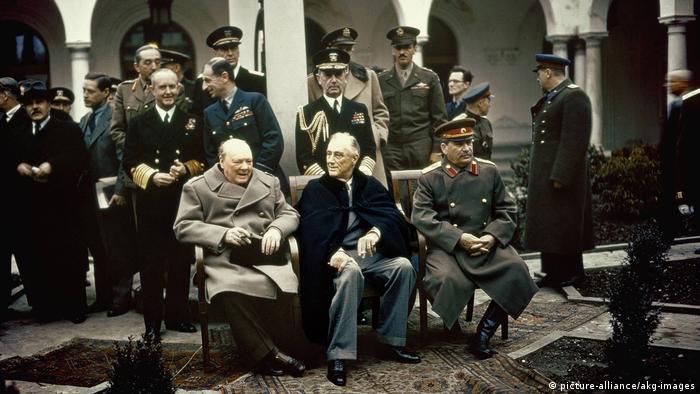 Churchill, Roosevelt and Stalin at the Yalta Conference

Amid the euphoria of peace, however, the first cracks in the Allies' solidarity were becoming apparent. Many contemporary witnesses and historians considered Winston Churchill's "Iron Curtain" speech in Fulton, Missouri, on March 5, 1946 to be the start of the new, open confrontation.

On his trip to the United States, and in the presence of US President Harry Truman, the British statesman — by then no longer prime minister — warned the Western world of the "communist threat" by announcing: "From Stettin in the Baltic to Trieste in the Adriatic, an iron curtain has descended across the Continent. Behind that line lie all the capitals of the ancient states of Central and Eastern Europe. Warsaw, Berlin, Prague, Vienna, Budapest, Belgrade, Bucharest and Sofia, all these famous cities and the populations around them lie in what I must call the Soviet sphere, and all are subject, in one form or another, not only to Soviet influence but to a very high and, in many cases, increasing measure of control from Moscow."

Read more: The Yalta Conference, where the postwar world began

Although Churchill also expressed in the speech his "strong admiration and regard for the valiant Russian people" and his "wartime comrade, Marshal Stalin," he was also pretty unambiguous in calling for the Western powers to show greater readiness for war against the Soviets. He was convinced that "there is nothing [the Soviets] admire so much as strength, and there is nothing for which they have less respect than for weakness, especially military weakness."

In his essay "You and the Atomic Bomb," the British author George Orwell coined the catchy term "Cold War" to define the state of the world that this precise demarcation of borders had produced.

The metaphor of the "Iron Curtain" became manifest in the so-called "technical barrier and fortification system” that sealed off the Eastern Bloc from the Western states. Between Hungary and Austria alone it consisted of an entanglement of double rows of barbed wire that stretched for 243 kilometers (151 miles), as well as 3 million anti-personnel mines. Even some "real socialist" countries created monstrosities inside their own geographic space, such as the Berlin Wall or the 170,000 bunkers for the "emergency" that Albania fabricated for propaganda purposes.

The Iron Curtain speech was not the trigger for the long-lasting conflict between the former allies and victors; rather, it was the fixation of their common planning for a post-war order, in which Churchill had been personally involved. In the midst of the war, it must have become clear to the Western Allies that the Soviet Union's disproportionate commitment and sacrifice meant it would claim corresponding compensation and future territorial protection zones, and that it would be quite capable of lending military weight to its demands.

Churchill's concerns were with how Moscow could be given its own sphere of influence while also curbing its desire to expand. In this spirit, his speech contains, as well as the declaration of cold war, a discreet offer of an equally cold peace. Whole generations grew up in this "cold peace," a balance of fear and nuclear parity. No wonder that, a good 40 years later, they reacted with such enthusiasm to the opening of the border and the dismantling of the Wall, as if these events had ended all wars for them, achieving a peace in which there were no victors and no defeated, and a return home. The idea of a "House of Europe" was the magic formula.

Europe to the test

Despite their subsequent division, the triumph of the anti-Hitler coalition of 1945 ensured alternating phases of tension and relaxation: relative stability for our battered continent. Elsewhere, in the Middle East, in Africa and Asia, and for some years now also in Ukraine, there is armed conflict, the consequences of which reach us every day in the form of refugee movements.

Even the calm in our own region is relative. The integration process initiated in 1989 is by no means running smoothly; euroskeptic or anti-Europe parties are emerging in almost all countries, and some are even in positions of power. The current, drastic, global pandemic now poses a new challenge with regard not only to coming together in solidarity to combat the terrible pathogen, but also to thinking about what will come afterward. In a way, Europe is being put to the test yet again.

Seventy-five years ago, the Battle of the Bulge began. It would be the Nazis' last significant counterattack on the Western Front, with the aim of breaking through to the Channel and disrupting Allied supply chains. (16.12.2019)

Germans using too much gas, could face emergency later authorities warn 1h ago

Joe Biden pardons anyone convicted of marijuana possession 2h ago