Japan is marking 73 years since the the US dropped the atomic bomb on Hiroshima. A somber ceremony honored the people killed and injured and also served as a call to eliminate nuclear weapons. 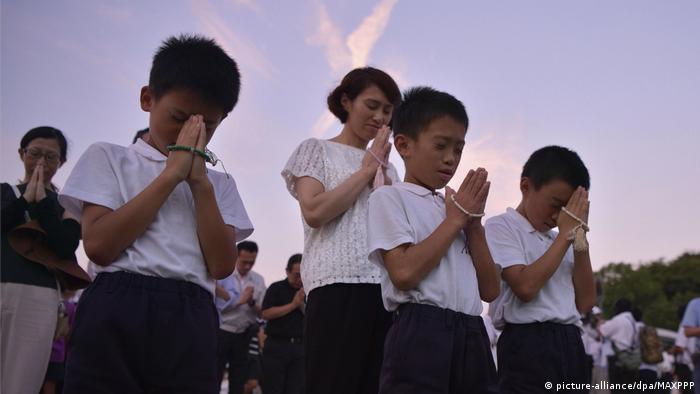 Tens of thousands of people gathered about 700 hundred kilometers (420 miles) west of Tokyo on Monday to commemorate 73 years since the US dropped the atomic bomb on Hiroshima. Mayor Kazumi Matsui opened his address at the annual ceremony by describing the scene on August 6, 1945, and the agony of the victims, telling the audience to listen "as if you and your loved ones were there."

"Certain countries are blatantly proclaiming self-centered nationalism and modernizing their nuclear arsenals, rekindling tensions that had eased with the end of the Cold War," Matsui said Monday, without identifying the countries.

Matsui called nuclear deterrents and umbrellas "inherently unstable and extremely dangerous" approaches that seek to maintain international order by only generating fear in rival countries. He urged world leaders to negotiate in good faith to eliminate atomic arsenals. "We in civil society fervently hope that the easing of tensions on the Korean Peninsula will proceed through peaceable dialogue," he added.

The US attack on Hiroshima ultimately killed more than 140,000 people; the bombing of Nagasaki ended another 70,000 lives three days later. The bombings, the first atomic attacks on humans, closed World War II and opened the nuclear age. Barack Obama, who had sought a policy of nuclear arms reduction,visited the site in 2016. 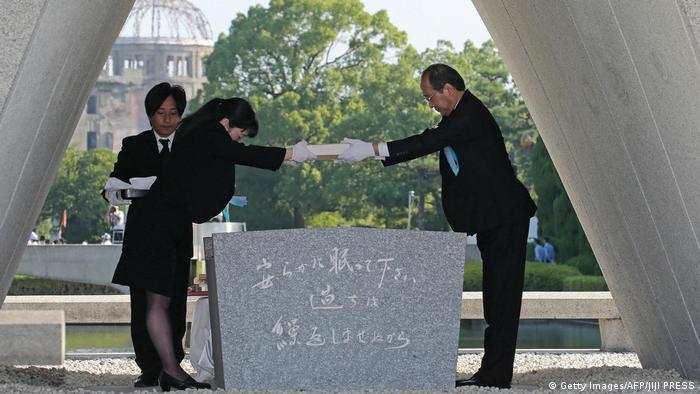 Participants in Monday's ceremony — survivors, Prime Minister Shinzo Abe and representatives from 80 countries — observed a minute's silence at 8:15 a.m., the moment when the US dropped its payload on the unsuspecting population 73 years ago. Matsui urged leaders to steadily work toward achieving a world without atomic weapons, and called on Abe to help the Treaty on the Prohibition of Nuclear Weapons take effect. Japan, which hosts US troops on its land and falls under the protections of the US's nuclear umbrella, has not signed the treaty.

"If the human family forgets history or stops confronting it, we could again commit a terrible error," Matsui said at the event on Monday.

The anniversary comes as optimism has grown that North Korea may voluntarily denuclearize after Supreme Leader Kim Jong Un and his US counterpart, President Donald Trump, made statements implying as much after they met in Singapore in June.

Abe said differences between the nuclear and non-nuclear states had widened, but he pledged to do more to bridge their gap.

In order to gain cooperation, Abe said, world leaders must understand "the reality of the tragedy of nuclear attacks," and reiterated Japan's pledge to maintain its pacifist and nonnuclear principles.

Daily at 1830 UTC, DW's editors send out a selection of news and features. Sign up to receive it here.