President Obama has laid a wreath at a memorial in Hiroshima, paying tribute to the victims of the world's first nuclear attack. He has also called for fewer nuclear weapons, but did not apologize for the bombing. 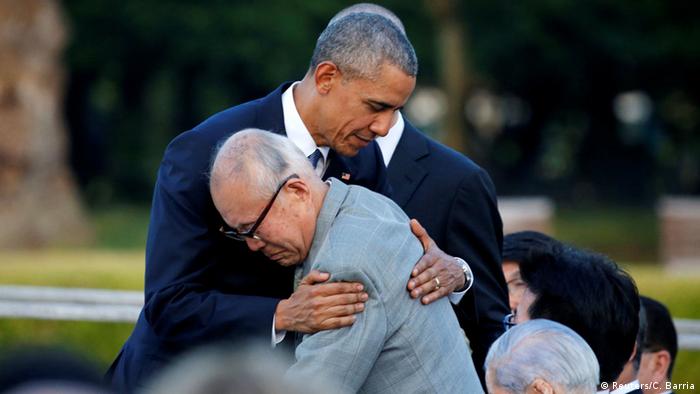 US President Barack Obama visited Hiroshima's Peace Memorial Park on Friday, making him the first sitting US head of state to visit the Japanese city.

"Seventy-one years ago, death fell from the sky and the world was changed," the president said after laying a wreath.

"We come to ponder the terrible force unleashed in a not-so-distant past," Obama said. "We come to mourn the dead."

The US leader also called for a reduction in nuclear arms, saying: "We must change our mindset about war itself."

Following his speech, the president shook hands and spoke with bombing survivors.

"We must reimagine our connection to one another as members of one human race," emphasized Obama. 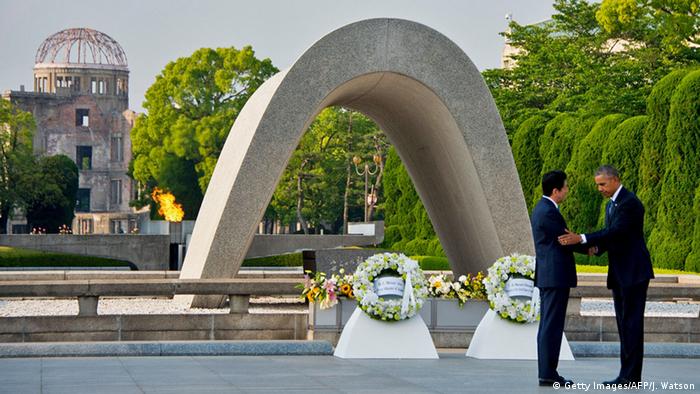 Hiroshima was devastated after a US B-29 bomber dropped an atomic bomb on August 6, 1945.

The bombing killed tens of thousands of residents in seconds, totaling some 140,000 by the end of the year.

Three days later, US armed forces dropped another atomic bomb on the port city of Nagasaki, claiming the lives of over 70,000 people that year.

Prior to his Hiroshima visit on Friday, Obama met with Japanese and US troops at Iwakuni air station and said the visit was a reaffirmation of "the great alliance" between Japan and the United States.

"This is an opportunity to honor the memory of all who were lost in WWII," he told the troops. "It's a testament to how even the most painful divides can be bridged. How two nations can become not just partners but the best of friends."

Obama made it clear ahead of the visit that although he would honor the victims of WWII, he would not apologize for the decision taken by the late US President Harry S. Truman.

"I will not revisit the decision to use atomic weapons in Hiroshima and Nagasaki, but I will point out that Prime Minister (Shinzo) Abe and I coming to Hiroshima together shows the world the possibility of reconciliation," Obama said in remarks published by the Asahi newspaper on Friday.

Many people in US view the bombings as a necessary to end the war and save lives, although some historians question this belief.

Most Japanese believe the use of the A-bombs was unjustified.

There's much to discuss at the G7 summit in Japan, as worldwide crises mount and tensions with Russia and China heighten. DW's Michaela Küfner says the leaders are going to have to do more than just smile for the camera. (26.05.2016)

Mary Murakami: "A part of US history most people don’t want to hear about"

During World War II, many Japanese-Americans were forced into internment camps. One of them was Mary Murakami. She talks to DW about her experience and why her story is particularly important today. (27.05.2016)

Family killed in Israeli airstrike against Syria 28m ago

Google threatens to block Australia from search engine 1h ago