Ruth Ur, the director of the German section of Yad Vashem, Israel's official Holocaust memorial, tells DW why a fresh perspective on remembrance work is more important than ever — even during the coronavirus crisis. The offices of the German section of Yad Vashem, the World Holocaust Remembrance Center, are surprisingly low-key. But even though there's nothing spectacular about the space, Ruth Ur, the director of the organization, enjoys the fact that her office overlooks a synagogue and a courtyard with a sukkah — a hut where the Jewish festival of Sukkot is celebrated every year. The view connects her directly to a community of people who, like her, have chosen to live and practice their faith in Berlin, the city where the horrors of the Holocaust were initiated.

Today's Germany is, of course, not the same country it was under the Nazis. "So much work has been done, especially since Reunification, in the area of Holocaust Remembrance, education and commemoration, including the opening of Holocaust memorial sites, new literature, and all sorts of educational materials and resources," Ruth Ur points out. Despite this, there is often a level of indifference towards the difficult topic, she adds: "I sometimes have the feeling that a crust has grown over the subject. People feel like, 'Oh yeah, it's terrible, but I know what that's about and I've dealt with it.'"

Ur therefore sees it as her and Yad Vashem's work to "find new ways to puncture that crust" and to make sure that the subject is never closed. For instance, one of their recent projects was the exhibition "SURVIVORS. Faces of Life after the Holocaust" in Essen, which featured close-up portraits of the 75 survivors taken by star photographer Martin Schoeller.

The fresh perspective of an outsider

Ruth Ur wasn't specialized in Holocaust education before becoming the director of the German section of Yad Vashem in July 2019. She had previously spent the past two decades working all over the world for the British Council, the UK's international organization for cultural relations and educational opportunities. Her last role was as director of the UK-India Year of Culture in 2017. 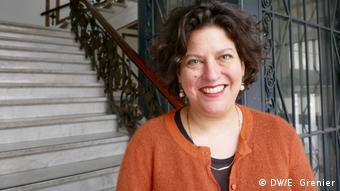 But after moving to Berlin with her family in 2012, she wanted to find a way to anchor her life in the German capital. In 2018 she started a consultancy agency, urKultur, whose realizations include a series of art in public space commissions for Deutsche Bahn, as well as the feasibility study for the planned Holocaust Museum of Greece in Thessaloniki.

The London-born director's multi-faceted identity — being British, German and Israeli —gives her a unique perspective on the topic. Her manifest optimism could also feel unusual in a field dedicated to the remembrance of unthinkable atrocities: "When I was offered the role, I found it hard to see myself in a subject which is so despairing and so hopeless, and I hesitated," she recalls, "but then I thought, this is a job that must be done, and it must be done with energy and vitality and you need to bring a kind of freshness to it. It didn't take too long to make up my mind: I thought, I have to do it." 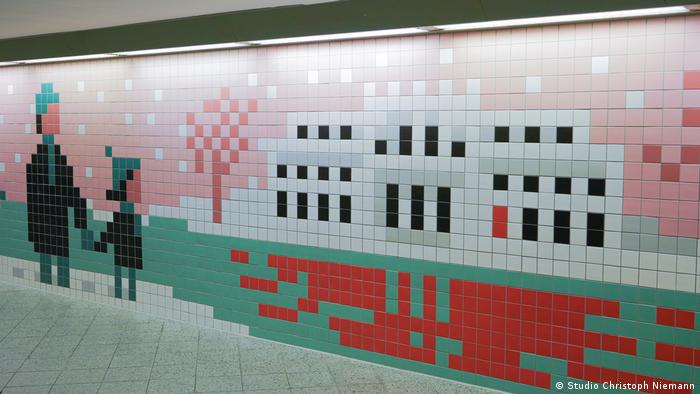 A bloody past: This mural by Christoph Niemann, commissioned by Ruth Ur for Deutsche Bahn, refers to the infamous Wannsee Conference from 1942, when Nazi leaders decided on the extermination of the Jews

Yad Vashem is Israel's official memorial to the victims of the Holocaust. Its museum presents the story of the Shoah in a unique architectural setting. Located on the Mount of Remembrance, the body of the building designed by Safdie Architects is mostly underground. It cuts through the hill, with a route leading visitors through its exhibition galleries and concluding with the impressive Hall of Names (top picture), to finally open to a panoramic view of Jerusalem.

The free museum has around one million visitors each year, but like so many other public institutions around the world, it is currently closed due to the COVID-19 pandemic. 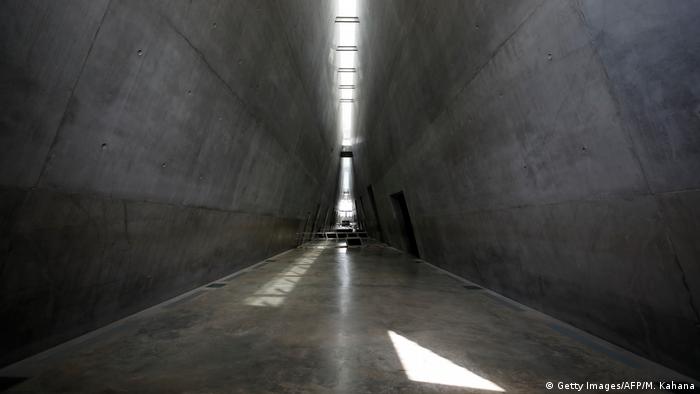 The institution was fortunately well equipped to react to the situation. Since Yad Vashem's main purpose is to collect and record loads of information for posterity, it has one of the top IT and digital departments in the world. Online alternatives were therefore quickly set up in reaction to the crisis.

As this year marks the 75th anniversary of the liberation of Nazi concentration camps, a very large German delegation was expected to go to Yad Vashem for Yom HaShoah, the Holocaust Remembrance Day ceremony, held on April 20-21 in Jerusalem. But for the first time ever, the ceremony took place without a live audience. The pre-recorded event was broadcast online with a German translation instead. "So ironically, we were able to reach a much bigger audience than we would have normally," points out Ur.

In her work, Ruth Ur is called upon to deal with a wide range of people: politicians and corporations, as well as with Holocaust survivors who are eager to tell their stories.

Like countless other vulnerable elderly people around the world, the remaining eyewitnesses are currently confined to their homes because of the pandemic. "This period is bizarre for Holocaust survivors; it brings back a lot of memories," says Ur, who is regularly in contact with a number of survivors. But she's also observed that there is a lot to learn from their resilience as well: "We have to support them, and at the same time, they support us, through what they've experienced in their lives."

While the world media has been focusing on developments related to the pandemic, 75 years after the end of World War II, anti-Semitism remains a worrying issue. Online hatred attacks have even been increasing during the coronavirus crisis, as a recent report by the Kantor Center at Tel Aviv University revealed.

For 2020, Germany is in charge of the presidency of the International Holocaust Remembrance Alliance, and a main focus of the intergovernmental organization this year is combating Holocaust disinformation and denial. "I think the German Presidency's choice of this theme is good, as we are losing more and more of the eyewitnesses," says Ur. "And there's going to have to be more work done to keep the facts straight."

The Holocaust memorial day event was being held on the video-conferencing platform Zoom because of the coronavirus. Activists barged in, posting pictures of Hitler and shouting anti-Semitic slogans. (21.04.2020)

As part of their international match trip to Israel, the DFB women visited the Yad Vashem Holocaust memorial and confronted Germany's dark past.

Members of the women's national football team were moved by a visit to the world's biggest Holocaust memorial in Jerusalem. It came a day after they had struggled to beat Israel in a World Cup qualifying match.