When US soldiers reached the gate of the Dachau concentration camp on April 29, 1945, they had no idea what horrors awaited them. War reporter Martha Gellhorn shared what she saw with the world.

On the morning of April 29, 1945 the "Rainbow Division" of the Seventh US Army reached the closed gates of the Dachau concentration camp near Munich. The German Wehrmacht had long since withdrawn, and most of the SS guards were on the run.

Without exchanging fire, the US soldiers entered the camp, and were shocked by what they saw: hundreds of corpses in barracks and freight cars, half-starved traumatized prisoners, many with typhoid. Only a few of them could stand on their own.

There was, however, a group of somewhat stronger concentration camp prisoners as well, who, earlier that month, in the chaos of the overcrowded barracks, had conspiratorially formed an underground resistance organization. They introduced themselves to the American GIs as the International Prisoners' Committee. 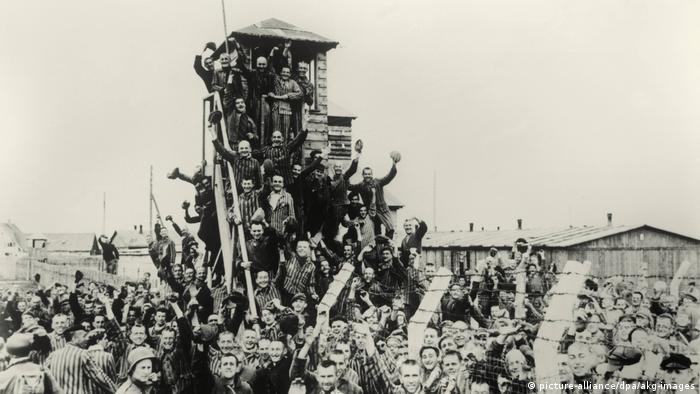 Prisoners rejoicing following the liberation of the concentration camp on April 29, 1945

The smell of death wafted through the camp

"Behind the barbed wire and the electric fence, the skeletons sat in the sun and searched themselves for lice. They have no age and faces; they all look alike..." wrote American journalist Martha Gellhorn, who as a war reporter, had been accompanying the advancing US troops through occupied Europe since the previous October.

A few days later, in the early days of May 1945, she entered the liberated concentration camp and described her shock in her writing: "We crossed the wide, dusty compound between the prison barracks and went to the hospital. In the hall sat more of the skeletons and from them came the smell of disease and death. They watched us but did not move: No expression shows on a face that is only yellowish stubbly skin stretched across bones."

Reporting from the gates of hell

Since the beginning of the Spanish Civil War in 1936-38, Martha Gellhorn had been reporting for major American newspapers from wars all over the world. She also happened to be the wife of novelist Ernest Hemingway, whom she married in 1940. As an "embedded journalist" she accompanied the US army on the front lines. On April 26, 1945, she and the GIs reached the Allgäu, and in early May, she was sent to the liberated Dachau concentration camp. 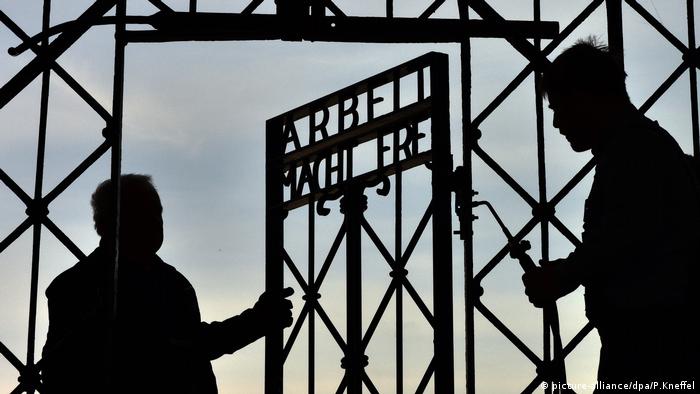 The main gate of the former concentration camp, with the infamous Nazi slogan 'Arbeit macht frei' ('Work sets you free')

"What killed most of them was hunger; starving to death was a routine matter here," the reporter summarized her shocking observations and initial conversations with surviving prisoners, who told her about forced labor and everyday life in the camp. "One worked these long hours on meager rations and lived so overcrowded, cramming bodies into unventilated barracks, waking up weaker and weaker each morning, expecting death."

Living next to the crematorium

Gellhorn gathered from the camp files that well over 200,000 prisoners were interned in Dachau concentration camp since its opening in 1933. "It is not known how many people died in this camp in the 12 years of its existence, but at least 45,000 are known to have died in the last three years," the American journalist wrote in one of her reports. Her numbers were later corrected to take into account even more deaths in various sub-camps as well as those resulting from other schemes of the SS.

The facts and figures related to the death toll and human conditions inside Dachau shows that even the experienced war reporter was shaken. Towards the end of her article, she can no longer suppress cynicism. 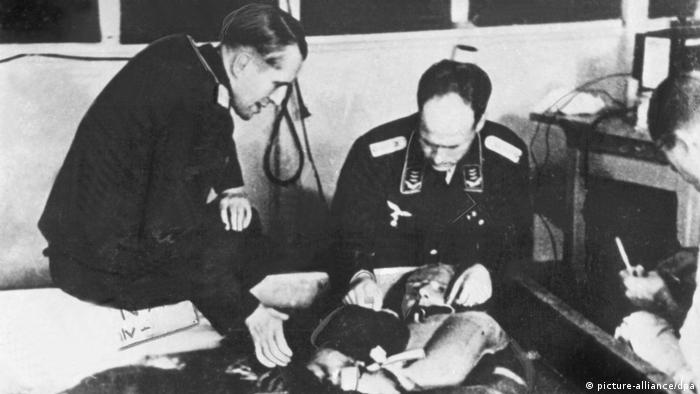 Inhumane medical experiments were performed at the concentration camp; here a subject is immersed in a tank of ice water

"And in front of the crematorium, separated from it by a stretch of garden, stood a long row of well-built, commodious homes," she wrote in May 1945: "The families of the SS officers lived here: their wives and children lived here quite happily while the chimneys of the crematorium spewed out human ashes. ... Prisoners were killed in the gas chamber because, though they were too weak to work, they did not have the grace to die, so it was arranged for them."

Training camp for the SS

Dachau was one of the first concentration camp that the Nazis built on German soil. By order of Nazi leader Heinrich Himmler, Chief of Police, an internment camp for 5,000 male prisoners was built in a disused ammunition factory near at the gates of the small Bavarian town of Dachau in spring 1933. From its construction to its administrative organization, Dachau became a model for the other concentration camps. 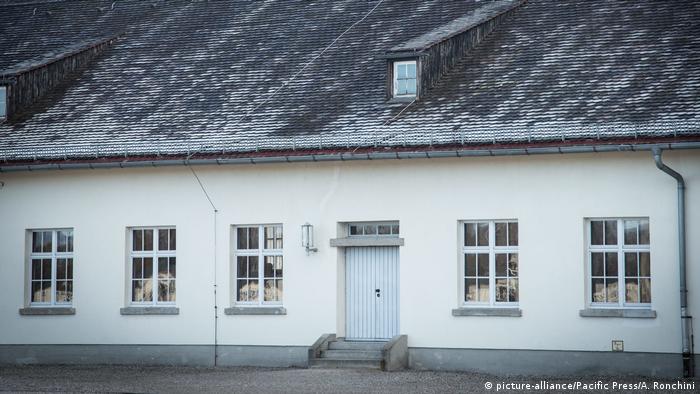 Opened March 22, 1933 on the initiative of Heinrich Himmler, Dachau was the first Nazi concentration camp

The first commander was Hilmar Wäckerle. As of October 1933, Theodor Eicke, a stout Nazi and SS officer, took over and made Dachau into what he considered to be a "model camp."

The first prisoners in Dachau were political prisoners: opponents of the Nazi regime, trade unionists, social democrats, communists, homosexuals and in some cases, conservative politicians. They were later followed by criminals, Jehovah's Witnesses, Sinti and Roma, politically committed Christians, and also Jews.

Eicke also developed orders for the criminal treatment of the inmates. With military drills and merciless severity, he trained SS supervisors to get used to torture, brutal violence and being part of the killing machine. Renowned for his unscrupulousness, Eicke also personally murdered the disgraced SA leader Ernst Röhm in 1934. 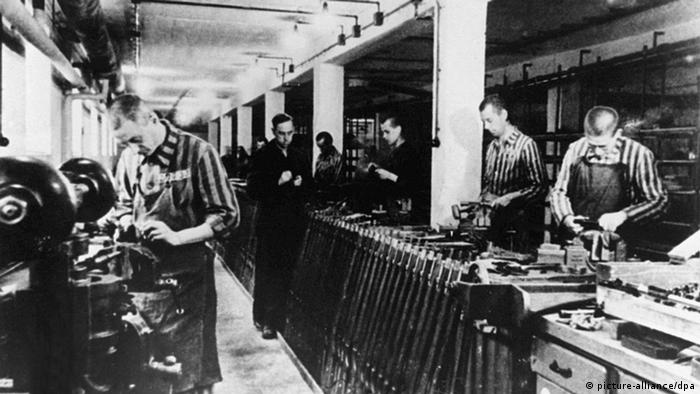 As the prisoners dragged themselves from the barracks to the roll call square in the early morning of April 28, 1945, they were amazed to see that the SS had raised a white flag on one of the watchtowers. Most of the SS men had long since fled.

The remaining guards tried to keep the prisoners in check with machine guns. Rumors ran through the camp like wildfire. The next day, the liberators of the Seventh US Army reached Dachau. It was the second to last of all concentration camps to be liberated by the allied troops.

On April 30, 1945, the Americans marched into Munich, where the Nazis had established the "capital of the movement," as it was called in Nazi jargon, which contained the party headquarters of the Nazi party. On the same day, they learned that Hitler and his partner Eva Braun had committed suicide in their bunker in Berlin.

The last transports of prisoners were liberated by US troops in early May. On May 8, 1945 the "unconditional surrender" came into effect, and the war was finally over.

The Nazi past of relatives could and can be a taboo subject in some German families. But a number of descendants of Nazi criminals want to find out more in a quest to come to terms with themselves. (21.04.2020)

After 14 years in office, the chancellor has visited Nazi Germany's most notorious concentration camp. While there, she underscored her country's enduring responsibilities. (06.12.2019)