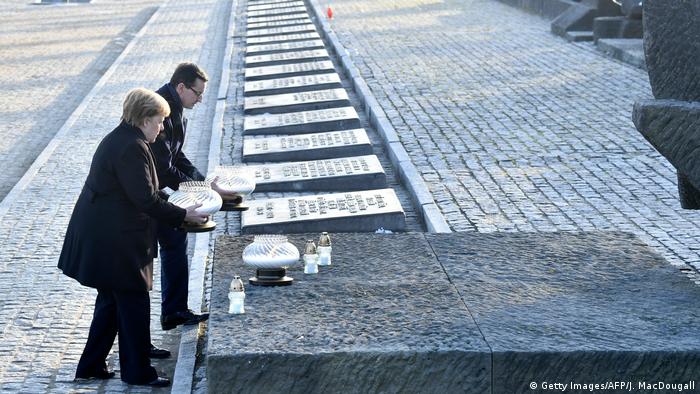 German Chancellor Angela Merkel and Polish Prime Minister Mateusz Morawiecki stood silently in front of the Death Wall at Auschwitz, in the tiny courtyard where Nazis executed thousands of Poles. It is a site that remains extremely painful for Poles to this day.

Under a blue sky in Friday's bitterly cold December air, Merkel, in a long black jacket but without gloves, scarf or hat, stood contemplatively with her Polish counterpart for 30 or 40 seconds. It was her first visit to Auschwitz as chancellor. When the chancellor and the prime minister turned around once again, deep in thought and with heads bowed, her eyes remained closed for a very long time. 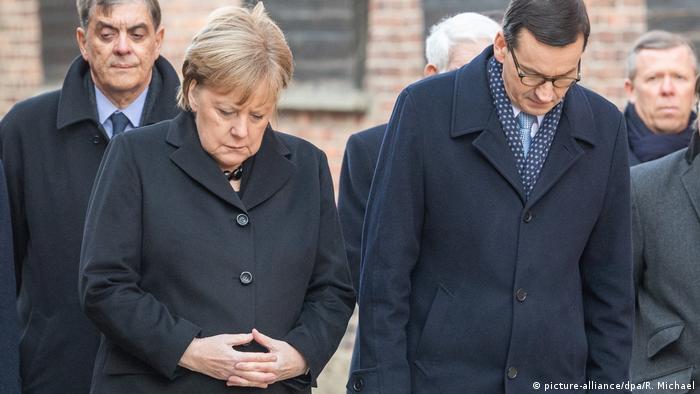 Merkel visited the courtyard where thousands of Poles were murdered

Read more:  'Auschwitz did not begin in Auschwitz'

Just minutes before, the chancellor had viewed what may be the most devastating testimonial to the industrial murder perpetrated by the Nazis at Auschwitz-Birkenau: The building housing the personal belongings of people sent to their deaths at the camp. She saw enormous mounds of human hair, thousands of pairs of glasses and a mountain of suitcases. Journalists were not allowed to accompany the chancellor on this part of her tour. A short video produced by the memorial site showed the 65-year-old chancellor staring at the mountain of suitcases, still bearing tags with the names of their former owners. 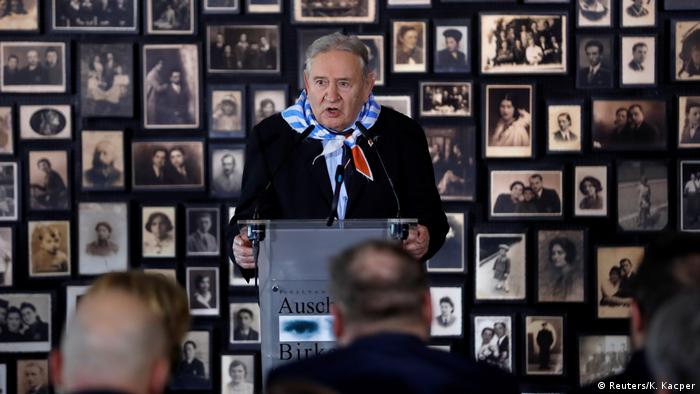 "This was the antechamber to hell," Bartnikowski said during the chancellor's visit

An hour later, Merkel sat in what has come to be known as the Central Sauna at the Birkenau death camp, with her delegation and her Polish hosts. Recently restored, this was the room where new prisoners were ordered to undress and clean themselves.

Holocaust survivor Bogdan Stanislaw Bartnikowski attempted to take the attendees back in time to August 13, 1944 — the day he entered the room for the first time, with his mother. Now 87, Bartnikowski spoke of the shame he felt in having to undress in a room full of women, and of the stench of fear.

"We were prisoners, we were subhuman," he said. "For us, this was the antechamber to hell."

Bartnikowski's words are some of the most haunting to be uttered on this day. They also remind those present of the importance of eyewitnesses to the Nazi atrocities. Of the importance of those who can tell the world what truly happened. It is a group of people that shrinks by the day.

Merkel thanked all those who speak of the trauma they experienced, "Thank you for your courage and your powerful ability to forgive."

"To stand here and speak to you today as Germany's chancellor is anything but easy for me. I feel a deep sense of shame," she said. Confronted with such "barbaric crimes" can leave a person without words, Merkel said. "But speechlessness cannot be our only answer. We must remember these crimes."

To that end, Merkel said Germany would provide the Auschwitz-Birkenau Memorial and Museum with a further €60 million ($67 million) in funding so that the ruinous remains of the site and the personal belongings found there can be preserved as a reminder to coming generations.

Polish representatives emphasized their own responsibilities as well.

"We, the Polish people and the republic, are fulfilling our responsibility to maintain these memories," read a statement sent by Polish President Andrzej Duda. "And we say: Never again. Never again shall anything similar be allowed to happen."

Prime Minister Morawiecki, speaking ahead of Merkel, also underscored his country's obligation to keep the memory alive and to protect it. In her address, Merkel made clear that while the death camp is in Poland, the crime committed there were perpetrated by Germans: "The village of Oswiecim is in Poland. Auschwitz was a German death camp, run by Germans."

Nothing that "it happened, thus, it can happen again," Merkel echoed the words of Holocaust survivor Primo Levi (1919-1987): "We all bear responsibility. We can never forget."

Addressing the alarming increase in racism, hate crimes, intolerance, xenophobia and anti-Semitism, Merkel said, "We cannot tolerate anti-Semitism. That is something that Auschwitz demands of all of us."

Following Helmut Schmidt (in 1977), and Helmut Kohl (in 1989 and 1995), Merkel became just the third German chancellor to visit Auschwitz. She is the first to travel to Poland solely to visit Auschwitz and not to continue on to Warsaw.

As the early afternoon sun set, Merkel's journey through the darkest chapter of German history also came to a close. She saw the ruins of the gas chambers and the remnants of Birkenau's crematorium. She stood in front of a rail car parked at the camp's train platform, where more than 1 million people stepped off of trains and to their deaths.

As Merkel left, candles flickering in the dark served as a reminder of the people who lost their lives at Auschwitz-Birkenau. 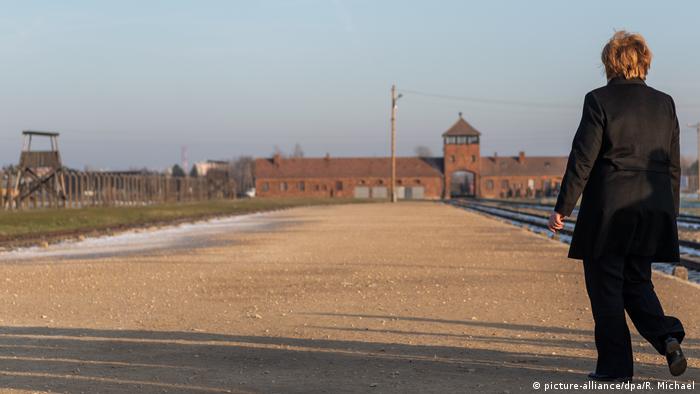 A German art-activist collective has apologized after a public outcry over a "tasteless" memorial it erected in Berlin that claims to contain the ashes of Nazi victims. "We made mistakes," the group said. (04.12.2019)