Angela Merkel made her first official visit to Auschwitz-Birkenau on Friday after 14 years as Germany's chancellor.

Polish Prime Minister Mateusz Morawiecki accompanied her, as well as former prisoners and the representatives of various Jewish organizations.

The International Auschwitz Committee has called Merkel's visit an "especially important sign" of solidarity with those who survived the horrors of the Holocaust.

Merkel spoke at the Birkenau death camp, saying the horror of the Holocaust was "unfathomable." She stressed the fact that the perpetrators were German and that the country had an obligation to the victims to stand up to the responsibility.

"I am filled with deep shame in the face of the crimes that were committed here by Germany," she said, later adding that remembering the crimes and acknowledging responsibility is an "inseparable part" of Germany's national identity.

Germany has a "duty to protect Jewish life," she noted, adding that "anti-Semitism will not be tolerated."

She also visited the Death Wall at the Auschwitz portion where SS soldiers shot thousands of people, the majority of them Polish political prisoners. The execution site is an important national place of remembrance.

The trip marks the 10th anniversary of the creation of the Auschwitz-Birkenau Foundation, which preserves the site. Merkel announced that Germany will donate €60 million ($67 million) in financial assistance to the foundation. 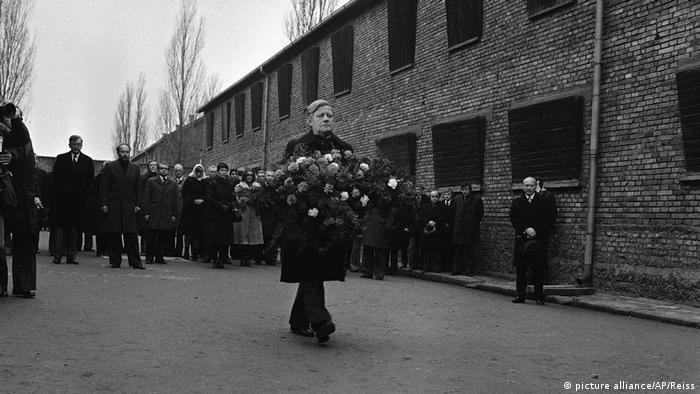 It was on an overcast November day in 1977 that former Chancellor Helmut Schmidt made the first visit by any high-ranking German politician — let alone a chancellor — to the site of the Nazi concentration camp and extermination center.

"This is a place that commands silence," Schmidt began his speech. "Yet, I am certain the German chancellor cannot remain silent here." From the day Auschwitz received its first prisoners in 1940 until the day it was liberated by Soviet forces in 1945, Nazi Germany killed more than 1.1 million people there.

In his address, which was broadcast live on Polish television, Schmidt — who had received an Iron Cross for his service in the German military during World War II — said Poland, where the Nazis had built the camp,  "had suffered the most" before addressing his own nation's guilt. "There is no escaping the realization that politics requires an ethical basis and a moral order," he said.

In November 1989, overjoyed Germans were celebrating the fall of the Berlin Wall. Those events caused Kohl to cut a visit to Warsaw short so that he could return to Germany. But, shortly thereafter, Kohl went back to Poland to, among other things, visit Auschwitz, something he said was of paramount importance to him.

Speaking in his role as the chairman of the Christian Democrats (CDU) on November 6, 1989, Kohl had called Auschwitz a "minefield." Still, he said, nearly 45 years after the liberation, "it is simply overdue that Germany attempt to found a memorial at Auschwitz."

Once there, Kohl wrote in the guestbook of the "unspeakable suffering" of many peoples "in Germany's name." He specifically mentioned Jews — which Schmidt had failed to do. "Here we renew our promise to do all we can to ensure that life, dignity and the right to liberty remain unharmed on this earth, no matter what god a person prays to or what people they belong to or are descended from," he wrote.

Scheduling obligations and inclement November weather ultimately cut Kohl's visit short. German newspapers reported on Kohl's "quick visit," which they described as a "compulsory exercise" without so much as a speech. 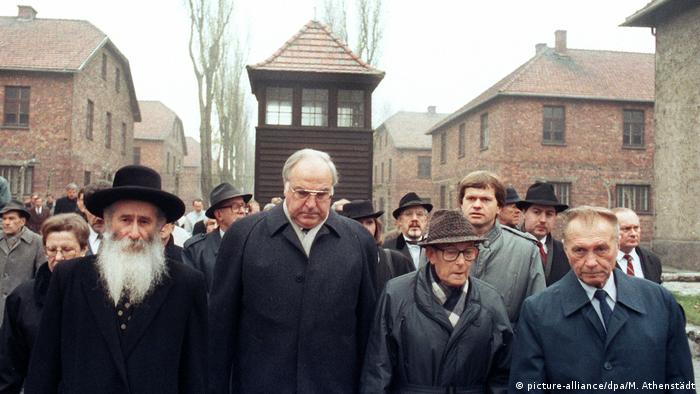 Kohl, however, said seeing Auschwitz had deeply affected him. "The image of that place, one that has been completely robbed of all words, must be taken in physically," Kohl told the CDU after his return. He spoke of the train platform at Auschwitz-Birkenau where Nazi German soldiers had made their "selections" — instantly determining who would live and who would die.

"A man told me how he stood there and looked at his mother and his wife for the very last time," Kohl said. "There is a difference between discussing such things theoretically and standing together with someone who experienced them. It is a place where one dare not speak."

Kohl also visited the death row cell of Maximilian Kolbe, a Polish Franciscan friar who volunteered to be executed in the place of a man who had children, thus saving the other prisoner's life. "One does not need a guide to understand that this was a place where the unthinkable became reality," Kohl said.

Later, Kohl told the Bundestag that "the darkest and most horrific chapters of German history were written at Auschwitz and Birkenau."

In July 1995, Kohl returned to Auschwitz. He had just come back from a monthlong visit to Jerusalem. Standing alongside Polish Foreign Minister Wladyslaw Bartoszewski, who had been imprisoned at Auschwitz from September 1940 to April 1941, Kohl and Bartoszewski laid a wreath at the international monument at Birkenau. "The suffering and death, the pain and the tears of this place, leave us speechless," Kohl wrote in the guestbook on that visit. "Commemorating together, mourning together and acknowledging our will to be together — that is our hope, our path."

Bartoszewski, who died in 2015, helped create the Auschwitz-Birkenau Foundation.

Clear signs of solidarity with the Jewish community and the cautionary historical lessons of Nazi Germany's crimes have been cornerstones of Merkel's chancellorship. She has visited Israel's Yad Vashem — The World Holocaust Remembrance Center five times. In 2009, she and US President Barack Obama visited the Buchenwald concentration camp, and in 2013 she traveled to the Dachau concentration camp with survivors. She returned to Dachau in 2015, on the 70th anniversary of its liberation.

When visiting the Dachau concentration camp in 2013, Merkel said Germany had an "enduring responsibility" after the "horrible and unprecedented chapter of our history": "Sites like these caution each of us to help ensure that such things never happen again. That no one can simply look on, shrug their shoulders or even cheer when people are disadvantaged, harassed and persecuted, only to be left alone to fear for their lives."

German activists who installed the memorial say it contains a soil sample with the human remains of Holocaust victims. The group wants to send a message to Angela Merkel's conservatives: Don't work with the far-right. (02.12.2019)

Angela Merkel in Auschwitz: 'I am filled with deep shame'

Merkel paid a solemn visit to the site of the Nazi concentration camp and extermination center Auschwitz-Birkenau — her first official visit at chancellor. "We must preserve this testimony," she urged during her trip. (06.12.2019)