A German delegation has laid a wreath at the former Auschwitz-Birkenau death camp. Amid the commemoration, Foreign Minister Heiko Maas has warned Germany's Holocaust memory is under "pressure from the extreme right." 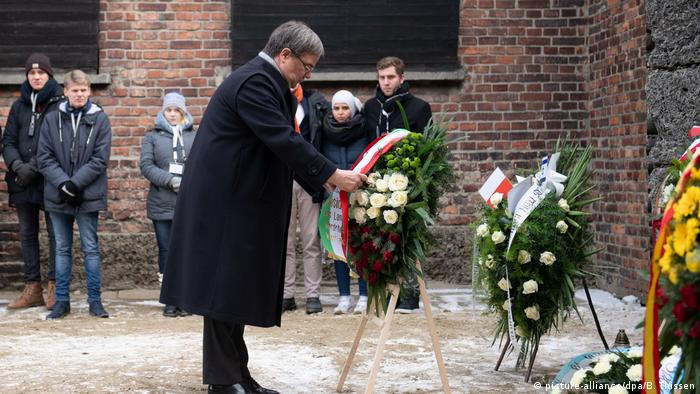 A German delegation led by Armin Laschet, the premier of Germany's most populous state, North Rhine-Westphalia, marked International Holocaust Remembrance Day at the site of the Auschwitz-Birkenau death camp on Sunday.

Laschet laid a wreath at the camp's execution wall along with a group of young German Jews, Muslims and Christians.

"Auschwitz shows what can happen when people's worst qualities come to bear," Laschet said. "The inconceivable crimes of the past must be a warning and an obligation for every new generation," he added.

Some Polish survivors wore a red "P" on their uniform, the mark Nazi guards gave them to identify the prisoners as Polish.

More than a million people, the vast majority Jews, were murdered at Auschwitz-Birkenau during World War II. Nazi forces held many Polish prisoners there before converting it into a death camp when the war broke out.

In a guest column for Germany's Die Welt newspaper,  Foreign Minister Heiko Maas, noting a recent rise in anti-Semitism in Germany, wrote that the country's "culture of remembrance is crumbling" amid "pressure from the extreme right."

Maas cited a CNN study that found 40 percent of young Germans don't know much about the Holocaust. "These are shocking figures that we can't idly resign ourselves to," he said.

Schoolchildren needed "new approaches" so that they not only remember the crimes of Nazi Germany, but also learn present-day lessons from them, he said.

A day earlier, German Chancellor Angela Merkel said it was Germany's responsibility to show "zero tolerance" toward xenophobia and all forms of anti-Semitism.

"There can never be forgiveness for the terror and suffering of Jewish children during the dark years of World War II," he said.

"But there can be reconciliation between the German people and the Jewish people today, and there is no better example of reconciliation than what you are doing here, throughout Israel."

ARSP works with Holocaust survivors and their descendants to promote international peace. It was founded in 1958 in Germany to confront the country's Nazi past.

Germany has officially observed January 27 as Holocaust Remembrance Day since 1996. The United Nations declared it an international day of observance in 2005.

Germany's top diplomat, Heiko Maas, has urged respect for human dignity on a visit to Auschwitz. He said Germany's responsibility for the attrocities committed at the Nazi death camp would never end. (20.08.2018)

International Holocaust Remembrance Day: It's not about guilt, but about responsibility

My generation grew up knowing about the Holocaust, says DW's Felix Schlagwein. But we need to talk more about it today — especially because it goes against the grain for many people. (27.01.2019)