Germany's foreign minister has said hopes to increase EU-Belarus ties during a visit to Minsk. It was the first time in seven years that a German foreign minister held bilateral talks with the Russia-allied country. 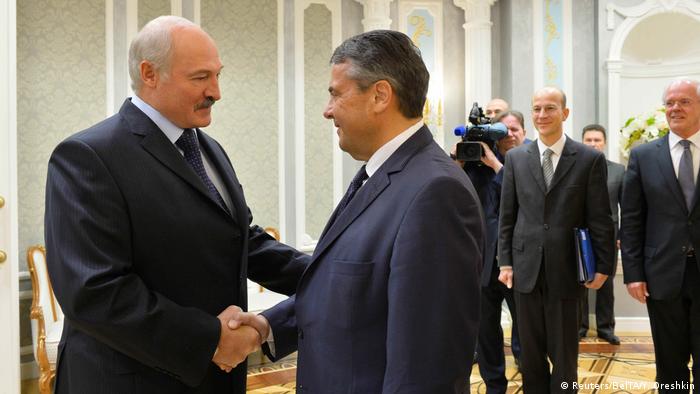 German Foreign Minister Sigmar Gabriel met with Belarusian President Alexander Lukashenko in Minsk on Friday in an effort to improve relations with the former Soviet nation.

"I hope that your country will become a member of the Council of Europe someday," Gabriel said, adding that he encouraged Lukashenko to join an EU summit with eastern European partners on November 24.

Read more:'More arbitrary arrests than ever before': Why there's no reason for optimism in Belarus

The German foreign minister noted that there are still "difficult topics" between the bloc and Russia-allied Belarus, including issues of human rights, the death penalty and democracy.

Lukashenko, who was on the European Union's sanctions list until 2016, also voiced his readiness to boost ties with Brussels.

"I sincerely hope that we can turn a new page in our relationship," Lukashenko said. He has led the country for 23 years with strong support from Moscow.

"There will never be signals from Belarusian territory that the inviolability and security of the European continent will be disturbed," he added.

Gabriel is the first German foreign minister to hold bilateral talks with Belarus in seven years.

Read more: Belarusian opposition vows to fight on amid clampdown

Belarus as 'bridge' between Moscow and Brussels

Gabriel said he hopes that Belarus can serve to link the European Union and the Moscow-dominated Eurasian Economic Union — which includes Armenia, Belarus, Kazakhstan, Kyrgyzstan and Russia.

"We have an interest that Belarus can be something like a bridge between the EU and the Eurasian Economic Union," Gabriel said after talks with the Belarusian president.

Belarusian Foreign Minister Vladimir Makei, who also met with Gabriel, said that although Russia will remain Belarus' main partner, "we cannot ignore the other large region in our neighborhood."

Early last year, the EU lifted most of the sanctions it had imposed in recent years against 170 individuals in Belarus, including longtime leader Lukashenko, to encourage improvements in human rights.

Belarus is the last remaining country in Europe to enforce the death penalty which is often carried out with a shot to the back of the head.

Anti-Semitism lives on in Belarus, despite small number of Jews

Skinheads in Belarus who desecrated a memorial for Holocaust victims have received jail sentences for hooliganism. Despite a dwindling number of Jews, anti-Semitism remains a problem. (13.06.2017)

The leaders of Ukraine and Belarus have toured the site of the 1986 Chernobyl nuclear accident, marking the 31st anniversary of the disaster. Debate continues over the death toll from radiation poisoning in the region. (26.04.2017)