European Union agrees to end nearly all sanctions on Belarus

The European Union has lifted almost all sanctions on Belarus, including those against President Alexander Lukashenko, paving the way for closer relations. An arms embargo, however, remains in place. 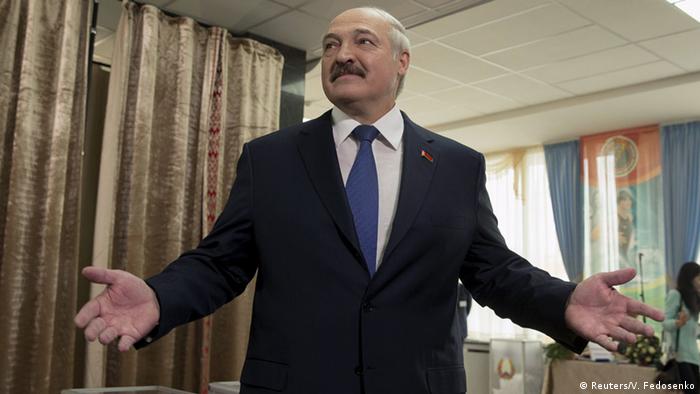 Despite criticism from human rights activists, most of the European Union's economic sanctions against Belarus will be permanently lifted, agreed EU foreign ministers during a regular meeting in Brussels on Monday.

"There is an opportunity for EU-Belarus relations to develop on a more positive agenda," the foreign ministers said in a joint statement.

An arms embargo, however, will remain in place for another 12 months.

The bloc's ministers recognized that Lukashenko delivered on his promise to release the last political prisoners he had detained. They called it a "long sought step."

Belarus' Foreign Ministry welcomed the EU's decision, saying: "(This) clearly proves that only dialogue is the most effective tool for settlement of disputes," ministry spokesman Dmitry Mironchik said in a statement.

"This decision marks an important phase on the way towards full normalization of relations and opens new possibilities for broadening comprehensive interaction between Belarus and the EU," the statement said.

In October, the EU already ended travel bans and asset freezes against the 170 individuals and have now decided to make the decisions permanent.

"I think that what we have on the table today is a good compromise," said Swedish Foreign Minister Margot Wallstrom, who lobbied for maintaining the sanctions against Minsk.

The remaining sanctions make it easier to leverage pressure on Minsk should the human rights situation once again deteriorate, said an EU diplomat on condition of anonymity.

Dubbed Europe's "Last Dictator" by the United States and in power since 1994, Lukashenko's political prisoner release was hailed as a major step forward for the former Soviet state.

Rights groups still worry that Belarus continues to fall short in the areas of democracy and human rights, including the existence of the death penalty, a practice which is opposed by the EU.

Minsk is considering economic reform in exchange for a possible $3 billion loan from the IMF, Belarus officials say. The deal would offer better value than the usual bids from Moscow, according to President Lukashenko. (01.12.2015)