Russia, Kazakhstan and Belarus have formed a Eurasian Union - without Ukraine. Experts have yet to agree on whether the union can remain both efficient and stable in the long run. 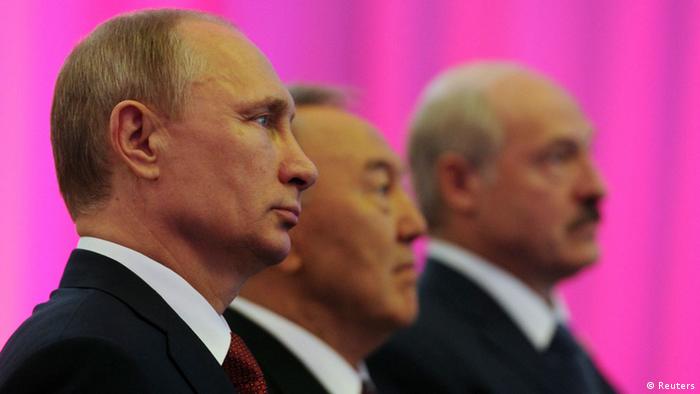 Some are reminded of the Soviet Union - others, of the European Union. To some extent, both integration models were the inspiration for the Eurasian Economic Union (EAEU). The union's creation by January 1, 2015, was sealed Thursday (29.05.2014) by the presidents of Russia, Kazakhstan and Belarus in Kazakhstan's capital, Astana.

This timing is related to the current Ukraine crisis. Russian President Vladimir Putin has made various attempts to bring his large Slavic neighbors into the fold of his EU counter-project. At the end of 2013, under pressure from Moscow, then-Ukrainian President Viktor Yanukovych decided not to sign a fully-negotiated association agreement with the EU. In doing so, he sparked a revolution that would eventually sweep him out of office. And with that revolution, it became clear Ukraine would not participate in the Eurasian Economic Union. 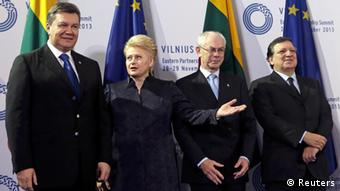 As a result, there are currently only three countries that plan to extend the customs union, which was established in 2010, to include even greater economic and political cooperation.

Andrej Susdalzev at the Moscow Business School described the strategic goal of the project, saying that, in Russia's eyes, "Russia cannot be a great power without its own rapidly developed integration group."

But according to Vladimir Sharichin, deputy director of the Kremlin-associated CIS institute, this is definitely not an attempt to restore the Soviet empire. Each country involved is on its way toward a market economy, he says, and together they seek to create as large and efficient a common economic space as possible.

Sharichin told DW that a stagnating economic alliance between the EU and Russia is one of the reasons for the establishment of the Eurasian Economic Union. He even thinks the US is envious of the new agreement.

Russia has decided to pursue its own integration project, he said, particularly because economic globalization has led to the creation of "large economic clusters." He cited the EU, NAFTA in North America and Mercosur in South America.

Sergei Prichodko, managing director for the business-liberal Gaidar Institute for Economic Policy, also sees economic motives as behind the EAEU's foundation. But he sees other nuances, as well.

For many Russian, Kazakh and Belarusian companies, Prichodko said, business connections from the Soviet era are often the only opportunities to cooperate internationally. "Put simply, it means that nobody wants our products, with the exception of long-standing customers. That's why this cooperation is of mutual utility for the moment."

No EU cooperation - yet

Susdalzev is convinced that closer association with Russia is in the fundamental interest of its neighbors. "Belarus couldn't survive for a week without this integration," he said.

Vladimir Richin at the CIS Institute agreed. Both Moscow experts stressed that neither the existing customs union nor the EAEU were created to seal the countries off from the EU, but rather to be compatible and cooperative with it.

However, their view is not one that is shared by the managing director of the German private-sector Committee on Eastern European Economic Relations.

"There are difficulties when it comes to compatibility - for example, with the WTO," Rainier Lindner, who is on the committee, told DW. He added that the two sides should not face off with each other as irreconcilable blocs.

The Eurasian and European unions will need to develop an approach to economic and trade policy, Lindner says. "This hasn't been accomplished yet. That's a task for coming years."

Prichodko does not believe, however, that the EAEU will be a stable and efficient union - a fact which has nothing to do with Ukraine.

The countries currently involved vary widely, both politically and economically - as do potential candidate countries Armenia and Kyrgyzstan.

Susdalzev agrees, saying that with regard to Kazakhstan and Belarus, in-depth integration with the authoritarian regimes there is difficult to imagine. Relinquishing competencies and domestic sovereignty to a supranational union runs counter to the desire of rulers seeking to maximize their power.

However, for Russia to achieve its geopolitical objectives, it has no choice but to engage with these countries.

It's not the Eurasian Economic Union that's a danger to Europe, but the Eurasian ideology behind it, writes DW's Ingo Mannteufel. (29.05.2014)