Russia and Belarus have moved toward a rapprochement after a series of disputes between the traditional allies. It comes as both countries have cracked down on rare street protests. 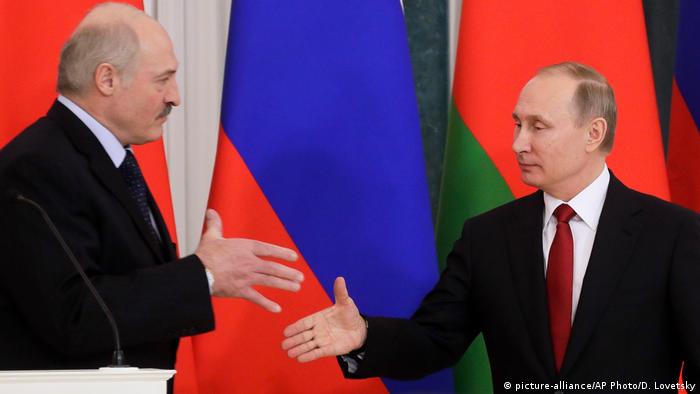 Russia and Belarus on Monday settled an energy dispute that has strained relations, indicating they are moving closer at a time when both countries are contending with protests and renewed Western sanctions.

Russian President Vladimir Putin and Belarus' authoritarian leader Alexander Lukashenko met in St. Petersburg, just as the city was hit by a deadly bombing at a metro station, to negotiate a settlement to an oil and gas dispute.

The traditional allies have recently clashed over energy as Belarus flirted with the West and criticized Russia's annexation of Crimea. A rapprochement suggests Russia is trying to move Belarus back into its orbit.

Under a deal reached Monday, the two leaders agreed that Belarus would pay $720 million (675 million euros) in arrears for gas supplies and Russia would refinance Belarus' debt.

Russia also said it will renew oil supplies of 24 million tons a year to Belarus and that state oil giant Gazprom will provide Belarus discounted gas supplies in 2018 and 2019. Russia had cut oil supplies and subsidies that kept Belarus afloat due to dwindling coffers when oil prices fell and Minsk's failure pay outstanding debt.

"Today we have no differences remaining. We will move ahead, we will strengthen our relations within the framework of the union state," Putin said at a joint news conference.

The deal comes as Belarus has faced a wave of recent protests against the country's poor economic management under Lukashenko, whose has ruled for 23 years. Hundreds of protesters and opposition figures have been arrested.

Last month, Russia was also hit by rare anti-corruption demonstrations in which hundreds of people were rounded up.

The crackdown in Belarus threatens its attempt to court the European Union, which last year dropped most sanctions it had imposed on Minsk over its human rights record and repression of political dissent.

"We see what's happening around us, and we just want to preserve the stability of Russia and Belarus," said Lukashenko.

"There are too few quiet, calm spots on the planet still left. So we agreed on joint measures to preserve the security of our states."

Belarus cracks down on mounting protests

Belarusian police have arrested hundreds of people after its president warned of a Western plot to oust him. Mounting protests against the authoritarian president have drawn thousands of people in recent weeks. (25.03.2017)