News of a potential breakthrough to end the ongoing conflict in eastern Ukraine has been greeted as a positive step in Moscow and Berlin. Opposition in Kyiv, however, called it capitulation. 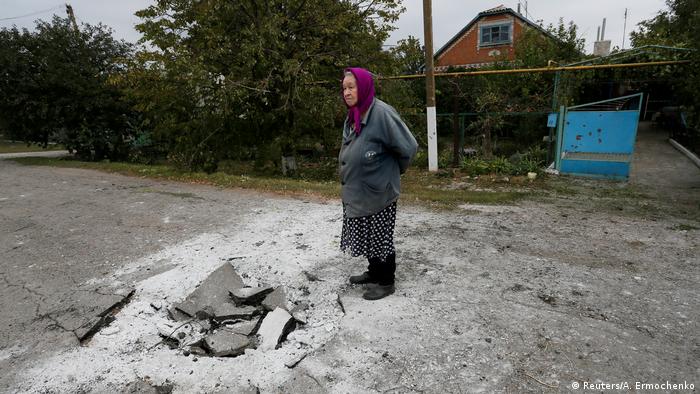 News of an agreement reached Tuesday between Ukraine and pro-Russia separatists was met with optimism in Russia and Germany on Wednesday. The agreement opens the prospect of new talks aimed at ending the five-year conflict in Eastern Ukraine.

Ukrainian President Volodymyr Zelenskiy, who agreed to allow local elections in the contested Donbass regions of Luhansk and Donetsk to pave the way for new negotiations, said it was a major step toward resolving a conflict that has killed 13,000 people.

A spokeswoman for German Chancellor Angela Merkel called the breakthrough an "important step," adding, "We welcome in particular the commitment of Ukrainian President Zelenskiy, who took constructive steps forward in the interest of a peaceful solution in Donbass."

Kremlin Spokesman Dmitry Peskov underscored the positive aspect of both sides agreeing to the so-called Steinmeier formula — named for a plan put forth by German President Frank-Walter Steinmeier — ahead of talks in Minsk, the capital of Belarus. Minsk was also the site of the original 2015 peace agreement between Russia and Ukriane. The deal was mediated by France and Germany.

On Tuesday, Macron said he hoped that such a "Normandy format" summit could happen within weeks.

Much at stake for both sides

Zelenskiy has long signaled his willingness to meet with Putin to bring a peaceful resolution to the standoff, ending the daily killing of Ukrainian soldiers. Russia, for its part is keen to resolve the issue in hopes of seeing Western sanctions eased.

Those sanctions, leveled by the US and the EU for Russia's 2014 annexation of Crimea and backing of separatists in the Donbass, have been disastrous for the Russian economy.

Not everyone, however, reacted so positively to the news. Former Ukrainian President Petro Poroshenko called the new approach "the Putin formula," saying it played into the Russian leader's hands by opening the prospect of lifting sanctions.

Yulia Tymoshenko, a former Ukrainian prime minister, warned that the deal could end with Ukraine becoming a "Russian colony."