Ukrainian President Volodymyr Zelenskiy, who has said resolving ongoing disputes with Russia would be his top priority, has called for internationally mediated talks. Moscow says it will consider the request. 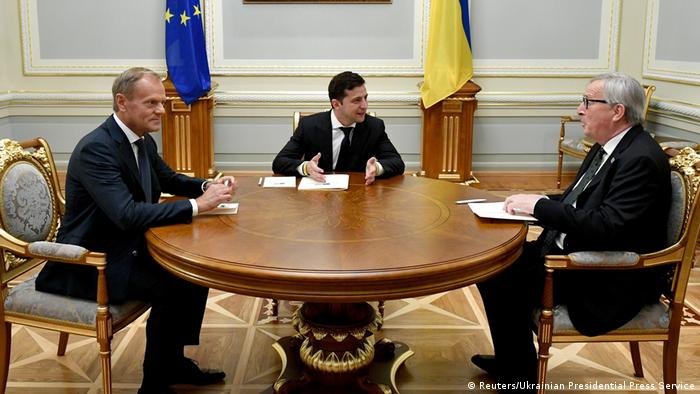 Zelenskiy made the invitation via YouTube, saying: "Now I want to address Russian President Vladimir Putin. We need to talk? We do. Let's do it."

In the address, which came as EU leaders Jean-Claude Juncker and Donald Tusk were set to arrive in Kyiv, Zelenskiy proposed: "I suggest the following lineup for talks: me, you, US President Donald Trump, British Prime Minister Theresa May, German Chancellor Angela Merkel, and French President Emmanuel Macron."

Zelenskiy was also clear about the topic of the meeting: "Let's discuss who Crimea belongs to and who isn't in the Donbass region."

Eastern Ukraine – hopes that peace could be within reach

Kremlin Spokesman Dmitry Peskov called the proposal an "absolutely new format." Peskov said the proposal would be reviewed, adding: "This is a new initiative. Of course it will be considered, but so far I can't express any reaction."

Zelenskiy and Putin have never met, but during his inaugural address in May, the Ukrainian president vowed that resolving his country's conflict with Russia would be his top priority.

No end in sight for five-year conflict

The conflict began in March 2014, when pro-Russian separatists staged an uprising in eastern Ukraine's Donbass region after pro-Kremlin President Viktor Yanukovich was forced to flee the country in February 2014. The actions took place shortly after Russia annexed the Crimean Peninsula in February and March 2014, sparking international condemnation.

Since then, some 13,000 people have been killed in eastern Ukraine. Russia has strongly denied any involvement in the region, despite ample evidence that it has continually shipped arms and troops into the area.

Though peace talks involving Ukraine, Russia, France, and Germany resulted in the so-called Minsk Agreements in 2014 and early 2015, both sides have violated the terms of the ceasefire agreement, and the situation remains at an impasse.

Tusk, who will soon be leaving his post, said it would likely be his last trip to Kyiv, noting: "There are some in Brussels who brand me a pro-Ukraine maniac. They often said it right to my face. To be honest, I'm very proud of that epithet."

The EU has been unapologetically supportive of Ukraine, issuing sanctions against Russia in an effort to force its hand. Tusk underscored the deteriorating state of the situation, saying "The tragedy in eastern Ukraine continues with disastrous humanitarian consequences for local people trapped by Russia's war."