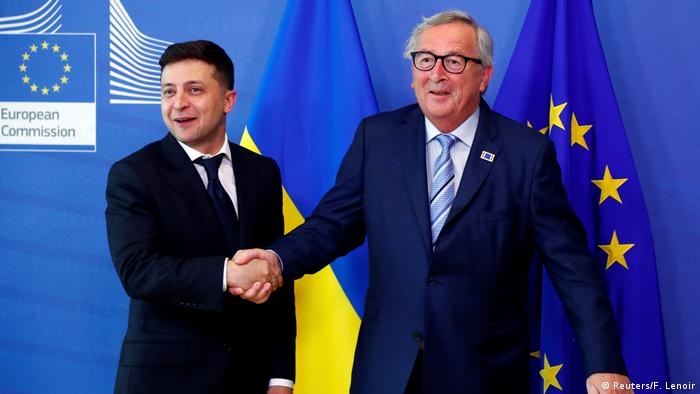 During his visit to Brussels on Tuesday, newly elected Ukrainian President Volodymyr Zelenskiy said his country still aspires to being a member of both the European Union and the NATO military alliance and that he is open to peace talks with Russia.

European Commission President Jean-Claude Juncker and NATO Secretary-General Jens Stoltenberg had been waiting to hear the foreign policy aims of the former comedian, who was sworn in as Ukraine's president last month.

On May 20, Zelenskiy was sworn in as the 6th president of Ukraine, which gained independence from the Soviet Union in 1991. Zelenskiy collected 73% of the vote in Ukraine's presidential election in April, defeating incumbent President Petro Poroshenko.

Before his presidential run, Zelenskiy was most famous for his role on Ukrainian political satire television show "Servant of the People," in which he played the president of Ukraine.

Ukraine is still grappling with Russia's 2014 annexation of the Crimean peninsula and an ongoing conflict against pro-Russian separatists in eastern Ukraine. The conflict has killed 13,000 people so far.

France and Germany helped broker the Minsk agreement, which ended major combat in the region, in 2015. Deadly clashes still occur regularly, with both Ukraine and the separatists accusing each other of violating the truce.