Russian President Vladimir Putin has marked the fifth anniversary of the annexation of Crimea with a visit to the region. Moscow is making a show of its efforts to improve infrastructure on the Black Sea peninsula. 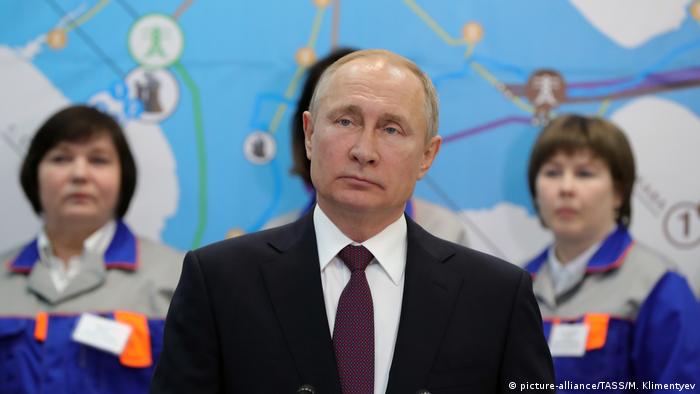 The Russian president inaugurated two new power stations on Monday, as Russia celebrated the fifth anniversary of its annexation of Crimea.

Moscow has funneled significant resources into the peninsula's infrastructure since the annexation referendum in 2014, in an effort to end Crimea's dependence on Ukraine.

As well as the power stations, a giant bridge was built from southern Russia to Crimea, across the Kerch Strait.

Russia has officially proclaimed March 18 as the "Day of Crimea's Reunification with Russia," with events celebrated across the country. The day is the anniversary of the signing of an agreement between Putin and local Crimean representatives, two days after the referendum that was condemned as illegitimate by Ukraine and the West.

A show of Russian power

Putin personally attended the launch of a power station in the city of Sevastopol, and oversaw the inauguration of a facility in Simferopol by video conference.

"Today yet another important step has been made to strengthen the energy security of the Crimean Peninsula, as well as the entire Russian Federation, for the development of the economy and infrastructure of the region," Putin said at the inauguration in televised comments.

The power plants were at the center of a scandal that embroiled German engineering company Siemens, which said Russia had delivered several Siemens-made turbines there, in a breach of international sanctions.

Although the power stations were partially opened last year, Monday's launch marked the first time that they would start operating at full capacity.

In Crimea, the day is a public holiday. Russian flags flew in Crimea's main city of Simferopol, where authorities set up a stage for anniversary celebrations. Posters with the worlds "Five years of Crimea returning to its native land" hung on shop windows and public transport.

"There is a growing understanding in the world that Crimea is a part of Russia," the speaker of Russia's upper house of parliament, Valentina Matviyenko, said in a Monday commentary for the Russian newspaper Izvestia.

Most countries have not recognized the Russian-supported referendum for the annexation as legitimate, and the Western defense alliance NATO reiterated its condemnation of the annexation on Monday.

"Russia used force against Ukraine to illegally and illegitimately annex Crimea. This violation of Ukraine's sovereignty and territorial integrity is a serious breach of international law," NATO said in a statement.

The West, including the European Union and the United States, has imposed economic sanctions against Russia since the annexation, with Moscow retaliating.

Since the annexation, the value of Russia's rouble currency has about halved in comparison with the US dollar.
​​​​​​​Read more: Could Russia and Belarus trade oil for national sovereignty?

Russia claims the annexation was the righting of a historic wrong, with the peninsula transferred to Ukrainian control in 1954 by the then Soviet leader Nikita Khrushchev. While part of Ukraine after the dissolution of the Soviet Union, it remained the site of a major Russian naval base at Sevastopol, with Russia paying a lease.

rc/msh (AP, AFP, dpa, Reuters)
Each evening at 1830 UTC, DW's editors send out a selection of the day's hard news and quality feature journalism. You can sign up to receive it directly here.

EU, Canada and US impose new sanctions on Russia

The EU, Canada and the US have announced new sanctions targeting individuals and companies. They come in response to Russia's actions in the Kerch Strait, the detention of Ukrainian sailors and the annexation of Crimea. (15.03.2019)