Western sanctions on Russia: Lots of noise and little impact | Europe | News and current affairs from around the continent | DW | 05.04.2018

The EU and the US have imposed wave after wave of sanctions on Russia since the beginning of the Crimea crisis in 2014. However, the Kremlin is sticking to its course and Vladimir Putin's power has only grown. 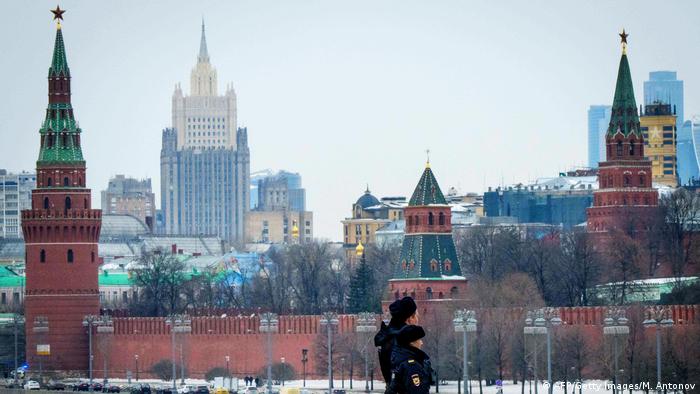 The US is preparing fresh sanctions against Russian oligarchs and people close to President Vladimir Putin, according to reports on Thursday. Many such measures are already in place, with western governments targeting a whole range of individuals, companies, banks and other organizations in Russia.

However, the impact of Western sanctions on Russia's economy has so far been rather insignificant, says Andrey Movchan, Moscow-based head of economic programs with the Carnegie Foundation.

"I would say that the actual effect of the sanctions on the GDP has been negligible; a high estimate is at half a percent and it’s probably closer to zero," he told DW.

According to Movchan, sanctions related to high-tech imports do pose a real problem, especially in Russia's vital weapons and oil industries. However, the impact of these restrictions would only hurt the economy two or three years in the future, when the companies are unable to reach their development goals.

While the Russian economy contracted in 2015 and 2016, it has shown growth in 2017, and most of the previous slump was caused by a drop in oil prices. Moreover, many Russians judge the country's relatively stable economic performance against the memories of the disastrous crisis in the 1990s, before Vladimir Putin took power.

By imposing sanctions, the EU and the US aim to punish Moscow and score a change in its policy over the annexation of Crimea, the fighting in eastern Ukraine, the alleged election meddling, and — most recently — the poisoning of Sergei Skripal.

There, too, they appear to be ineffective. Not only has the Kremlin held its political course since 2014, but the sanctions have actually helped Putin strengthen his grip on power, experts say.

"Effectively, the sanctions have been one of the major reasons for the increase of support to the central government and the Kremlin in Russia," Movchan explained. "Sanctions have been a clear evidence of the West's hostility, and the majority of the population took that as an unjust declaration of war against Russia, in the economic sense, of course."

Denis Volkov, an expert with Russia's independent pollster Levada Center, offers a slightly different perspective. According to him, Moscow's assertiveness on the international stage was the key factor in boosting Putin's ratings.

"Yes, there was a sense of mobilization around Putin over sanctions, but that is not the main thing," he told DW. "The main thing is this feeling, after the Crimea annexation, that Russia once again became a great power and can lead any foreign policy it likes, regardless of criticism or Western sanctions."

Read more: How ex-spy Vladimir Putin rose to power and held on to it

Either way, Putin approval ratings have grown parallel to the escalation with the West.

According to the Levada analyst, Putin's approval ratings have reached their lowest point at 60 percent around 2012. Moreover, around half of Russian voters at that time said they would prefer a new leader, given a good candidate. After the Crimea annexation, Putin's ratings topped 90 percent and he won over 76 percent of the vote in the presidential election last month.

Give them 'carrots rather than sticks'

Meanwhile, several governments in Europe are worried about political and economic consequences of the showdown. Russia is bearing around 60 percent of the trade losses, while the other 40 percent is paid by the 37 different nations imposing the sanctions, according to a study by Germany's Institute for World Economy in Kiel that looked into data for 2014 and 2015. When it comes to losses in the West, Germany is the hardest hit.

The pressure of big business is clearly felt in Berlin. Responding to a DW inquiry, the Moscow-based German-Russian Foreign Trade Chamber reported that 94 percent of surveyed firms with interests in Russia would like to see the sanctions lifted.

Read more: Germany calls for EU countermeasures against US over sanctions to Russia

According to Movchan, the best course of action for the West would be to abandon the wide-reaching sanctions and focus on the sanctions targeting only certain people. But those measures would not be enough to persuade Kremlin to change course, the expert said.

Instead of punitive measures, the West should be "showing the advantages of the proper behavior of the country — giving them carrots rather than sticks," he told DW. However, he is not optimistic that the crisis would be resolved anytime soon.

"The future is in the hands of the bureaucrats on both sides," Movchan added. "But sanctions are usually imposed for long and we just started the process. I think this situation will last at least for a decade."