Stringent international sanctions imposed on Russia for its role in the Ukraine conflict have sucked the momentum out of the Russian economy over the past couple of years. The nation's growth prospects remain lethargic. 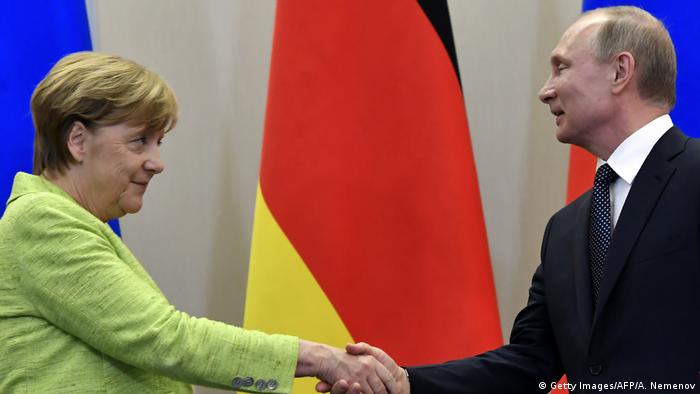 Talks between German Chancellor Angela Merkel and Russian President Vladimir Putin on Tuesday in the Black Sea resort city of Sochi focused mainly on geopolitical and security problems, such as the sanguinary conflicts in Ukraine and Syria. It was Merkel's first visit to Russia in two years.

It was widely anticipated that Western economic sanctions against Russia would also figure in the talks between the two leaders.

Merkel and Putin, however, did not explicitly bring up the sanctions issue at the press conference after their meeting, with the German chancellor simply saying she hoped some of the sanctions could be lifted if Moscow helped make significant progress in implementing the Minsk peace plan.

The Russian leader only referred to economic ties between the two nations, stating that "our cooperation makes a significant contribution to stabilizing the world economy."

Merkel has been a vocal proponent of the sanctions regime put in place by the EU and the US in the aftermath of Moscow's seizure of the Crimean Peninsula from Ukraine in 2014.

The measures were directed at national banks, weapons trade and the Russian oil and gas industry. In retaliation, Moscow has imposed its own embargo on Western agricultural products.

The sanctions have dented the Russian economy, which has also had to contend with the dramatic dip in crude prices in recent years.

Once hailed as a star performer among emerging economies, Russia is now struggling to come out of recession and post even puny growth.

And the number of Russians living in poverty has been ticking upward, reaching as high as nearly 20 million or over 13 percent of the population last year, according to the government's statistics agency Rosstat.

But Russian officials forecast a reversal in fortunes this year, projecting an expansion in the economic output of about two percent. Some market analysts are less sanguine about the growth outlook.

In its annual report presented in Thailand's capital Bangkok on Monday, the United Nations Economic and Social Commission for Asia and the Pacific (ESCAP) projected the economy to grow by a mere 1.1 percent.

"Relatively higher oil prices are projected to lift economic growth in the Russian Federation by 1.1 per cent in 2017 after last year's contraction of 0.2 per cent," the survey said.

The sanctions have also negatively affected Russia's trade partners in the West. Germany's commerce with Russia, for instance, plunged from 80 billion euros ($86 billion) in 2012 to 47 billion euros in the first 11 months of 2016.

Trade between the two countries, however, seems to be once again on the upswing, registering an increase of 37 percent to 10 billion euros in the first two months of this year, German business daily "Handelsblatt" quoted the East Committee of the German Economy as saying.

Following two years of recession, the Russian economy is slowly gaining momentum again. German businesses operating in the country are confident a rebound in bilateral trade activities is just around the corner. (24.02.2017)

Russia is running out of money

Low oil profits, sanctions and structural problems have got Russia's economy stuck in a crisis; their emergency reserves are drying up. Still, the conflict with the West could escalate. (14.04.2016)

Misery and luxury go hand in hand in Russia

When the going gets tough, the rich in Russia go shopping, but as the economy worsens there will soon be more up for sale than just luxury goods. Fiona Clark reports from Moscow. (10.02.2016)

In public, Russian officials appear defiant and stress that their economy has learned to adapt to the new environment.

They point out that products Russian firms used to procure from Europe are now bought from other countries such as China.

"Chinese suppliers are clearly at an advantage at the moment," VDMA's Monika Hollacher said in a statement. "They don't have to grapple with any sanctions and, when needed, provide their own financing offers to boot."

In a report published by the RUSI think tank last year, Felsner claimed that the difficult market environment in Russia for German companies was a result of "a perceived impact on the business climate, not of direct consequences for individual German firms."

Referring to a survey conducted by the German-Russian Chamber of Commerce, he said: "Some 75 percent of Russian and German business organizations are not affected at all by the Western sanctions directly in their own business."

Instead, Felsner lists the true reasons for the currently difficult market environment in Russia as follows: An absence of investment in Russian infrastructure and education; the weakening of Russians' ability to import technology due to a severe credit crunch since 2012; a lack of progress in productivity as well as insufficient advancement in the rule of law; a dramatic brain drain.

Despite the structural issues, some argue that closer trade ties between the EU and Russia would bring economic benefits to both sides.

Can Russian-German business ties be mended?

A study recently released by Germany's Bertelsmann Foundation says a comprehensive agreement between the EU and the Russia-led Eurasian Economic Community could lead to a 0.2-percent hike in real per capita income in the European Union.

It estimates that in the long run, such a deal could boost German exports by 31 billion euros annually and Russia's exports to the EU by some 71 billion euros.

But the study also acknowledged that a free trade deal of this kind would not be conceivable as long as the Ukraine conflict remains unresolved and international sanctions against Russia are in place.

The sanctions are due to expire this summer and the European Union is mulling over their extension.